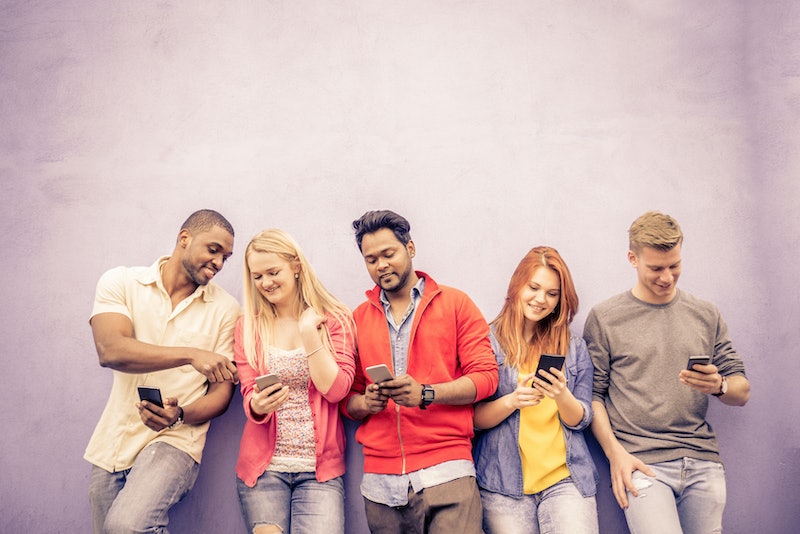 Dating is fun and all, but group dates are in again these days, too, especially with all the group dating apps out there. Not only do group dates take away from the pressure of one-on-one dates, but they’re also fun. Several brains are better than one, right? You may think you know all the local hot spots, but once you start a group chat in an app, you’ll soon realize the possibilities are endless. Plus, plenty can be social and not date-y, if that’s more your thing.

And, no two social/group dating apps are quite the same. After all, in general, there seem to be dating apps catered to everyone — adventure-seekers and travelers (like MeetMeOutside), ones where heterosexual women need to make the first move (like Bumble), and even ones for beard-lovers (like Bristlr), to name a few — and such is the case when it comes to group social outings, too.

Some only give you a limited amount of time, like 24 hours, to make plans while others coordinate the date for you — all you need to do is show up. Simple enough, huh? And others even include your first round of drinks. Sign. Me. Up.

Here are some social/group dating apps you need to try — so you can no longer make excuses that there’s no one around to go out with.

Now, you can go on group dates and outings via Tinder Social. Looking for a fun night out? Just create a group (which looks a lot like a group text) and an activity to do, like hitting up that new bar in Midtown. Even though you can only be in one group at a time, it’s NBD — your group expires at noon the next day anyway.

It’s perfect for making last-minute plans tonight. Plus, you can go back and forth in your settings between being on Tinder solely to date, one-on-one, and Tinder Social. Or, if you’re like me and are already coupled up, you and your bae can go on Tinder just for the social aspect.

With Squad, you pick up to five Facebook friends to be part of your “squad,” which you can switch up anytime. Plus, you can also have multiple squads. You create a group name and tagline, the latter meaning your goal — going to such-and-such bar tonight or a Mets game this weekend. Then, check out other squads and let the swiping left or right begin. Once you match with another squad, you have 24 hours to message and make plans. Oh, and instead of a bio, you describe yourself via three emojis (and you can still write a bio if you so choose) — which is awesome and so 2016.

With Grouper, you anonymously pick out friends-of-friends to meet IRL. If you mutually match, the app plans a “Grouper” for you — drinks between their friends and your friends. Plus, there is no messaging when you use Grouper. None! The app does all the work for you: time, place, and coordinating with everyone involved. The best part? It’s about friends meeting up with friends. “Dating” does not even have to be part of it, though if you do find you have a love connection with a friend-of-a-friend, it’s pretty great (like having a letter of recommendation, of sorts).

Let’s say you and a couple friends want to meet some new people IRL. Just log onto CLIQ and then you can match with another group of friends. First, you’ll choose some topics you’re interested in. Then, the app will take it from there and send you “Goodies” based on your interests and suggest places for you to check out. Via “Huddle,” you can also chat with members of your CLIQ privately. With the app, CLIQs can also choose not to be private and post status updates, pics, videos, and location posts, so followers can see what you have going on and where.

First, choose one or two friends and start a group with them. Then, the app suggests nearby groups to you and you can “like” or “pass.” When you and another group match, you can start up a group chat. Then, let the planning-to-meet-IRL begin. The only downside? Currently, Entourage is only available in New York City, Los Angeles, Chicago, and San Francisco, but let’s be optimistic that it’ll expand to more cities soon enough.

Cheers, formerly known as Who’s That, is a social app that connects you to people at over 30 Boston-area bars. The company recently rebranded and also formed a partnership with Absolut Elyx, Absolut’s new luxury vodka — and continues to have a partnership with Fireball Whiskey, as well. With the app, you create a group with friends and swipe through other groups going out in your city. When you see people you want to get drinks with, tap “Cheers.” Like other swiping apps, you get a match when there’s mutual interest. Then, “Pick a Place” in the conversation to meet for drinks. Your concierge will make a reservation and you’ll get the first round of drinks free. Yep, free. So easy. (Though I hope it expands to other cities, too.)