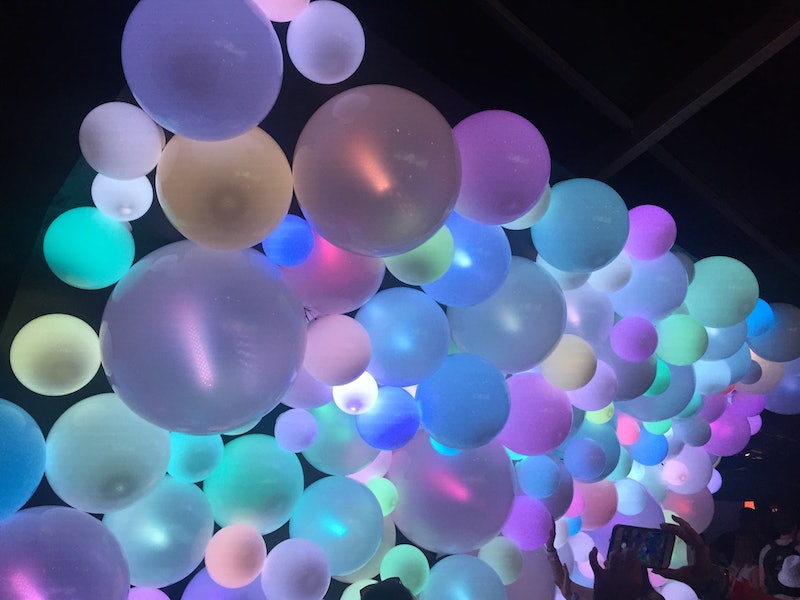 New York's got two major outdoor music festivals on its hands now. With the introduction of Panorama, a festival held at the same venue as New York's beloved Governor's Ball (with a few slight adjustments to the space), New York now has two musical bookends on its summer of fun. But unlike Governor's Ball, where the vibe is decidedly more messy and down in the dirt, Panorama is like the original fest's gentrifying neighbor moving into a crowded Williamsburg walk-up. The design is mind-bogglingly minimalist and meticulous. The vibes are a bit calmer. And the entire experience is punctuated by an underlying theme that makes it about more than shouting your favorite band's lyrics back at them while ankle deep in mud. Aside from the music, Panorama Festival had a focus on art and technology.

At the Panorama site, there is an indoor, tented section they called The Lab. It's sponsored by HP, so everything every installation in the space has to use some form of HP technology, but the line outside, which stretched on for nearly 40 minutes, betrayed something much cooler than some obvious marketing ploy. The inside of the dome which comprised The Lab felt like an on-site modern art museum.

Some of the installations inside seemed a bit too on the nose for drunk, sweaty festival goers to appreciate. I watched as legions of young women piled into a glorified bounce house that resembled silly string suspended in animation. This, it seems, provided the perfect Boomerang opportunity for Instagram. Another wall called "Reflection Study" (above) again seemed to provide the perfect social media backdrop. And there was a wall of illuminated balloons (top image) set up with computers built for this express purpose — actual selfie stations, which, if I hadn't been there a professional observer, I definitely would have taken advantage of.

More along the lines of what I was hoping for in a space that was so hyped, was something called The Hyper Thread (below), pitched as a sonic home away from home when festival goers needed a break from the non-stop sound outside. The installation was a silk tent with a handful of silk pods hanging from the ceiling, and your movement within those pods was connected to the music playing in the experience. I have to say, it was the perfect reset button for the senses, and if wasn't considered rude to hang onto my seat for hours, I probably wouldn't have left for an embarrassingly long time.

The place felt like a playground for festival goers, not unlike some experiences at New York's Museum of Sex, and on occasion even certain exhibits at the MoMa that serve less as art and more as fodder for really cool Instagrams. But the pièce de résistance of the whole experience was, thankfully, one where social media had no bearing. While I tried to take images for the sake of good journalism, this was something that simply couldn't be captured (my sad attempt is below).

The dome was the final experience available in The Lab, and inside everyone lies down under the rotund screen to watch a short film with musical accompaniment that is also clearly sponsored by HP, but is so engrossing that it's easy to forget that by midway through the experience. Maybe it was the fact that this room had AC blasting from every corner, or the fact that as an over-25-year-old at a music festival, I'm always angling for a socially acceptable reason to lie down, but this made the 40-ish minutes waiting in a line in direct sunlight totally worth it.

It was a bit jarring to go from this art-infused experience back into the glaring sunlight and roaring noise of the festival, but I think that every festival could benefit from this sort of escape — a momentary sanctuary from the overwhelming elements so you can come out refreshed on the other side.