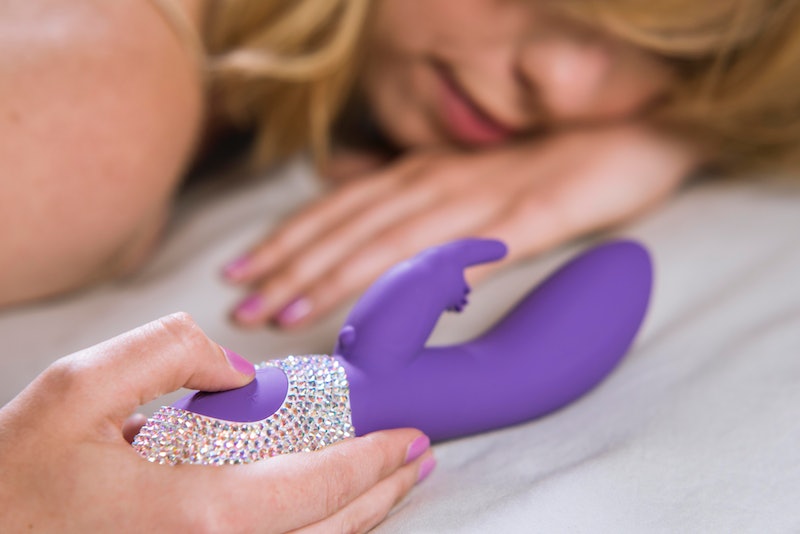 When we think about sex toys, we usually think about what we do with them after they're created. But there's a lot that they go through beforehand. From the formation of an idea to successful trials, many measures are taken to ensure a sex toy is high-quality enough to put in, on, or around your body. In fact, according to Steve Thomson, CMO for the sex toy company LELO, most sex toys that get designed and tested actually don't go to market.

With all the sex toys out there, you might expect companies to run out of ideas. But LELO's customers are always contacting them with new requests, Thomson tells Bustle. Before that, the company got most of its ideas from team members and their friends. Companies also often conduct research to try to figure out what's missing in the market. Alexandra Fine and Janet Lieberman, co-founders of the sex toy company Dame Products, have spoken to sex toy shop owners and even conducted surveys of users to figure out what people are looking for.

The version of a toy you see on shelves isn't usually the only one that was made. Companies will create prototypes with all different aspects of the design switched up, from the shape to the speed of the vibration. With products people more commonly talk about, like chairs and computer mice, there are studies on the best designs, Liz Klinger, co-founder CEO of Lioness, tells Bustle. But for vibrators, you kind of have to start from scratch and do your own research.

To figure out which iteration of the product works best, you have to test it on real people. For every product you see in a sex toy shop, several versions of it underwent beta testing before the right prototype was selected. How do you get to be one of these lucky testers? Usually either by knowing someone at the company or by responding to public call-outs. "We have an enthusiastic group of sex experts and testers who we turn to regularly for frank honest feedback, selected from our newsletter subscribers," Thomson says.

The sex toy industry is embarrassingly unregulated. Klinger says a lot of toys use chemicals that aren't even allowed in children's toys. However, certain brands establish their own standards for the materials they use. Lioness uses body-safe silicone, and LELO makes sure their products are certified by SGS and Intertek.

Once you've ensured that a sex toy can work and is safe, you need to think about the aesthetics, says Thomson. This can include factors like color, name, and packaging. Cost plays a big role in these considerations, since just adding a new color can be labor-intensive for a manufacturer, says Klinger.

Then, at last, the sex toys you know and love are created. Since this usually involves working with a manufacturer and producing products in large quantities, it requires different considerations than building a prototype, says Klinger.

Toys don't typically reach this step until they've gone through the previous ones several times. "Usually, you plan a couple of cycles into your schedule, since it's unlikely you would create the best version of the product your first time around," Fine and Lieberman tell Bustle.