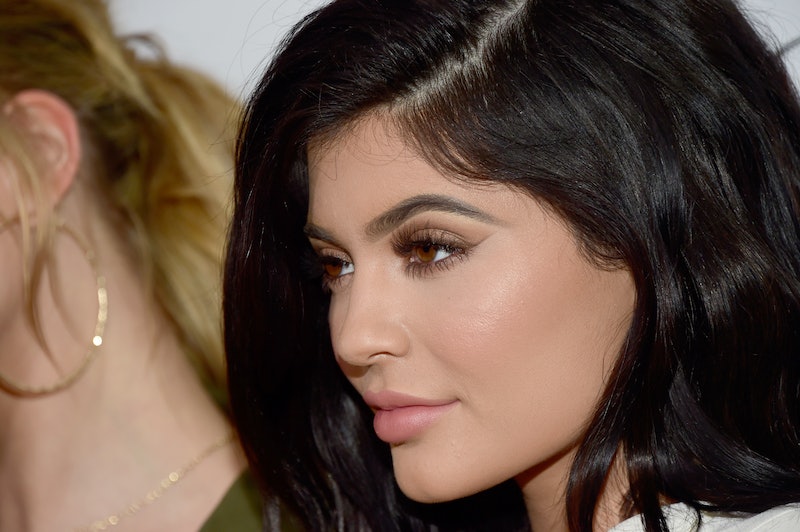 There has been plenty of speculation and hints dropped about Kylie Jenner expanding her Kylie Cosmetics empire beyond her best-selling matte Lip Kits, her super shiny Kylie Glosses, and her Metal Mattes. Well, Jenner confirmed that Kylie Cosmetics eye makeup is actually happening. Go ahead — freak out, shake your thang, do a happy dance, and then come back down to earth. Kylie's Kyshadow Palette is comprised of nine stunning bronze shades. I know, this reveal is almost too much good news to handle! When can you purchase Kylie Cosmetics eye makeup?

According to the Kylie Cosmetics Instagram account, the palette will be stocked at 3 p.m. PST on July 26. This is the first of three palettes, according to Kylie's video highlighting the product. I am already expecting the Kylie Cosmetics site, which is the brand's sole sales platform to date, to crash upon launch. I also expect crazy hype and mania leading up to the first on-sale date.

The cost of the palette is still a mystery. But you can assume that the price will be a little higher than her liquid lipsticks. You can also plan ahead and budget accordingly... because you know you need Kylie Cosmetics eye makeup haul. That's an absolute given.

It has certainly been a "summer of surprises" from Kylie Cosmetics, thanks to the blue Fourth of July shades, the four Lip Kit shades turned into glosses, and three brand new Lip Kit colors in the form of Ginger, Kristen, and Maliboo.

At first, Kylie Jenner teased a new addition to her product line by posting an image of a single eye with well-manicured brow, thick, curled, and voluminous lashes, and smudged liner along the upper lashline and lid. Fans were guessing about what was coming — some wondered if she was dropping an eye kit, false lashes, or Kyliner or Kyshadow or Kybrow products.

ICYMI: Jenner's first teaser post was black, white, and gray. It looked like an artsy pencil sketch. She confirmed all details via the Kylie Jenner site and app, which are accessible via paid subscriptions. See the stunning shot below.

It's here! The Bronze Kyshadow Palette. It's the first and it's full of universal, complimentary hues that will pair well with the new Lip Kit summer shades. In the Kyshadow Palette tutorial on Jenner's site, makeup artist Ariel Tejada applied all the shadows to Jenner's eyes. He described the product as buildable and blendable, with minimal fallout. Jenner also admitted she is super partic about her brown eyeshadows. These browns are so fab. Lookout, Olsen Twins. You are not the only masters of bronzed, smoky eyes.

While I love the KLKs and the Kylie Glosses, it was totally time for her to tackle a new facial feature. Her eye makeup is always banging and now fans and customers can copy it!

Jenner's eyes and her lips have long been her signatures. This profile shot, which was meant to show off her ear piercings, really calls attention to her pouty pucker and her dramatic lashes and lids. She also stated in the tutorial that she has been rocking the Bronze Kyshadow Eyeshadow Palette in all of her Snapchat videos and Instagram pics for the past five to six months! It was hiding in plain sight.

I am totally loving this Kylie Jenner Summer of Surprises! Oh, and her dogs are super cute, too.

More like this
10 Ways To Modernize The Early '00s Frosted Eyeshadow Look
By Olivia Rose Ferreiro
The Friends Of Glossier Summer Sale Is Back
By Tomi Otekunrin
What Are "Gym Lips" & Why Is BeautyTok So Obsessed With Them?
By Olivia Rose Ferreiro
19 Memorial Day Beauty Sales To Shop In 2022
By Audrey Noble
Get Even More From Bustle — Sign Up For The Newsletter