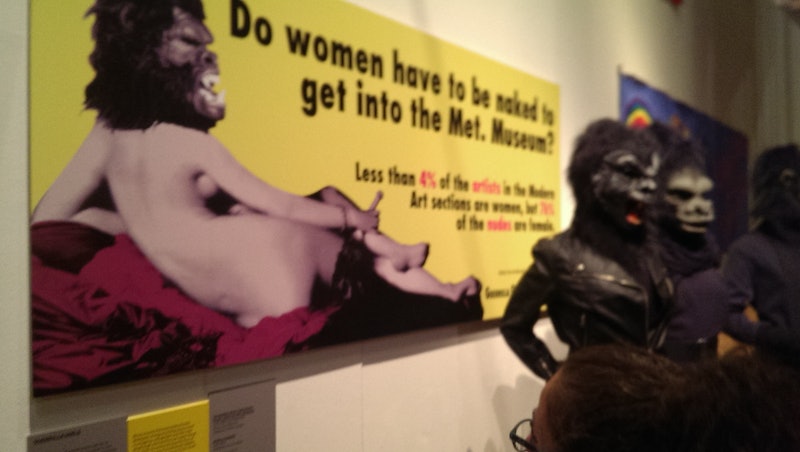 Anyone with an interest in feminism, art, or both has probably heard of the Guerrilla Girls, a feminist collective for art and activism to improve women's status in the art world. They've had many exhibits throughout the United States and Europe — and now, the Guerrilla Girls' first show in the UK will appear in Whitechapel Gallery in London from Oct. 1 to March 5. If this is the first you've heard of them, it's definitely worth learning more about the important insights and projects they've brought us.

The Guerrilla Girls are famous for wearing gorilla masks that conceal their identities in order to bring awareness to issues greater than themselves, shield themselves from backlash, and project humor. They go by the names of famous artists like Frida Kahlo and Georgia O'Keeffe during interviews. And as for the term "guerrilla," said "Georgia O'Keeffe" in a Q&A from a book written by the group, "We wanted to play with the fear of guerrilla warfare, to make people afraid of who we might be and where we would strike next."

The London exhibit, Is It Even Worse in Europe, will present research the Guerrilla Girls are conducting with 400 museum directors on gender and minority representation in the art world. “With this project, we wanted to pose the question, ‘Are museums today presenting a diverse history of contemporary art or the history of money and power?’" they said in a statement according to The Guardian.

This project should be especially important in bringing race into the equation, since the group has mostly focused on gender. Here are a few lessons to learn from the work they've done so far.

1. Women Are Seen More Often As Nudes Than As Artists

In perhaps their most famous campaign, the Guerrilla Girls counted the number of female nudes and female artists in the Metropolitan Museum of Art's public collections in Modern Art sections in 1989, and they found that five percent of the work was by female artists while 85 percent of the nudes were female. These facts expose both how women's perspectives are underrepresented in the art world and how art tends to cater to the male gaze.

In 1985, the Guerrilla Girls found 18 major commercial museums that exhibited 10 percent women artists or fewer. In 2014, they were fortunately able to change that number to 20 percent due to better representation of women, but there were still 18 museums on the list — many of the same ones.

The Guerrilla Girls also looked at how many solo shows at major museums were devoted to women in 1984 and 2014. During the early investigation, the Met, Whitney, and Guggenheim had no solo women's exhibitions whatsoever, and the MOMA had one. It wasn't much better the second time around: each museum had only gained one woman-centered exhibit over those 30 years.

4. People Perceive Art Differently Based On Who Made It

The Guerrilla Girls have been known for the posters they put in public places, and one is called "The Advantages of Being a Woman Artist." It sarcastically lists things like "being reassured that whatever kind of art you make it will be labeled feminine" and "not having to undergo the embarrassment of being called a genius." Through witty commentary like this, the group expresses frustration with the way women are viewed in the art world and challenges people to rethink their assumptions about artists, women, and people of other marginalized groups. Their work has evolved throughout the years, but this goal has been constant, and it'll be exciting to see how they accomplish it next.

More like this
How To See The Lunar Eclipse On May 15-16, 2022
By Kaitlyn Wylde
Sandra Bullock, Girlboss Extraordinaire
By Matt Harkins & Viviana Olen
Twitter Was Saying The Same Thing About Sam Ryder’s Surprising Eurovision Result
By El Hunt
The 'Hocus Pocus' Sequel Finally Has A Release Date & It Makes Total Sense
By Shannon Barbour and Radhika Menon
Get Even More From Bustle — Sign Up For The Newsletter