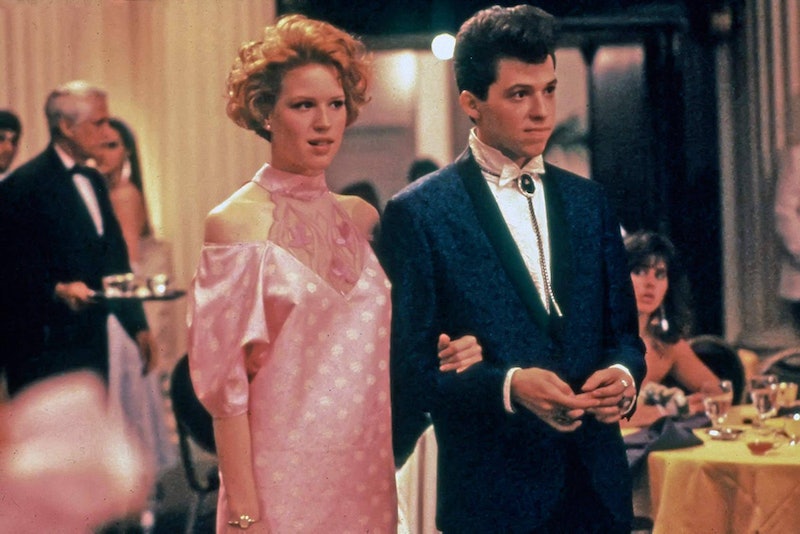 Despite the fact that I grew up long after the golden era of video tapes, I spent most of my formative years hoarding VHS's of teen movies featuring strong female leads from the ‘80s to the early '00s. Pre-Netflix, I’d rummage through bargain boxes purchasing anything that slightly resembled the teen experience, obsessed with watching as many outcast-focused movies starring strong women as possible.

These young women featured in films such as Heathers, Pretty In Pink, and The Breakfast Club were often offbeat teenagers. They weren't part of the high school cool crowd and they didn’t want to be. But more than anything, these heroines helped form a part of my aesthetic identity — teaching me how to embrace being an outcast myself.

First, let me get this out of the way. I am not about to wax lyrical about the makeover scenes that litter so many teen films. I cringed watching Ally Sheedy go from outcast weirdo to preppy princess at the end of The Breakfast Club in order to appease the jock. Brittany Murphy’s transformation from hapless stoner to full-blown preppy bitch produces an involuntary eye-roll every time I revisit Clueless. And Cady conforming with Regina George’s clique in Mean Girls — and becoming everything she hated along the way? That never made sense to me.

But for some reason, I managed to excuse the underlying misogyny and subconscious message that changing yourself in order to fit in with everyone else was the only way to climb the high school food chain, or bag the man of your dreams. My 15-year-old self was more than happy to forgive and forget these scenes. For every reductive makeover montage pushed upon a secondary character, I saw the fact that they never actually became any happier than they were when wearing ill-fitting plaid shirts or too much eyeliner. Instead, I focussed on the power the other heroines found in fashion, remembering the plot lines that showcased how their identity as women became defined by the clothes they wore and the outfits they constructed.

I’m not talking about those obsessed with clothes in the traditional sense, either. Sure, Cher’s digitized wardrobe in Clueless is still the stuff of dreams over 20 years on. But designer labels or long trips to the mall often failed to grab my attention, and definitely didn’t seem aspirational. Rather, I became fixated on how Winona Ryder’s character Veronica in Heathers subverted conventional ‘80s power-dressing in order to create separation between herself and the Heathers — a group of girls so vile they make Regina George’s scheming seem juvenile.

Veronica’s oversized shoulder pads in black patchwork, ra-ra skirts, monocle, and mourning attire spoke volumes about her apathy towards her friendship group in contrast to their brightly-colored two-pieces and perfectly blow-dried hair. Her attitude eventually even lead to her killing them off one by one and reclaiming the red bow worn by the queen bee.

Then there was Andie. While most folks I knew hated Andie’s cobbled-together prom dress at the end of Pretty In Pink, the awful ‘80s concoction taught me volumes about girl power. A teen from the wrong side of the tracks, Andie had always been ashamed of her otherness, but never her outfits.

Isolated by the excessive Wolf Of Wall Street-esque wealth of her high school peers, she constructed looks from thrift stores and sought inspiration not from magazines, but instead from her boss Iona at the local record store and Andie’s place of work. Iona herself was a chameleon — effortlessly switching things up scene to scene, utilizing every aesthetic from punk to ‘50s prom, and eventually retreating to the safe confines of ‘80s prep after falling in love with a businessman.

After being shunned at the last minute by her yuppy prom date, Andie decided to attend the event regardless. Creating a Frankenstein-like dress from Iona’s original ‘50s pastel pink puffball, she attended the dance with her platonic bestie Duckie, telling her father, “I just wanna let them know they didn’t break me.”

The now iconic line was and remains a true act of defiance, her outfit acting as a metaphorical middle finger to the boy who bailed on her. The scene itself was one of the first times I saw clothing used as a political force, her outfit representing her unashamed agenda to be herself regardless of the consequences and inevitable high school bullies.

Growing up obsessed with clothes, but never quite seeing the representation I sought in mainstream culture and fashion magazines, these characters taught my first and foremost that a healthy obsession with style does not equate to shallowness. Clothes can be a powerful weapon against toxic friendships, against the blandness of teen suburban existence, and even against the patriarchy. In the microcosm school communities we grow up within, our self-identity is often the only agency we have to use against normativity and hierarchy.

Whether it’s a gang of high school witches in The Craft, a hand-stitched prom dress, or even Cady’s ill-fitting pink Ralph Lauren polo in Mean Girls, weird girls on screen proved to me the power of being myself.

More like this
The 'Hocus Pocus' Sequel Finally Has A Release Date & It Makes Total Sense
By Shannon Barbour and Radhika Menon
Sandra Bullock, Girlboss Extraordinaire
By Matt Harkins & Viviana Olen
‘90s Streetwear Brands That Are Making A Major Comeback
By Dominique Norman
8 Creepy Things You Probably Did In The '90s
By Julie Sprankles
Get Even More From Bustle — Sign Up For The Newsletter