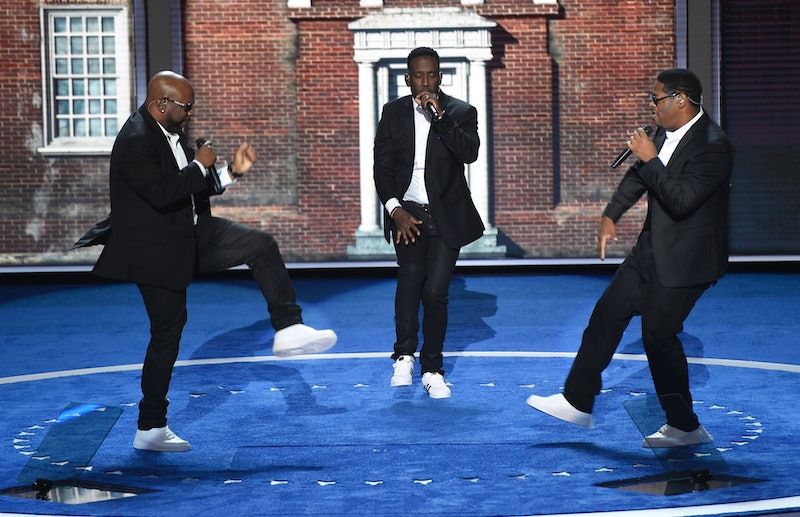 The Democratic National Convention was flashing back to the 1990s when Boyz II Men took the DNC stage to help kick off the four-day event on Monday. You might know them for their slow jams like "I'll Make Love To You" and "On Bended Knee," but the group sang "Motown Philly" to the crowd of Democrats to get things started off with a little more pep.

The DNC will be a much more star-studded affair than the RNC was, with Monday's schedule alone featuring not only Boyz II Men, but also Demi Lovato, Jason and Jarron Collins, Sarah Silverman, Paul Simon, and Eva Longoria.

Obviously, "Motown Philly" was a fitting song to start of the convention — which, in case you didn't know, is taking place in Philadelphia. Now, I don't know if the DNC attendees are lucky enough to have a "jet-black Benz, plenty of friends, and all the Philly steaks you can eat," but I have to say that'd make one hell of a convention.

If you're missing the glory days of the '90s and would love a little throwback to the classic music we all grew up on, the videos of Boyz II Men performing are an absolute must-watch.

I'm hoping it's not blasphemy to say that I'm more of a K-Ci & JoJo kind of gal, but this blast to the past was a great way to start the DNC. Attendees, delegates, speakers, and likely Hillary Clinton herself are going to be in the groove for the rest of the week thanks to this.