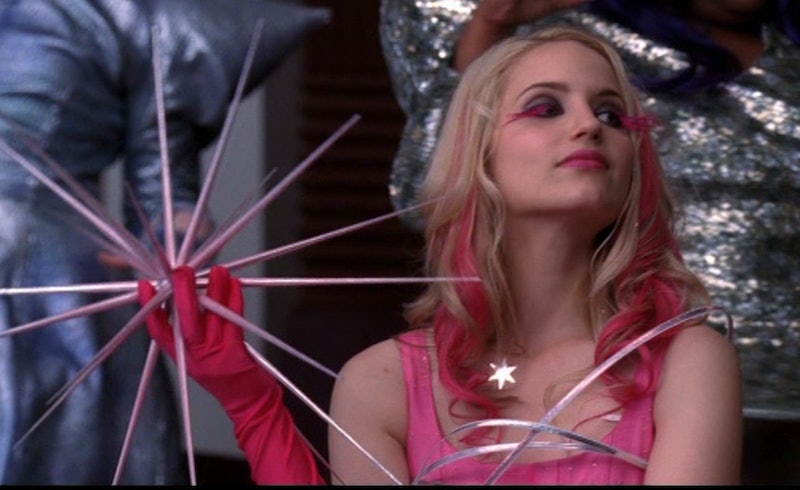 If I were a #science person, I could probably tell you some deeply informative things about our genes and or how certain strand of them directly correlates with our ability to feel shame. But alas, I am a theater person, and all I can say re: the shame gene is that we just plain don't have one. Theater kids are basically honey badgers — we don't give a f***. My official theory on this is that you're either born shameless and gravitate to theater, or gravitate to theater and immediately have your shame gene clicked off my osmosis (which is a science term I remember from a science class I took one time when I was waiting for rehearsal to start).

Really, this phenomenon is nothing more than adaptation necessary to theater survival. Between getting half-naked backstage during quick changes in full view of the cast, sporting pit stains on your costume the size of small empires, and pretty much committing all seven mortal sins within 30 minutes when you're actually onstage, if you took the time to apologize for the awkwardness, you'd be dead before you finished. So yeah, we let the freak flags fly, and we fly 'em proud. Here are all the things theater kids will never apologize for:

Texting You Long Series Of Lin-Manuel Miranda Tweet Screenshots At 2 A.M. With No Context

He is a precious perfect human angel and this internet does not deserve his pure pure pure soul.

If you don't embarrass an old friend by commenting "#Never4get" on a cast photo from a 2006 production of Seussical, why even bother having an internet?

LISTEN, it's gotta catch 'em all, not gotta turn off your phone out of respect for whoever is dying a dramatic death onstage. Geez.

And then communicating solely in emoji for the #thrill of it all.

And, Alternatively, Warming Up Right Next To Your Face

Were there plenty of other places we could have done this? Sure. But we chose you, Pikachu.

Getting Schwasted At The Cast Party

... and showing up astoundingly hungover for Strike.

During the hell of Tech Week, this is the drug that keeps us from dying.

Accidentally Being In A Showmance

Oh my gosh, yes, we should order tater tots. Speaking of tater tots, have you accepted our divine neurotic mess Alexander Hamilton as your lord and savior?

*casually peels off the masking tape with your name on it*

All's fair in theater and war.

Peeing While Our Microphones Are Still Switched On

To be fair, this is almost always someone else's fault. But we theater kids refuse to be bladder-shamed. Enjoy the sweet, sweet sound of random trickling pee during the Act One finale, audience members, because most people have to pay a heck of a lot more for that show.

Canceling Plans With Our #Normal Friends Because Of Rehearsal ... Again

OK, maybe we will apologize on the outside. (But on the inside we are not sorry, not even a little.)

To be fair, when there are free donuts in the office kitchen, I do, by the very definition of "move," do it well. So technically this is not a lie.

Oh, perfect. Time to catch up on all that ... stuff I had to do in my parked car. In the 90 degree heat. On a Wednesday night.

Staking Out Our Own Sad Corner Backstage

The Sacred Corner where you will spend the next two to six weeks intermittently getting half-naked between scenes, eating grocery store sushi with your fingers, and accumulating approximately 20 pounds of garbage. Home, sweet home.

Adulthood crushed the joy and wonder out of everything else, but not this, Satan. NEVER THIS.