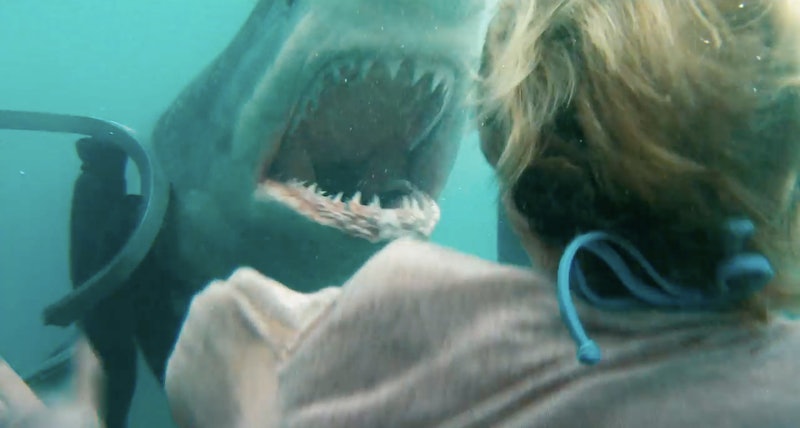 Sharknado: The 4th Awakens is almost upon us — yes, Syfy most definitely did make a fourth installment in this particular B-movie franchise and, yes, I will be tuning in to live-tweet the heck out of it — which means Syfy has had a whole week of shark attack-related programming geared up for fans. One particular addition to the lineup is 2011 horror movie Shark Night. But I have to wonder: Is Shark Night a true story? From what I can tell, Shark Night isn't based on a real event, but it does take some inspiration from real life.

First off, let's recap exactly what Shark Night is all about. In typical horror movie fashion, the film starts off with a group of rambunctious college students heading out to one girl, Sara's, family vacation home that sits on the edge of a private lake. But, since this is a horror movie, it isn't long before the titular sharks come calling — yes, even though they're on a lake — terrorizing the teenagers and picking our heroes off one by one. It's later revealed that the sharks were put into the lake on purpose and those who filled a saltwater lake with sharks were inspired by Discovery's Shark Week. But, other than Shark Week, does Shark Night have any real-life inspiration?

Thankfully, from what I could tell researching fatal shark attacks, there hasn't been a single one in a lake. Most fatal shark attacks occur in the ocean, though there was a story of a boy attacked by a shark in Lake Pontchartrain in 2014 as reported by USA Today. Plus, a bull shark was caught in the same lake earlier in 2016 according to WGNO. Fun fact: Bull sharks can be found in lakes because they're able to survive in both fresh and saltwater, according to Shark Savers; in addition to Lake Pontchartrain, bull sharks have been seen in the Mississippi River, the Illinois River, and Lake Michigan.

Still, there's no particular incident on which Shark Night is based. Given the premise of the movie has no basis in a real-life event — and the villain's explicit revelation that he got the idea from watching Shark Week — it seems likely Shark Night is more about taking the massive popularity of Discovery's shark-filled week of programming and exaggerating it to the point of horror. While that might create a terrifying creature feature for our enjoyment, we can at least find relief that there is a very, very, very low chance of a shark attack happening in a lake.

More like this
Michael & Kathleen Peterson’s House From ‘The Staircase’ Has New Owners
By Kadin Burnett and Kayla Blanton
What Does Doctor Strange’s Third Eye Mean?
By Arya Roshanian
What’s New On Netflix: A Victoria Justice Rom-Com & The Return Of David Letterman
By Arya Roshanian
Lisa Marie Presley Reviewed Baz Luhrmann’s ‘Elvis’ Movie On Twitter
By Grace Wehniainen
Get Even More From Bustle — Sign Up For The Newsletter