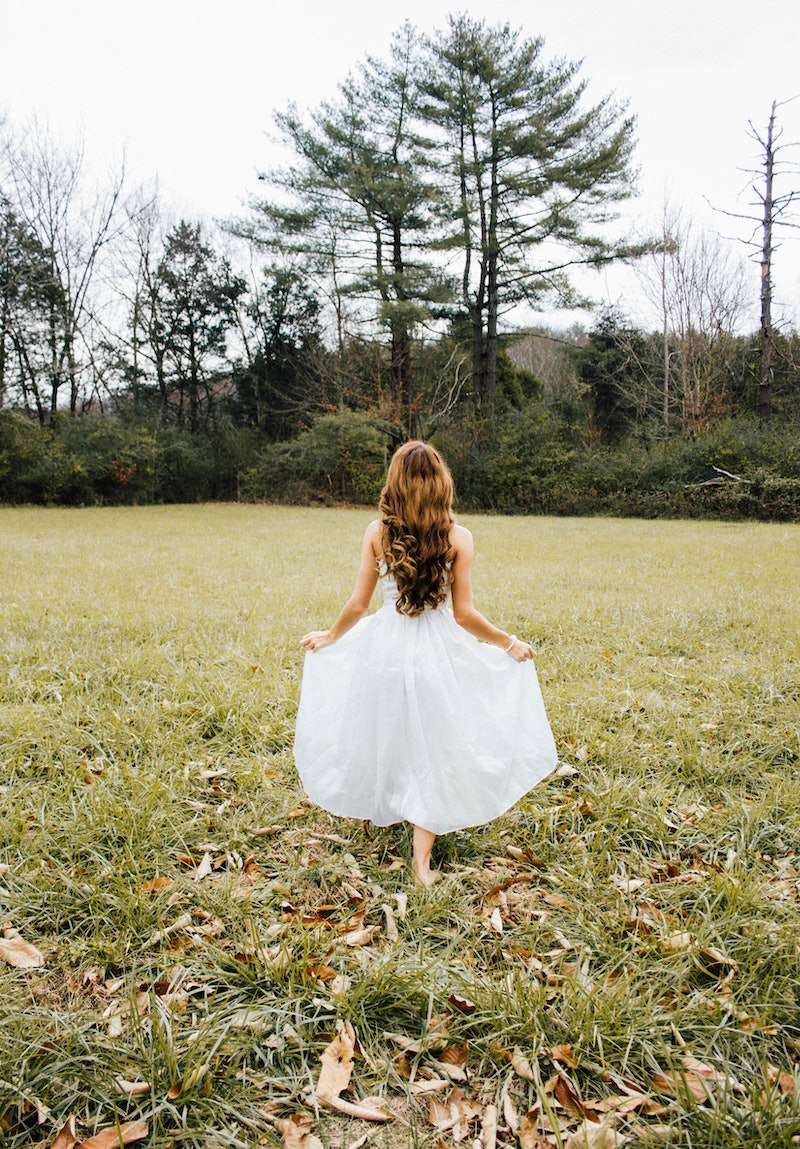 There are a lot of wedding “traditions” that my partner and I have decided not to worry about when we get married this fall: Throwing a giant dance party reception, having the perfect signature cocktail, which rustic chic centerpiece lantern speaks deeply to our inner souls, what the heck a unity candle is, and so on and so forth. That said, though, there are still a couple of standard considerations we are thinking about, one of which is the whole name situation. The fact that I ultimately decided I’m not changing my name when I get married isn’t exactly surprising; the woman in a heterosexual marriage changing her name is a patriarchal tradition, and as a loud and proud feminist… well, let’s just say the idea doesn’t really do it for me. Furthermore, I’m in my 30s and have already established a career under my own name, so changing it now would be complicated — needlessly so, I'd argue — from a professional standpoint. But if I’m really honest with myself, there’s one primary reason I’m not changing my name, and it isn’t necessarily based in my feminist beliefs. That reason is this:

It’s a pain in the butt, and I don’t want to have to deal with it.

What I found while searching the pros and cons pretty much amounted to stuff I already knew: If you already have a well-established career under your original name, keeping it might make sense; however, having a different name than your husband or kids can sometimes cause issues in situations that require you to prove you’re actually either a spouse or a parent (hospital visits, for example, or traveling — it might make you feel like you have to cart your marriage certificate around with you at all times); but, it’s not usually a problem, so you likely won’t have to worry about it (although sometimes, you might, as Pamela Paul’s 2013 New York Times piece “The Problem That Has Two Names” reminds us); sure, you can always use one name legally and another professionally (but it might get confusing about when to use one versus the other); and so on and so forth. On this level, it all comes down to how you feel personally about all these things — for example, some people might not mind the possible headaches that having a different name than your spouse or kids might cause, while it might be the worst case scenario for others.

When I started looking into exactly what I’d need to do if I decided to change my name, though? Hoo boy. For one thing, the process varies from state to state, which makes it incredibly easy to dig up information that isn’t necessarily relevant for you (and get super confused while you’re at it); and second, no matter where you are, there’s just so much that goes into it. I mean, first, you have to get a new Social Security card; then you have to change your driver’s license or state-issued ID; you also have to do all your credit cards and banking information; you have to change your passport if you have one; you have to inform places like doctor’s offices where important information might be filed under your old name; you have to register the change with the United States Postal Service; you have to change your voter registration; you have to deal with your insurance company; and on, and on, and on. Here is a list of all the things you can expect to do when you change your name. Go on; read it. I’ll wait. And I will be here to commiserate with you about how intimidating it all sounds when you get back.

And to add another layer to the process, in our modern, plugged-in world, you also have to manage your digital footprint — something which is doubly important for me personally, as I literally make a living on the internet: If you change your email address to reflect your new name, you have to inform everyone who might try to contact you; oh, and while you’re at it, don’t forget to set up forwarding from your old address if you want to make sure you don’t miss anything; if your job involves having lots of clients and contacts, you’ll also have to notify them all about your name change and updated contact info; if you have social media handles, you have to change those as well — knowing full well that if you do, it’s bound to be confusing for followers who used to know you under one name and may not be aware that you’ve gotten married; if you have a website domain that prominently features your old name, you’ve got to figure out what you want to do about that, too....

... It's exhausting. And it’s why I don’t want to hyphenate my name or come up with a portmanteau or blended name, either; regardless of what you’re changing your name to, whether it’s your spouse’s or a new one entirely, the whole thing is such a giant headache that I simply don’t want to do it. It’s complicated; it’s stressful; and to my mind, it’s unnecessary.

Of course, though, when I stop to think about it (or at least, when I stop to think about it even more than I already have), even my “It’s annoying and I don’t want to deal with it” reasoning still has feminist undertones. After all, the cultural expectation for heterosexual marriages is that, if anyone is changing their name, it’ll be the woman, not the man — which means it’s also the cultural expectation that women should be the ones to jump through all those proverbial hoops, while men can just keep on doing what they’ve always been doing. And honestly? I think that’s bullsh*t. And it’s especially bullsh*t when you look back on the actual history of married names and realize exactly what you’re being expected to do that hoop-jumping for.

In the United States, the “tradition” of a woman changing her name upon marriage stems from coverture laws that originated in England. These laws are part of what we’re referring to when we say that women back in the day had no rights; they were basically treated as property, with a marriage being more of a business transaction between the bride’s father and her new husband than anything else. Wrote Sir William Blackstone in the 1765 legal text Commentaries on the Laws of England :

By marriage, the husband and wife are one person in law: that is, the very being or legal existence of the woman is suspended during the marriage, or at least incorporated and consolidated into that of the husband: under whose wing, protection, and cover, she performs every thing; and is therefore called … a feme covert.

Read that sentence one more time: “The very being or legal existence of the woman is suspended during the marriage.” It states that married women literally don’t exist, legally speaking. To which my immediate reaction is something like this:

In an article published on the National Women’s History Museum’s website, Catherine Allgor, Ph.D. further describes from a practical standpoint what legally not existing meant at the time:

Coverture held that no female person had a legal identity. At birth, a female baby was covered by her father’s identity, and then, when she married, by her husband’s. The husband and wife became one — and that one was the husband. As a symbol of this subsuming of identity, women took the last names of their husbands. They were “feme coverts,” covered women.

Allgor goes on to explain that because they didn’t exist, married women couldn’t make contracts or be sued, which also meant that they couldn’t work or own a business; they couldn’t own anything, whether it was the property they lived on or the hairpins they kept their magnificently coiffed ‘dos in place with (it all belonged to their husbands); they had no parental rights, so if their husbands either left or divorced them, they would have no access to their kids ever again; and they had no bodily autonomy, which meant it was totally OK for their husbands to do whatever they wanted with them — whether that was spousal abuse, spousal rape, or anything else.

Find me a person today who’s OK with all that, and I would be willing to consider the possibility that unicorns are real. That’s how certain I am that person doesn’t exist.

While I’ve been able to divorce some wedding traditions from their problematic origins — having my dad walk me down the aisle, for example, still holds a lot of meaning for me that’s completely unrelated to the history of the tradition — I haven’t been able to do so with others. The first dance and father-daughter dance fall into the category of “Things I Feel Kind Of Icky About,” as does changing my name. Unlike the dancing traditions, though, the name change thing isn’t problematic to me solely in terms of its history; it’s compounded by the fact that it requires me to deal with all the complications that arise from changing your name, because of that history. That’s like making someone compete in the Hunger Games for the prize of continuing to uphold a dystopian, totalitarian regime. (OK, so maybe it’s not that dramatic, but you get what I mean — in both cases, you have to perform a complicated task, with your reward for doing so being the perpetuation of an oppressive set of rules. Not so good.)

None of this is to say, of course, that you can’t be a feminist and change your name; indeed, name changing can definitely be a feminist act, depending on how you approach it. Nor is it to say that any one of the many, many options we have for approaching the name situation is any better than the others. The question is always about what’s right for you — and you’re the only person who has the power to decide what the answer to that question is. For me personally? I just can’t get behind the idea of changing my name. I’ve been saying this a lot as I’ve taken deep dives into wedding traditions and the wedding industrial complex while planning my own nuptials, but what it all comes down to is, you do you. Not changing my name is me doing me.

Where’s my partner in all this, you ask? He’s also uninterested in changing his name (totally fair — he doesn’t want to have to deal with the paperwork, either), but he’s totally down for whatever I choose to do in terms of mine. If we have kids, we have plenty of options that will help connect us to them as their parents, from hyphenating their last names to using one of our own surnames as their middles. And as for the rest of the potential hurdles? We’ll cross those proverbial bridges if or when we get to them.