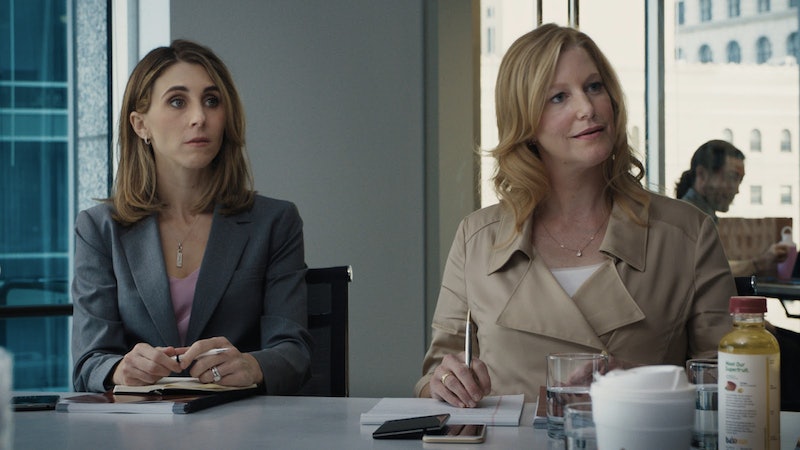 In many industries, finding an equal number of women in the workplace isn't always a guarantee, and the financial sector is no exception. As Meera Menon's new film Equity points out, women are scarce in the financial world, and those that do work there don't always have each other's backs. In theaters now, Equity tells the story of Naomi Bishop, played by Anna Gunn of Breaking Bad , a fierce investment banker working on Wall Street, with Sarah Megan Thomas as Naomi's ambitious VP, Erin, and Alysia Reiner as a federal agent investigating some of Naomi's business deals. The movie's set up of these three women's constant battles may feel unnecessary; shouldn't women be supporting of other women, not pitting themselves against each other? But as Wall Street veteran Sallie Krawcheck, who consulted on the movie, tells Bustle, there's definite truth in Equity's depiction of the way women in finance can turn against one another.

"I’ve been on Wall St. in one form or another since the late '80s, and almost no woman who you speak to who's been in the industry that long doesn’t have some sort of experience of another woman knocking her legs out from under her," Krawcheck says. She's the CEO of Ellevate, a global networking organization for women, and Co-Founder of Ellevest, a digital investing platform for women, but she spent years on Wall Street as Chair and CEO of Sanford C. Bernstein & Company, CEO and Chair for Citi Global Wealth Management where she was responsible for Smith Barney, the Citi Private Bank, and Citi Investment Research, and CEO of Merrill Lynch Wealth Management. Clearly, she knows a thing or two about how the finance world trends to be — especially when it comes to the treatment of women.

"I believe it is better than it used to be," Krawcheck says about the competition between women working in finance. "But when there are very few women, especially in senior roles in an organization, it’s not unusual for there to be a sense of scarcity, and a sense of if one wins the other loses." In this sense, Krawcheck says, Equity "definitely had a feeling of familiarity to it."

The men who advocate for women have their professional reputations enhanced. But [there are] women who do get, 'Well she’s just doing that because she’s a woman.'

Consulting on the movie, Krawcheck shared her experiences in the financial sector with the filmmakers. She says now that Equity "certainly did a good job of capturing the mood of the place," but adds that there are some ways the movie differs from her reality. Unlike Erin, who has Naomi to look up to even when she's moving behind her back, Krawcheck says she didn't have a single female mentor to look up to or guide her along her career path. "It’s not as bad as you think and it’s worse than you think," she says, "Because pretty quickly I was the senior female. I turned around at the age of 24 or 25 and was the senior woman in my department. Crazy. I had a lot of amazing male mentors, but that kind of support I just didn’t have."

Krawcheck's sense of the lack of women around her wasn't just her impression, but the truth. According to Bloomberg, as of 2012, "women make up only 17% to 23% of all employees" in the finance industry, and CNN/Money noted that as of 2015, “only 14.2% of the top five leadership positions” were held by women. That scarcity can lead to more competition, and create an environment that can be less than supportive, Krawcheck says, as happens in Equity. "We talk about the Queen Bee syndrome, we talk about women being pitted against women," she explains. "There is research that indicates that, historically, women who have advocated for other women have been dinged for it. The men who advocate for women have their professional reputations enhanced. But [there are] women who do get, 'Well she’s just doing that because she’s a woman.'"

Thankfully, Krawcheck sees the environment changing. "What I really like that’s going on now that I think is important is that women are just throwing this off. Sheryl Sandberg knew that she’d take hits about Lean In and she did it anyway. Andrea Young, who was at Avon, is now at a company that makes loans to other women. What you’re starting to see is that despite the old research and despite the old way it was, women are starting to say forget it, I’m not buying this anymore. I’m not going to fall into the way it was."

But getting to this point took a lot of slogging through the mud. Krawcheck says she dealt with sexism and workplace harassment from men for years. "In 1987, every day that I went into my office there was a xeroxed copy of a male body part on my desk," she realls. "And not one that saw the sun. So that was pretty terrible." She guesses the men who did it were either threatened by her presence or simply immature, caving to their own peer pressures. "There’s a pack mentality and people do things in that environment that they wouldn’t do in front of their mother. But my reaction was, 'There’s no way you’re running me out of here, it’s not going to happen.'" And that's the only reaction she could have, she says. "You could not do anything. You had to brush it off. If you had a reaction it was 100 times worse. It was bullying. How do you handle a bully?"

Do you prefer photos of male [genitalia] on your desk or do you prefer being fired because you’re different from everyone else out there?

But the sexism also came in more subtle ways, Krawcheck says. She was officially fired from Citi for returning clients funds, but she wonders if it had more to do with gender discrimination. "While on the face of it, that has nothing to do with gender," she says, but "now that time has passed, and the emotion is out of it and you dig deeper, you start to [think], was it a coincidence that I was female and did this? ... was I was fired because I was different? Yes. Was part of being different being female? Yes. I don’t know which is worse. Do you prefer photos of male [genitalia] on your desk or do you prefer being fired because you’re different from everyone else out there?"

But overall, Krawcheck looks back on her time on Wall Street with fondness. "I want to be clear, 99% of the time it was amazing," she says. "I loved my time on Wall Street. I wouldn’t have stayed that long if I hadn’t." Now, though, her main goal is to encourage, support, and inform other women, so along with consulting on films like Equity, she's devoting her work life to Ellevate, where she offers up advice to young women. "Networking is the number one unwritten rule in business," she says, "but no one tells [women] this. Guys somehow get it. Women, it tends to take us a little longer." She uses the examples of the deals made in Equity as proof. "How do you get a deal? It’s through connections. How do you get a position? It’s through connections. How do you get the next job? Connections. Your next business opportunity is likely to come from a loose connection than a close connection. So the more women we can have making those connections, the more successful they can be."

Yet often, women don't get this right off the bat, a fact Krawcheck attributes to the finance world not being set up for women. "The industry is so male, it tends to do a better job for males than females," she says. "The whole idea of networking is sort of infused with go to the bar, go play golf, glad handle, back slap. I can’t even tell you the number of women who say, I don’t want to do it based on my 'connections.'" But Krawcheck notes that not a single one of her positions throughout her career didn't come from a connection.

But it's not just networking that makes a difference. In order to succeed, Krawcheck says, women need to do something that may seem scary, out of their league, or complicated: invest their money. "Men tend to invest more than women. We talk so much in this country about the gender pay gap, and how much it costs women. There’s also a gender investing gap and it costs women even more," she says. "If you turn on CNBC, there’s war analogies, there are sports analogies, outperform, beat the market, pick a winner, it’s male. The symbol of the industry is a bull, it’s a phallic symbol. On the one hand we have women not investing; on the other hand we have a very male business. 85% of financial advisers are male. You cannot convince me that those things are unrelated."

Which is why she began Ellevest, a platform meant to try and change the way women invest, and why movies like Equity are crucial. "The film is important because of how it depicts professional women and Wall Street women," Krawcheck says. "It’s drawing attention to this issue that’s hurting women. It's tremendously important." Watching badass ladies on screen is inspiring, but as Krawcheck proves, seeing their success in real life is even more so.

More like this
Black Women's Equal Pay Day Highlights An Upsetting Problem
By Brandi Neal
'Survivor' Host Jeff Probst's Salary Per Season After 22 Years Is The Real Winner
By Hugh McIntyre
Where Is Former Bachelor Host Chris Harrison Now & What Is His Net Worth?
By Hugh McIntyre
UK Viewers Will Have To Wait To Watch The Handmaid’s Tale S5
By Maxine Harrison
Get Even More From Bustle — Sign Up For The Newsletter