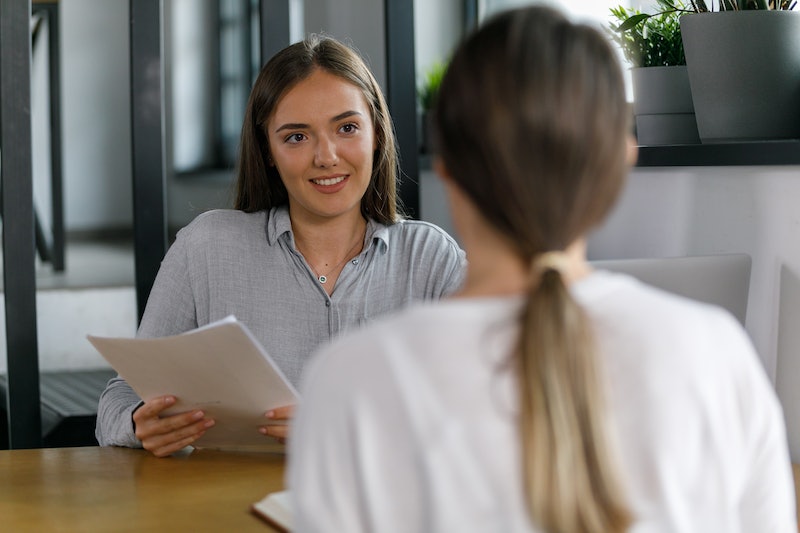 Since study after study has been coming out lately about the prevalence of sexism in the workplace, I put out a call to see if everyday women had stories of facing this form of discrimination — and, boy, did they ever. A survey I circulated on social media quickly filled up with responses; one woman even kept me on the phone for half an hour to share all her horrifying stories from the construction sites where she worked as an environmental consultant. Workplace sexism is alive and well indeed, and there are many, many real women with real stories behind all the statistics.

Speaking of statistics, the evidence that workplace sexism has reached epidemic proportions throughout the United States and many other countries is not merely anecdotal. Deloitte's annual Millennial Survey found this year that half of women feel they're being overlooked for leadership positions; meanwhile, according to the Elephant In The Valley survey, 84 percent of women in the tech industry have been called too aggressive at work, and 60 percent have been sexually harassed by a coworker. Another survey by Cosmo found that across industries, one in three women has experienced workplace harassment.

These numbers are disturbing, but equally disturbing are the stories behind them. Here are some harrowing but real accounts of the misogyny women have run up against at work.

"Normally, if I was at a construction site, I would wear sturdy jeans and be totally covered, but one day, I just had to pick something up from the office trailer and didn't have to worry about getting messy, so I wore black jeans and a shirt with a very loose cut — it had a deep v-neck but didn't expose any cleavage, and it was shaped in a way that implied that I had a feminine body, but I would not call it sexy. I was working on something in the office trailer, and the construction manager in charge of the project said to me, 'You can't wear that here. You shouldn't be wearing that here.' And I said, 'Yes, I should because it's what I wore, so if I chose it to wear, then I should be wearing it, and what I wear has nothing to do with my job, so I should be wearing it because I'm good at my job and it doesn't affect it.' And there was another female inspector in the office trailer at that time and she said, 'Damn straight, you sexist pig.' He was dumbfounded."

"After sitting on an interview panel, I heard my 62-year-old female boss and her 70-year-old male boss call the various female candidates the following things: A 'femme fatale,' someone who 'smiled too much,' and 'cute, attractive, but didn't make much sense.'"

"My boss let me know he liked the spilt in my skirt. Believe me, it wasn't much of a slit since it was as part of a suit. I think it showed two to three inches above my knee when I sat down. To another woman in the office who was away for the weekend visiting her boyfriend in another state, he asked if she had gotten 'enough' over the weekend. After being begged to play in a co-ed office baseball team (they needed another 'girl'), I was not allowed to really play. I stood at second base, and the male shortstop made sure he played both positions, never giving me a chance to touch the ball and believing girls can't play baseball. A male co-worker found any excuse to find me in any tight space so he could 'brush' past me. I started my professional career in 1985. I was the token woman. All other women in the office were secretaries. Many of the men believed I was there only because they were forced to hire a woman. It took a long time to get most of them to recognize my intelligence and value."

"As the only female in my office, I feel like I work in a frat house. I am constantly the butt of jokes, which for the most part I can take but sometimes it goes much too far. One day at lunch, I told them it felt as if I was constantly ganged up on and I'm tired of it. My boss responded, 'Why are girls always so emotional?!' And the VP said, 'Isn't that every woman's dream, to be ganged up on?' I stormed out of the office, and ever since then, they've gone to the other extreme and treated me like I'm fragile. If they drop the 'f; word, they apologize profusely (and mockingly). It's just so insulting as a woman to have to deal with this kind of treatment at the office. You can't win."

"My boss made a joke that I might miss a flight to 'f*ck a hockey team' on a business trip in front of a client and a male colleague. I found a single crunchy/stiff sock on my boss's chair that I had to move, and my male colleagues informed me that it was a 'c*m sock.'"

"A male colleague texted me 'shut up' while we were on a conference call with a client. I sent it to his boss. Then he and his white male boss had me 'laid off.' I should have done something. It was so blatant and wrong. But ... the whole place [was] white 50-year-old men, so I just moved on."

"When I was an intern, a boss assigned all the celebrity gossip and fluff pieces to me and all the sports-related content to the male intern. I was in disbelief."

"I was moved from the department that I launched and built for three years because a new General Manager felt that 'young men' or 'young bucks' would be more energetic. By the way, the performance of the department dropped."

"When I asked my current male editor if I could expense the $100 submission fee for [an awards program honoring women journalists], his very first response was not, 'Oh, good idea! I hope you get the award!' but 'Could you imagine if there was an awards society for male writers only and the backlash?' I was tempted to reply, 'You mean, the entire history of journalism?'"

"In my last job as a waitress, my boss tried to control what me and my other female co-workers wore, and one time, he tried to kiss me. In my current job as a reporter for a local newspaper, a reader came into the newsroom and asked if I was the secretary and kept asking if there was someone else he could talk to."

"A coworker at the office described the breasts of a prominent woman in our field while a group of coworkers laughed."

"When I was 24, I worked for a publisher of 'sexy' art books. I had a cookie with my lunch and my boss remarked, 'You better be careful. The boss doesn't like fat girls.'"

"At one workplace, we compared salaries and across the board, the women made significantly less than the men in the same exact jobs. In some cases, the women even had more experience. It made me angry. And to this day, it makes me angry when people say, 'The wage gap doesn't really exist.' It does. I've lived it."

"I worked in a team comprised mostly of men. The boss used to invite all of my younger, white, male coworkers over to his house for poker night almost every week. They would have late nights, and my male coworkers would drag their butts in late, obviously hung over with no reprimands — except for the occasional friendly ribbing — from the boss. No women were invited until the boss's boss once asked me if I went to the poker nights. I said 'no' and was immediately invited by my boss to attend that night. The worst part about the whole thing was that I liked my boss, but he didn't seem to realize how inviting only young, white men discriminated against the rest of us. And it was clear that those very same men were the ones given opportunities that the rest of us weren't."