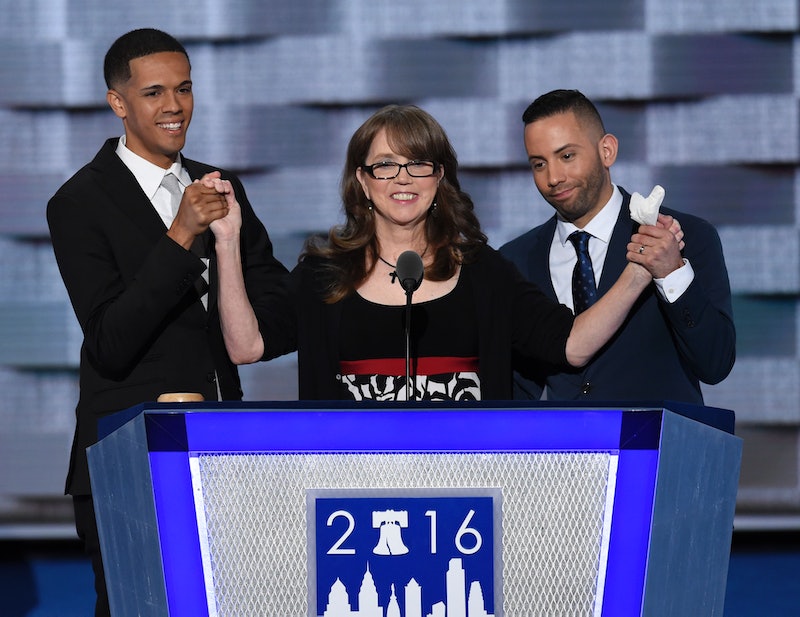 On Wednesday, the Democratic National Convention took an emotional turn when its focus shifted to an issue the country — and many mothers — have become all too familiar with: gun violence. One such mother took the stage in Philadelphia to support of Hillary Clinton, just over a month after her son was killed at the Pulse nightclub shooting in Orlando. Emotional throughout, Christine Leinonen's DNC speech included one quote that made a particularly emotional — and compelling — case for what the Democratic Party likes to call "common sense" gun reform.

Leinonen's son, Christopher, was her only child. She described him as "perfect," noting that he once won an award for starting his school's gay/straight alliance. Rather than focusing on the day he died — the day of the worst mass shooting in modern U.S. history — Leinonen told a story about the day her son was born. At the time, she was a state trooper. According to the anecdote, when she went into labor and rushed to the hospital, the hospital put her off-duty gun in a locked safe. She clearly — and very emotionally — wished that the same sort of "common sense" policies had been in place last month, too.

I'm glad common-sense gun policy was in place the day Christopher was born, but where was that common sense the day he died?

Leinonen's speech wasn't the only address to focus on a horrible act of gun violence. Wednesday's schedule also featured speeches from the daughter of a woman killed in the 2012 shooting at Sandy Hook Elementary School in Newtown, Connecticut. Former Rep. Gabrielle Giffords, who was shot in the head during an event in 2011, also spoke. The emotional plea for gun reform could not have been more clear — but it wasn't a one-sided conversation.

Leinonen spoke not just as the mother of a victim who fell to gun violence. She also spoke as a former law enforcement officer. After Leinonen, a former Philadelphia police commissioner, Charles Ramsey also spoke. He, too, called for a "common sense" approach to gun reform. It's a phrase that Democratic politicians have come to rely on in the wake of horrible tragedies like those in Orlando and Newtown — and it's a phrase that everyone in the DNC's audience clearly could get behind.

On Tuesday night, former President Bill Clinton called his wife a "change-maker." Gun violence isn't the only issue where speakers on Wednesday sought change, but it was definitely the most personal for Leinonen. As she reminded the audience, referencing the Orlando shooting victims, "It takes about five minutes for a church bell to ring 49 times."