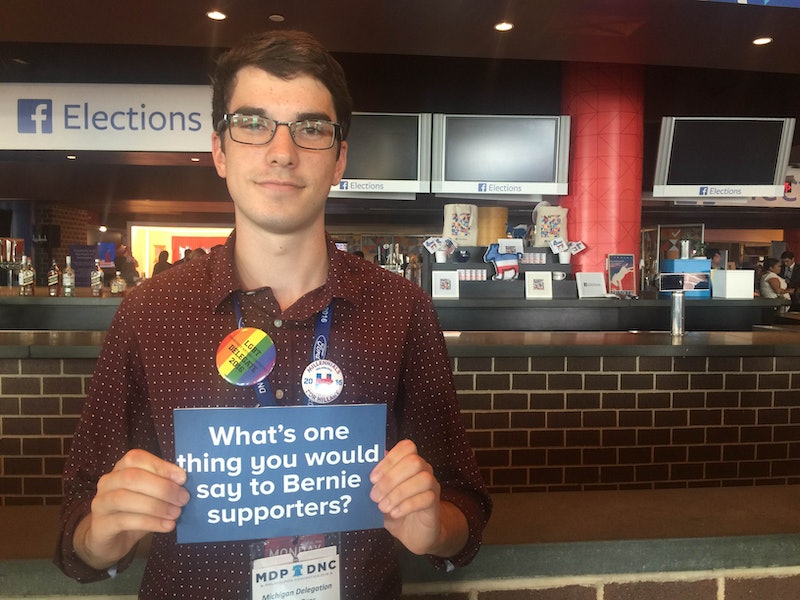 On Monday, Bernie Sanders asked that delegates make history by making his former primary rival, Hillary Clinton, the first female presidential nominee by a major political party in American history. Unwilling to give up on the Vermont senator, however, "Bernie or Bust" backers caused quite a stir at the Democratic National Convention this week, rendering party unity the committee's top priority. To get a feel for the resulting atmosphere, Bustle asked eight DNC attendees what they'd say to Sanders supporters if they had the chance.

According to Sanders, democracy thrives on the diversity of political ideals and beliefs in America. And though he wasn't made the Democratic Party's presidential nominee, his backers are putting pressure on the party to incorporate his progressive views into its official platform. Still, protests and walkouts at the DNC prove that his "revolution" might be hard to tame with moderate politics. Sanders confronted the situation without hesitation, reminding the audience that people are strongest when united.

It is no secret that Hillary Clinton and I disagree on a number of issues. That's what this campaign has been about. That's what democracy is about.

On Wednesday, efforts to quell the controversy peaked as former New York City Mayor Michael Bloomberg, an independent politician, related to pro-Sanders progressives and President Barack Obama made a noteworthy shout-out to the persistent group of political activists. "That's right, feel the Bern," he told audience members chanting "Bernie, Bernie." He asked that all Democratic voters remain as dedicated to Clinton and a united Democratic Party as Sanders' supporters did to the Vermont senator's "revolution." And he wasn't the only one to express sincere gratitude.

We heard from politically active college students, Clinton and Sanders supporters, and, of course, a woman in a wonderful Barack Obama printed dress. The majority of interviewees say they were thankful for the people who made Sanders campaign such a recognizable movement. If you'd like to watch videos of their responses, add Bustle on Snapchat at "bustledotcom." Here are their responses.

Hi, thank you Bernie supporters for just becoming involved in the political process and helping our party create one of the most progressive platforms in the history of our country.

Hillary's been a lifelong advocate for women and children, and I think that she'll go to work for you.

I'm national president of college democrats, and I just want to thank all Bernie supporters for all of the work that they did. And we're going to elect Hillary Clinton this November.

Thank you Sanders supporters for not only inspiring me, but inspiring a whole generation within in my friends, my family, and my community. You mean the world to us. Thank you.

I would say to my fellow supporters that it's imperative we come together and fight for progressive values. Our candidate might not have won, but our ideas will.

Hi, I would say get on board, because you don't want Trump...

Only one person wins the primary, and then we support the winner. That's how politics are.