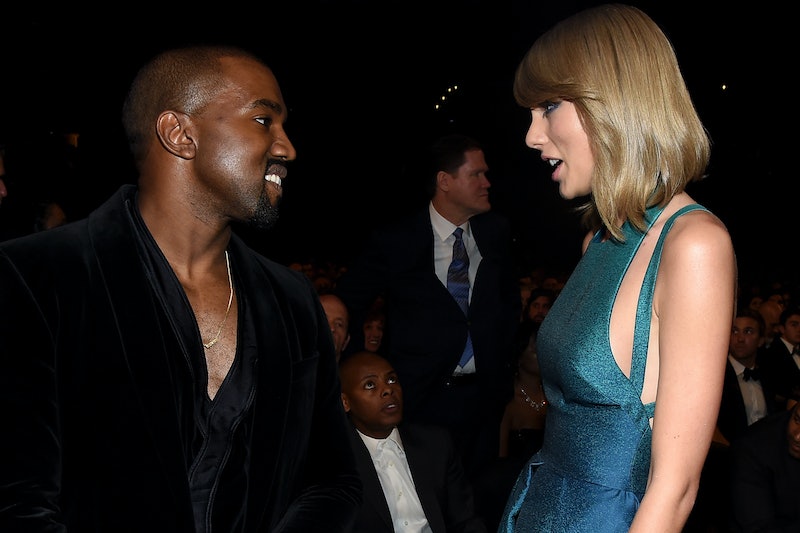 Did you really think that Kanye West wasn't going to address the Taylor Swift vs. Kim Kardashian drama? If so, you obviously don't know the rapper very well. Honestly, I'm shocked he didn't posted an ALL CAPS Twitter rant on the subject immediately after it happened. But perhaps he's maturing — and his latest move adds some evidence to support that notion. On Wednesday night, he crashed his buddy Drake's concert in Chicago. While on stage, West addressed the whole Swift situation. And I must admit, his comments are to-the-point and don't escalate any drama. That may not sound like a huge deal, but for Yeezy, it is. According to Us Weekly, he told the crowd,

"All I gotta say is, I am so glad my wife has Snapchat. Because now y'all can know the truth. And can't nobody talk sh*t about 'Ye no more."

He made these comments right before singing "Famous." If you've been following the whole situation, you know that he's referencing the fact that Kardashian used Snapchat to leak videos of West on the phone with Swift. In the phone call, you can hear Swift seemingly approve of the lyrics, "I swear me and Taylor might still have sex." Although Swift may have OK-ed that part, she claimed she was unaware he was going to refer to her as a "b*tch," when saying, "I made that b*tch famous." And therein lies her issue with the song, which Swift wrote about in a statement posted to Instagram. Here's an excerpt: "You don't get to control someone else's emotional response to being called 'that b*tch' in front of the entire world."

Anyway, back to West's comments: Who would've thought an app like Snapchat could help clear his name? Or in the very least, show he wasn't wrong about reaching out to Swift for lyrical permission. I guess it's a good thing Kardashian is glued to Snapchat.

I will admit that West's "Famous" lyrics are far from positive. They're certainly belittling to Swift's talent and refer to her in a derogatory way. I'm not condoning the lyrics, but instead, the situation is all the more complicated, given the fact that she seemingly approved part of those words. Regardless, in his latest take on the subject, I'm glad West kept things vague enough to still make a statement, but not spark any more trouble. He doesn't diss Swift any further and he focuses on praising his wife instead.

Given the way that he's handled drama in the past, I would have expected him to take things to a different level. After all, he's the same guy who hopped on stage when Swift won her VMA in 2009 and deemed Beyoncé's video "one of the best videos of all time." In other words, West isn't one to hold back. Because of his track record, I appreciate these latest comments not being malicious.

Since West has finally spoken out, does this mean this is the end? I sure hope that's it. There's not much else to say at this point. Unless, of course, there are any other Snapchats that Kardashian has up her sleeves.

More like this
Kanye West Apologizes To Kim K "For Any Stress I Have Caused" In Rare Interview
By Jake Viswanath
Confusion Reigns After Kanye Changes His Instagram Profile Pic To Kris Jenner
By Jake Viswanath
Christian Bale Sang With Taylor Swift & His Daughter Can't Believe It
By Radhika Menon
Did 'Grey’s Anatomy' Just Drop A Major Taylor Swift Easter Egg?
By Grace Wehniainen
Get Even More From Bustle — Sign Up For The Newsletter