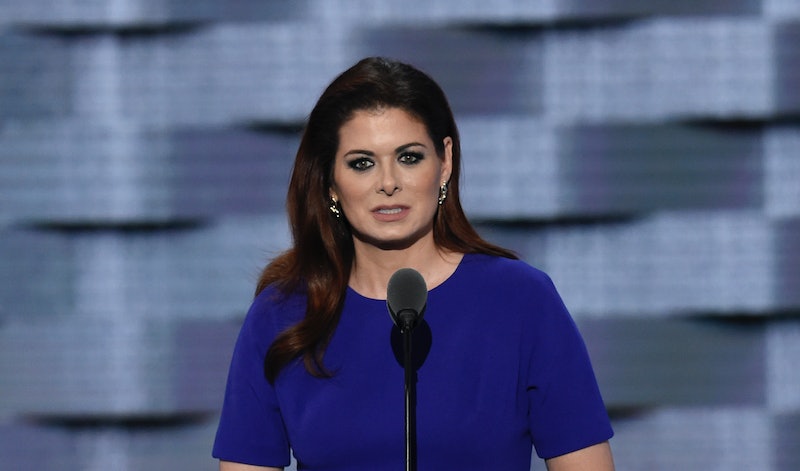 Another day, another political brawl over Twitter. Back in March, Debra Messing and Susan Sarandon engaged in a social media feud after Sarandon told Chris Hayes that she would consider voting for Donald Trump over Hillary Clinton, in the event the two became nominees. Now there's another celebrity that's given a lukewarm approval of Trump, and Messing isn't having it either. The actress took to Twitter once again to share her disapproval with country star Blake Shelton's political leanings, but, like she did in March with the Sarandon debacle, she went about it in the wrong way. However, when she expressed her regret for the comment, it went a long way in making up for the original debacle. In fact, it was very humble of her.

According to his cover story for Billboard magazine, Shelton quasi-endorses Republican presidential nominee Donald Trump. I say quasi-endorses because the quote he gave to the mag isn't necessarily overflowing with approval. However, it was strong enough to nab the attention of the avid Hillary Clinton supporter, Debra Messing, who, when she first got wind of the quote, immediately let the world know that she didn't agree. The world, and Blake Shelton's lady, Gwen Stefani, I mean. Messing tweeted, “Omg. How? @gwenstefani Please talk to your man to not vote for the person who will STRIP you of your rights.”

And here's the quote from the cover story that had Messing scratching her head:

"I'm not going to have the political conversation with you about Trump, or about Hillary Clinton, but I will tell you this: Whether you love him or hate him, he says what he thinks, and he has proven that you don't always have to be so afraid. A lot of people are pulling for him, no matter how much Hollywood fights it. I see people who don't like him go and beat up people that do like him. You tell me, who's crazy here? ... I probably wish there was another option, but there's not."

Shelton quickly responded to the blacklash in a series of two tweets. “Hey before this gets going like it always does… I haven’t [endorsed] ANYBODY for president. And I not going to. I don’t do that s—. My comment about ‘wish there was another option but there’s not’ is across the board…period. Now go dig up another story.”

Messing has been vocal about her endorsement of Democratic presidential candidate Hillary Clinton. She even gave a speech at the Democratic National Convention on July 25. While her Tweet to Stefani doesn't seem ill intended, the way she went about expressing her political views was a little off the mark. A healthy discourse — especially with politics — is crucial. As Obama recently said during his DNC speech, "It's precisely this contest of ideas that pushes our country forward."

The key, however, is delivery. Messing went about delivering her viewpoints all wrong by reaching out to Shelton's girlfriend and not Shelton himself. On top of that, she didn't explain herself very well. Though Twitter only gives you 140 characters to work with, Messing could have taken the opportunity to post a follow up tweet that more thoroughly conveyed the issues at hand. But the actress has since realized the error and tweeted out an apology, writing "Ok - I regret commenting. My passions got the better of me. Sorry. @gwenstefani @blakeshelton"

Blake Shelton made amends quickly, and after an emoji-filled response from Messing, it appears that all hatchets are buried.

It was a very nice resolution to a potential feud, and it was great for Messing to go out of her way to make amends like this. This political race has got everyone heated for various reasons, but the way we choose to express ourselves always matters.