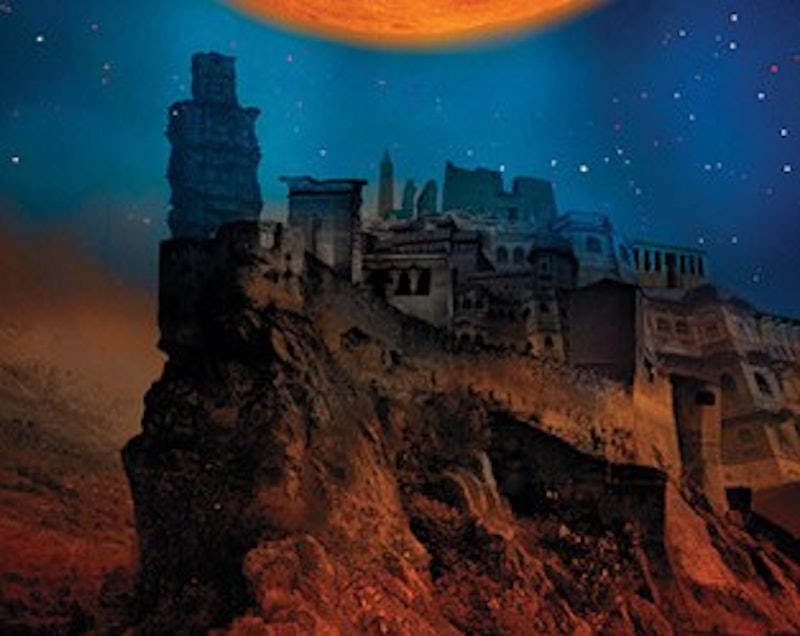 Nothing beats picking up a book and stepping into a strange new realm; fantasy worlds in books inspire us to think beyond the boundaries of reality and keep us sane on long commutes. We all love Narnia, Middle-Earth, Westeros and the like. But have you ever noticed that most of the fantasy worlds out there are just a tad... European? I mean, look, there's nothing wrong with a well-written, faux-medieval, Europe-based fantasy realm. But readers cannot live on Europe-based fantasy realms alone. Here are some wildly creative fantasy worlds that are not set in Europe.

Sure, knights in shining armor and wenches and mead are all well and good. But when every single high fantasy novel takes place in fake old-timey England but with magic and also elves, we start to get sick of it. I don't want to shock anyone, but there are continents besides Europe. Like, everyone understands that the rest of the world existed during the medieval era too, right? And that fantasy does not legally have to be faux-medieval? Because as much as I love correcting people about the various sigils of the houses of the Seven Kingdoms, I also think that Europe has more than enough representation when it comes to fantasy literature. So check out these incredibly creative realms:

Gujaareh is an ancient city-state determined to keep the peace—but any means necessary. The world of The Killing Moon is loosely based on ancient Egypt, but the strange society that Jemisin has created is also utterly unique: Priests of the dream-goddess lurk throughout the city, harvesting magic from the sleeping citizens and executing the condemned. There are no elves, no dragons, and no riding horses across the highlands. Instead, Jeminisn brings us a complex and multi-cultural desert society, ruled by a class of frightened Gatherers.

Earthsea is an archipelago of islands, somewhat resembling the geography of Indonesia or the Philippines. There are no major continents whatsoever. Earthsea is an inventive world, where wizards go to school to perfect their magic, and ships employ weather workers to control the winds. The cultures and people of Earthsea vary, but Le Guin has been very explicit about the fact that the world of the book is non-Euorpean and the characters are non-white.

Bas-Lag is a world of magic and steampunk technology, where scarab-headed women, frog people, and humanoid cacti can live side by side. The world borrows elements of mythology from all over the world, as well as some weirdness that Miéville came up with all on his own. It's a far cry from Tolkien-esque fantasy, with no ties to any real world settings (unless you live in a world in which hedgehog people ride around on giant roosters).

If you're looking for epic fantasy, with all the swords and sorcery but none of the Europe, then you're looking for Saladin Ahmed. He's created a world of vast kingdoms populated by djenn, ghuls, and warriors, all centered around the great city of Dhamsawaat. Throne of the Crescent Moon is an Arabian-based medieval fantasy, filled with rebellion, ghul hunters, and at least one woman with the power of a lion.

5. The Rasan Empire, The Eternal Sky Series by Elizabeth Bear

Range of Ghosts is based on a fantasy version of Central Asia post-Genghis Khan, but the world of the book is not merely a Middle-Earth-but-in-Asia deal. This is a world where the sky changes color as you move between empires. Moons come and go, some people live beneath cherry red skies, and humanoid tigers are a thing. In the midst of it all, an exiled prince and a princess-turned-wizard must make their way through the strange skies and magical realms.

Nnedi Okorafor's Who Fears Death? is slightly different than these other fantasy realms in that it is very explicitly based in an alternate version of Sudan. There is magic and shape-shifting in this world, horrific violence and quests to defeat evil sorcerers. With a basis in Igbo mythology, Who Fears Death? is a brilliantly written departure from the tired worlds of "traditional" fantasy.

More like this
'Mayfair Witches' Already Changed 2 Major Characters From The Books
By Grace Wehniainen
Prince Harry Incorrectly Recites Christina Aguilera’s “Genie In A Bottle” Lyrics
By Jake Viswanath
I Read Prince Harry's 'Spare' So You Don’t Have To: 11 Highlights To Know
By Marina Watts
The 3 Best Heated Steering Wheel Covers
By Margeaux Baulch Klein
Get Even More From Bustle — Sign Up For The Newsletter
From hair trends to relationship advice, our daily newsletter has everything you need to sound like a person who’s on TikTok, even if you aren’t.