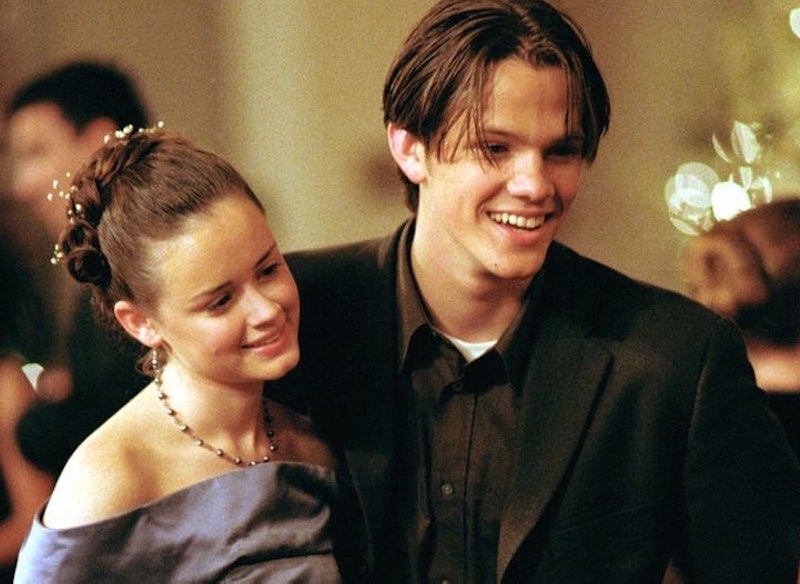 Just when you thought you had Rory's Gilmore Girls revival love life figured out, a new piece of information has surfaced that could completely... change... everything: Like, oh, say, Dean might be in the Gilmore Girls finale, "Fall." That's right, Team Dean: There might be hope for Dean and Rory. But, he's just in one episode, right? Though it was previously known that Jared Padalecki flew in to film his one episode and then returned to work on Supernatural, but thanks to a new, spoiler-ific promotional video for Batman v. Superman: Dawn of Justice , it appears that one episode might be "Fall," also known as the finale.

Is your mind blown yet? It's OK, I'm right there with you. Thus far, all of the focus has been placed on Jess and Logan, because Milo Ventimiglia and Matt Czuchry are around for multiple episodes. Logan in particular appears to be the favorite to win Rory's heart due to the return of his father and The Life and Death Brigade. But, what if all this Logan news is just one giant red herring?

As the last major boyfriend in Rory's life and the only one to ask her to marry him, it makes sense for Logan and Rory to rekindle their romance. If Rory hasn't changed her mind about marriage, Logan could also have moved on with his life, though. They could also be just friends now, or even colleagues since they both work in the world of journalism. If Logan and Rory have stayed in each other's orbit, then she would definitely be invited to his wedding, even if it was a bittersweet experience for her.

See Dean above, in all his adult glory. Gone is the bitter young man with a divorce under his belt at the age of 19, and a future ahead of him that looked bleak. Padalecki is clearly in costume here, since he is wearing a jacket — and the hustle and bustle on set around him suggests this footage was taken during a break from filming. The decorations in the background are all fall themed — note the pumpkins and the bales of hay. All of this indicates to me that Dean's one episode is very likely the final episode, "Fall," which is also the most important episode — and just by looking at his clothes it is apparent the kid has turned out alright after all.

Now, here is what is known for sure about Rory's love life: Rory will be single, but dating when the season starts. All three of the men she has had serious relationships with will be a part of her life during the course of the year the revival spans. It has been confirmed Rory will "end up" with one of them. It should be noted "end up" with doesn't translate to married to though.

The episode "Fall" will cover an entire calendar season, and if Dean returns during that time frame unmarried with his life together, he could reconnect with Rory. They were each other's first love, after all. If Logan is getting married, this could be a confusing time for Rory, a time in which the always stable Dean could offer clarity. In the end, Rory could find that she still cares for Dean, the guy who was always there when she needed him.