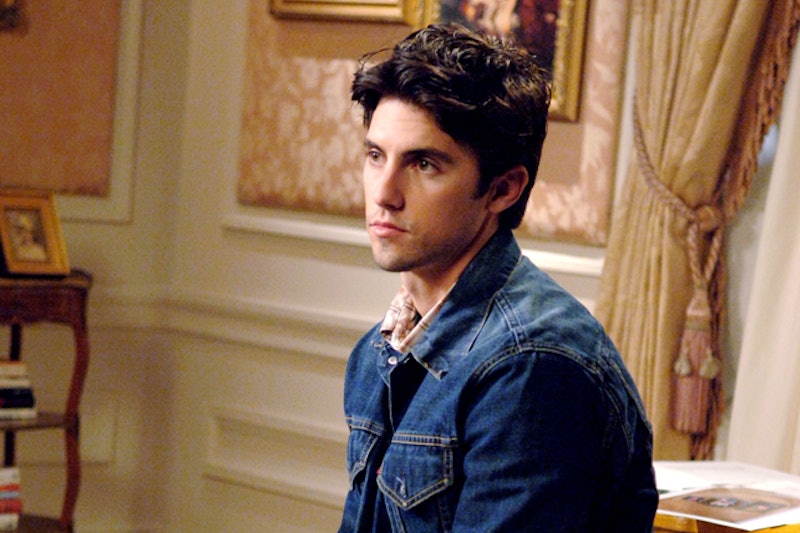 It's hard to fathom why any of us left Stars Hollow almost 10 years ago. From the picturesque landmarks and quirky townsfolk to the eccentric, tight-knit community, Stars Hollow has always been our home. The idyllic warmth that come from this small town — which Rory and Lorelai called their home for the seven seasons — was hard to not be swept up into. And now, the same can be said for Milo Ventimiglia, the 39-year-old actor who played Jess Mariano in the series. Now, nearly 10 years after Gilmore Girls ended its run, Ventimiglia is back as the bad boy, leather-jacket-rocking heartthrob in the reincarnation four-part series, Gilmore Girls: A Year in the Life, which will air on Netflix. But, while the highly-anticipated revival won't premiere until November 25, that didn't stop Ventimiglia from divulging exactly why he returned to Gilmore Girls.

"It's interesting stepping away from a character and then going back to them," Ventimiglia said, speaking to E! News during a reception for his newest project, This Is Us. "There's something about Jess that I always appreciated. It was at the very end that I thought for whatever angst, whatever broken spirit, whatever sly behavior he had, who he was at his core was a very, very good guy. I think that started to emerge as time went on. We got to the end of his existence on the show, you see him—he's not there for himself, to entertain himself, he's there to ask Rory real questions to get her thinking. I always respected that about the character," he said.

After the series became a renewed hit thanks to its addition to Netflix's streaming catalogue, the push to have it revived was undeniable. Ventimiglia said just as much, according to E!: "The fact that people were buzzing about it was a testament to the writing. Dan [Palladino] and Amy [Sherman-Palladino] are such incredible writers and they really did create this show that is timeless. It's timeless.

"The excitement to bring it back doesn't surprise me. I think audience were left wanting more, they weren't quite satisfied with the end. To sort of bring it back it didn't feel like a cheap play for money. It actually legitimately genuinely felt like a love letter to fans who were wanting more stories and to live with these characters again. For that, I applaud Dan and Amy and the cast that came back, Warner Bros. for doing it and Netflix for putting it up." So, obviously when asked to come back to the SH, Ventimiglia knew he just couldn't say no. "I stayed very, very close to Dan and Amy. They're family to me. When they actually called and said, ‘Hey Mi, we're going to do this,' I said, ‘Great, I don't care where I am, I could be in Tunisia, feeding f*cking seals. I will show up.'"

The beauty behind both Ventimiglia's confession and his love for his character proves how much of an immense impact the show holds for those who watch as well as those who participated. November clearly needs to come faster.

More like this
Netflix Reveals First Look At Wednesday In The 'Addams Family' Spinoff Series
By Bustle Editors
What Does Nancy Jo Sales Think Of 'The Real Bling Ring'?
By The Editors
12 ’90s Movie References You Missed In 'Do Revenge'
By Radhika Menon
Twitter Is Unravelling Over Wolverine’s Return For 'Deadpool 3'
By Darshita Goyal
Get Even More From Bustle — Sign Up For The Newsletter