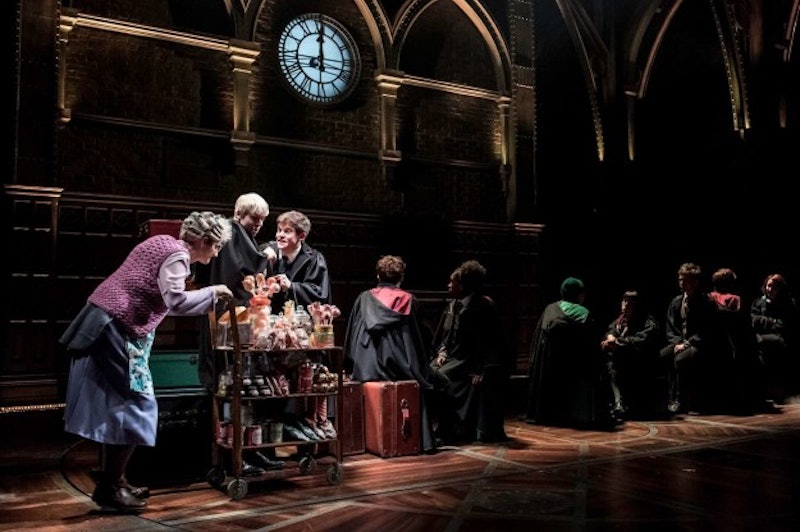 If you're looking for some #SquadGoals for 2016, look no further. Albus and Scorpius are friends in Harry Potter and the Cursed Child , and it is, perhaps, the cutest most pure and perfect friendship the series has ever represented. It makes even the ride-or-die Golden Trio look like a casual book club. (WARNING: Spoilers ahead!)

A lot of people speculated before Cursed Child was released that the script would focus primarily on the friendships between Scorpius, Rose, and Albus, and that the three of them would serve as a next gen trio — but the narrative swallows up that idea pretty quickly, instead focusing on the very unique and at times heartbreaking friendship between Albus Severus Potter and Scorpius Malfoy. Despite their fathers' pasts, they immediately get on, united by their feelings of not "belonging" at Hogwarts. Scorpius is the victim of a wild rumor that, unable to conceive, his parents used a Time Turner to impregnate his mother and that he is the child of Voldemort. Albus, of course, is the victim of his father's legacy, which becomes more and more of a burden as he discovers he lacks his father's intuitive talents and is sorted into Slytherin. Friendless and often made fun of or shut out by their peers, they take solace in their friendship — a friendship that, by the end of the two-part play, is so strong that it really knows no bounds.

I'm not going to lie, everyone — I was high key hoping for some friendship between these two (and even 'shipped it not-so-secretly), and as far as friendship goes, this script more than delivered. Throughout the course of the play the pair is constantly following each other into danger, sticking together no matter how harebrained or (let's face it) hella stupid their plans are. They are each other's champions and defenders, not just standing up to other students, but to their families, as well.

And most remarkably, this friendship is so, so pure. In 2016 it's rare to see a male friendship depicted so sensitively and emotionally — and even rarer to see a father appreciate it. In one of the best lines of the novel, Draco confronts Harry because his son is "in tears" after Harry forced Albus to stay away from Scorpius. The poignance of this is not lost on the reader — Draco's own father would not have been concerned for a friendship, but rather affronted that Draco was open enough to cry in the first place, whereas Draco is so invested in his son's emotional welfare that he would never shame him for expressing his feelings. Both the friendship and the depiction of fatherhood in this narrative deviate refreshingly away from the toxic masculinity we often see depicted in male friendships and father/son relationships. Scorpius and Albus are basically the poster children for how men should be able to express their love for each other. #FriendshipGoals all around.