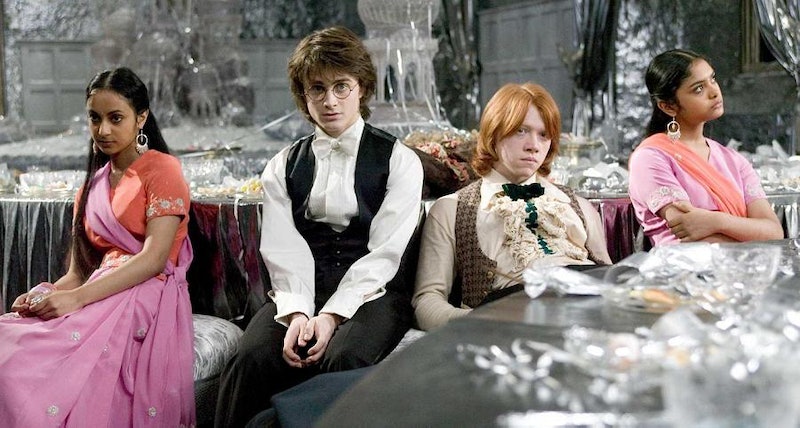 Now that you've finished processing the twists of fate that Harry Potter and the Cursed Child threw at you, you probably have some lingering questions (SPOILERS AHEAD!), including why are Padma and Ron married in the alternate reality? A lot of strange things happened when the past was changed, but this was by far one of the strangest.

When best friends and time traveling heroes Albus Potter and Scorpius Malfoy use the Time-Turner to prevent Cedric Diggory from succeeding in the first event of the Triwizard Tournament, the pair changed less then they hoped to. Cedric still won the competition alongside Harry, and he was still murdered at Voldemort's command. They didn't accomplish their goal, but their interference with the past did have other surprising effects on the future. One of the most surprising? In Scorpius's words, "Ron and Hermione have gone completely skewwhiff."

As it turns out, Ron and Hermione aren't married in this alternate reality, and it's all Scorpius and Albus's fault. When they were dressed as Durmstrang boys in the past and spotted by Hermione, she becomes suspicious of their behavior, believing they, on Krum's command, sabotaged Cedric. Because of it, she doesn't go with Viktor to the Yule Ball, and instead attends the dance on Ron Weasley's arm.

You might be thinking to yourself, doesn't that mean they still got together? Sadly, no. The pair have a nice time at the dance, but only as friends. That night, though, Ron steals a dance with Padma Patil, and the two fall in love. They get married and have a son, Panju, who seems to cause as much trouble as Fred and George Weasley used to, and Hermione is the Defense Against the Dark Arts professor of Hogwarts, as strict as Professor McGonagall was Harry's first year.

Ron and Padma may be married, but they don't seem happily married. Ron describes his wife to Albus as a woman who "Talks slightly too close to your face, smells a bit minty," and makes references to her strictness and her temper. When he runs into Hermione in the hallway, they have a romantically tense moment where Ron, in his very Ron way, tries to compliment her. It's enough to make you blush and cry all at once.

Sorry to say, Ron and Hermione shippers, but in Harry Potter and the Cursed Child , the pair don't seem meant to be. Between marrying other people and this reality, and — get the tissues — dying after sharing their first kiss in the other, it seems the couple was truly lucky to find each other in the unaltered course of their lives.