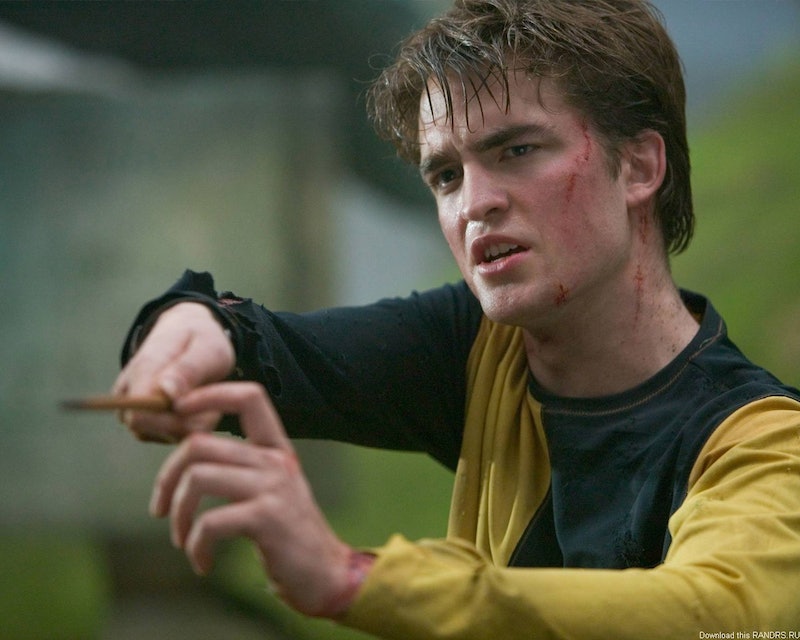 Warning: Spoilers ahead! Yesterday I thought I knew who I was and what I stood for and where my place was in the world. But guys, now that I've finished reading Harry Potter and the Cursed Child and watched fellow Hufflepuff Cedric Diggory become evil in an alternate timeline, I just don't know anymore.

See, as a Hufflepuff — or, somewhat more accurately, a Slytherpuff (I was told to choose) — I have always taken comfort in the existence of Cedric Diggory. Although Hufflepuff gets a lot of flack for being perceived as less remarkable than the other Hogwarts houses, Cedric was proof that the clichés about Hufflepuff were nothing more than clichés. He served as the main Hogwarts champion, he was brave and just and fiercely loyal, and embodied everything that was great about Hufflepuff House. Here was someone who was brave, but not reckless; who was fair, but humble; who was both selfless and self-assured.

Until Tonks came along with her own brand of badassery, and until J.K. Rowling publicly defended Hufflepuffs multiple times, Cedric was all we had to represent us. So yeah — watching Cedric turn evil based off of one slight alteration in the timeline? That was brutal AF.

In case you were unclear as to how this happened, Albus and Scorpius used a Time Turner to go back and essentially humiliate Cedric, so that he would lose the Second Task in the Triwizard Tournament and not die at Voldemort's hand. The ripple caused Cedric to become bitter enough to eventually join the Death Eaters, pulling such a 180 that he murders Neville Longbottom before the events of the seventh book.

Once the shock wears off, however, the truth of it is a little more scary. Yes, he's a Hufflepuff. And yes, that means that fundamentally, in his core, he should not have been capable of what he supposedly did in the other timeline. But we've seen people go against their houses before, haven't we? No case is more shocking in Harry Potter canon than that of Peter Pettigrew, the loyal Gryffindor who betrayed all three of his best friends in one go.

This brings up a somewhat underrated problem at Hogwarts, one that Dumbledore himself brings up by saying, in regards to Peter, "I sometimes think we sort too soon." From a psychological standpoint, certainly, it is extremely unlikely that the person you are at 17 will resemble the person you are at 11, which seems like a very plastic and flexible age — certainly not one to ascribe a personality set to a child for life. Is Cedric's turn to the dark side more commentary on the issue of the Sorting at Hogwarts?

More poignantly, though, Cedric turning evil points to a huge them in the narrative: choice. We are introduced to Delphi, this person who is in all regards exactly like Harry Potter. She is born and raised in the same circumstances, suffers the same burdens, and is essentially a foil to him — a representation of the Harry Potter that might have been, should he have made different choices. While the two characters grapple with destinies that were prophesied for them before they were born, the narrative shows us these parallels between the two of them to indicate that, in the end, their fates were dependent on their choices — not on the fates that were supposedly decided for them.

Thankfully it was resolved in the narrative, and Cedric will still have a legacy as the hero and undeserving victim that he was. But still — this play serves as an ominous and important reminder that nobody is wholly good or evil, and the responsibility to navigate that rests solely on our own shoulders.