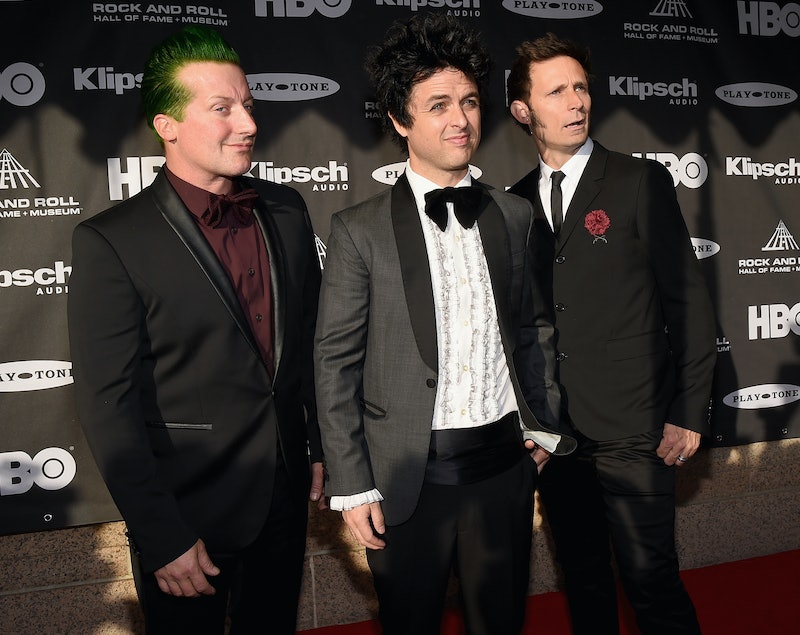 Sadly, the biggest questions in our world are no longer whether chicken of the sea is chicken or tuna, or why the heck the Star Wars prequels exist, or even what the definition of a wardrobe malfunction is. The world sometimes feels like a much scarier place since 2005 — the year we were all still jamming out to Green Day's 2004 album, American Idiot — and a lot has changed. But one thing has sort of stayed the same which is that, according to an August 1 Instagram post from band member Billie Joe Armstrong, Green Day has a new single coming out. Get excited, because all the nostalgia you miss from the early '00s could be yours.

Green Day's last project came out in 2012 and was a trio album called ¡Uno!, ¡Dos! and ¡Tre! (Tré Cool's the drummer. Do you get the joke?) Since then, we've been particularly Green Day-less. But, with a new single, we could perhaps soon hear of a new album. The caption of the image Armstrong posted reads, "Dear friends! green day is putting out a new single called "BANG BANG" August 11. stay tuned for more details.. photo by Frank Maddocks #mynewband." So Armstrong's old band is his new band, but it would seem they've got a new bag of tricks (or at least a new song).

It's unclear which way a new album, or the single, will go. As the years have passed since their debut album Dookie in 1994 to the present, Green Day has gone from a more punk and political vibe to something slightly more pop-themed. Maybe this song will not harken back at all to work of the early '00s, but I'm incredibly hopeful for a 2005 feeling.

No matter what the case, the gang definitely seems to be feeling the goofy, punky vibes of old. Another photo shared on Instagram by Armstrong shows Tré Cool tooling around in the studio, and it looks like the guys are having a great time.

With the information the band has shared, I'm hopeful we'll get 2005 back. It would be cool to use Green Day as a time travel device to the beautiful years of our youth, just for nostalgia alone.