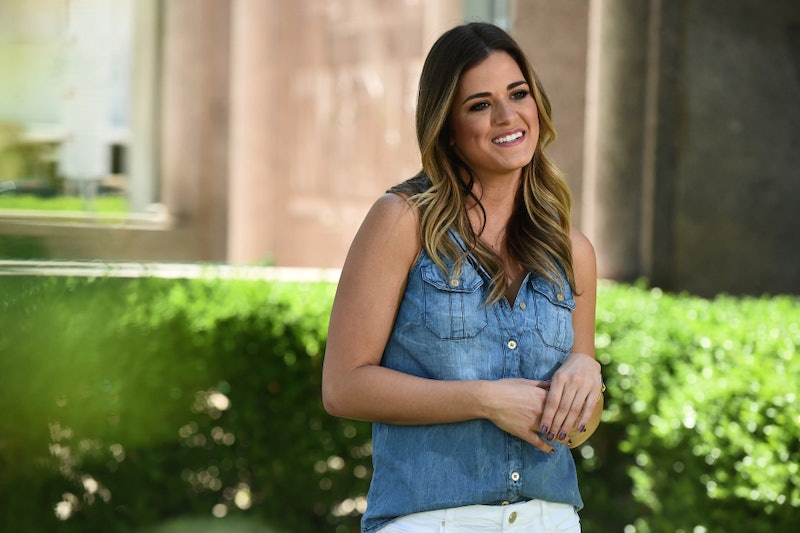 Well, Bachelor Nation, we've officially come to the end of The Bachelorette Season 12 and it's time for JoJo to make her final decision between Robby and Jordan. Now, I'm sure everyone has their idea of who JoJo should pick between the two, but the decision was actually made a few months ago. Still, although JoJo may have been engaged following the Final Rose, that begs the question: Is JoJo still engaged after The Bachelorette season finale?

Of course, there's no official confirmation at the moment considering the finale hasn't even aired yet, and JoJo has been annoyingly (at least, if you're a member of Bachelor Nation who doesn't enjoy waiting for details) good about keeping spoilers to herself. Plus, based on promos for The Bachelorette season finale, it seems JoJo's decision will not be an easy one — could that mean she makes a mistake and picks the wrong winner? Do we have a Jason Mesnick situation on our hands? I, for one, have no idea how the finale will play out or whether JoJo will end up finding her forever partner. But, we will get some answers on After the Final Rose when Chris Harrison will undoubtedly grill the Bachelorette couple on everything to do with their current relationship — especially whether they're still together and when they'll be officially tying the knot.

Still, for those of us who can't wait until After the Final Rose to find out whether JoJo is still engaged to her winner, there are always rumors floating around online. Now, I try not to put too much stock in these rumors, but one particular source of Bachelorette information, Reality Steve, claimed on Twitter that JoJo and her winner are no longer together.

Of course, though Reality Steve has been right in the past, this is still just a rumor and, it's important to note, Reality Steve has been wrong in the past as well. That said, based on the number of couples who end up splitting post Bachelor or Bachelorette, JoJo and her suitor don't necessarily have numbers on their side. While the most recent Bachelor and Bachelorette couples — Ben Higgins and Lauren Bushnell as well as Kaitlyn Bristowe and Shawn Booth — are still together, the majority of final relationships have ended since their respective seasons.

But, that's not to say JoJo isn't still engaged! She certainly could be, and no matter what happens on After the Final Rose, we'll at least get some kind of insight into what's been going on with the Bachelorette since her season ended — whether that includes living happily in engagement bliss or ending her relationship remains to be seen. Personally, I just want to see JoJo happy. After what's sure to be an emotional finale, I want to see a happy ending for this particular Bachelorette.