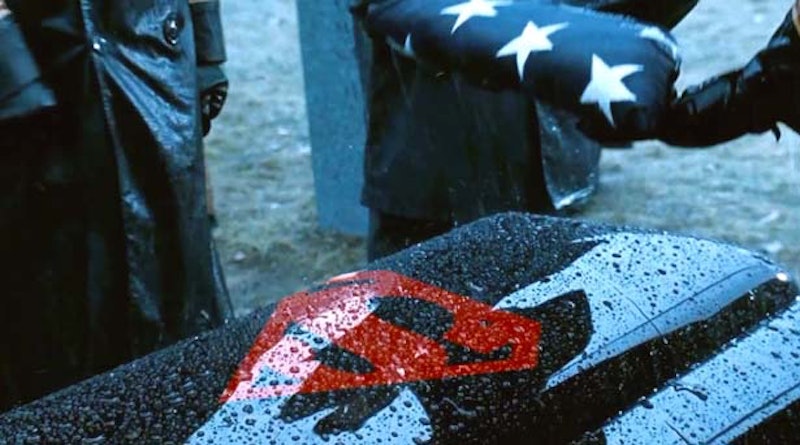 As anyone who's seen Batman v Superman: Dawn of Justice can attest, Superman doesn't make it through the movie alive. The Man of Steel perishes while battling Doomsday, sacrificing himself in order to save the world. But then a funny thing happens. At the very end of the film, during Superman's funeral, his coffin is shown to vibrate, causing some loose soil to float off its lid before the screen turns black. This seems to indicate that maybe he's not dead after all. So with the DCEU returning to theaters, fans are wondering if Superman is still dead in Suicide Squad .

Sorry, Superman fans, but the Last Son of Krypton is still deceased in Suicide Squad . The film takes place after the events of Batman v Superman , and the plot revolves around the emergence of these superpowered metahumans that are popping up around the world. That's the reason the Suicide Squad is assembled to begin with — to do battle with these new enemies. Superman is arguably the most powerful of these metahumans, but the good guys can't count on him being on their side in the film since, as far as everyone knows, he's still dead (it's mentioned early in the film that Superman is no longer around). So is he ever coming back?

Although Superman is noticeably absent from the first trailer for Justice League , basically no one believes that he won't return for that film. The character's death was essentially undone ten minutes after it occurred in Batman v Superman with the floating dirt scene, and it hasn't been much of a secret that the plan in Justice League is to unite Superman, Batman, Wonder Woman, and the other new heroes entering the DCEU. Henry Cavill, who portrays Superman, is also listed among the cast for the film on IMDb, and he's even been spotted on the film's set. So Superman will definitely be back — just not for Suicide Squad .

But just because there's no Superman, that doesn't mean the movie is without big-name superheroes. Ben Affleck's Batman makes an appearance, as does Ezra Miller's The Flash in a blink-and-you'll-miss-it cameo (makes sense). Plus, the bad guys are acting as heroes in the movie, adding a whole litany of names to the list of good guys (even if it's only temporary). So with basically everybody stepping up to fight evil in Suicide Squad , who needs Superman?