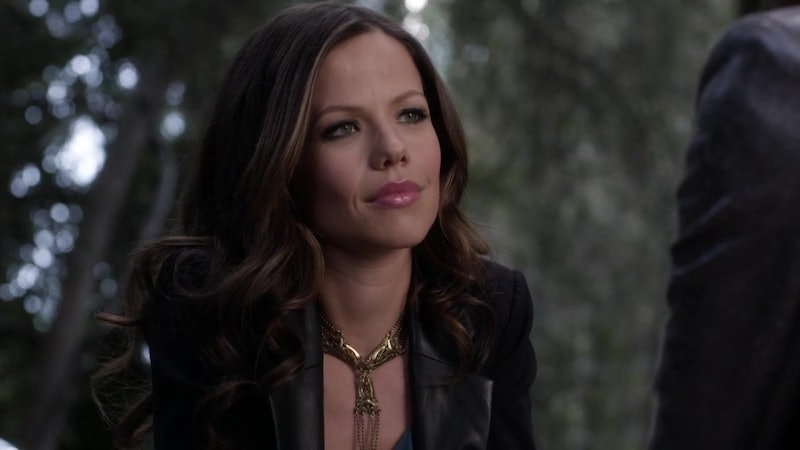 Pretty Little Liars is bringing back all of the shady characters that you loved. Of course, the one return that the Liars are really worried about is that of their former frenemy Jenna, who made a surprise appearance at the Liars' brunch in "Hit And Run, Run, Run." There's a bitter history between Jenna and the girls — I mean, they were accomplices in the accident that blinded her, after all — and Jenna's return to Rosewood so shortly after Hanna accidentally killed Dr. Rollins is certainly suspicious. However, there's one thing about PLL 's Jenna that may explain her real connection between her and Dr. Rollins that you may have completely forgotten about.

Jenna is not the only character to be back this season. Noel made his triumphant return to the series, Jason is returning to Rosewood later in the season, and even Emily's former bae Paige will head back to her old stomping grounds. However, Jenna's return could be the most significant. At the end of Season 6B, Dr. Rollins dressed up as Detective Wilden, the cop that Charlotte killed, in order to torture Alison and have her commit herself to a mental institution. Later, in Season 7, Emily and Aria find that Dr. Rollins had pictures of Detective Wilden and a mold of his face in his "burner apartment," implying that Dr. Rollins was spending a great deal of time getting Detective Wilden's appearance down.

What if that wasn't the only thing he was working on excelling as? Perhaps Dr. Rollins needed help to master the cop's mannerisms — which is why he turned to Jenna.

In the Season 2 episode "The First Secret," we see Jenna talking to Detective Wilden at Noel's Halloween party. Later, when Detective Wilden is killed, Jenna tells the Liars that she was a friend of Wilden. Though we never quite understand why or how they became friends, given Wilden's overall shadiness/murderous tendencies, it could very well have been for nefarious reasons. Whatever the reason for their alliance, Jenna likely knew Wilden's mannerisms like the back of her hand — could Dr. Rollins have called upon her to help him impersonate the dead cop?

It would make a lot of sense, especially if Jenna was told that doing so would help mess with Alison. Jenna and Alison have never made amends, so, if Dr. Rollins reached out to Jenna and told her that this plot was part of a punishment for Alison, she would likely be onboard. Even if Jenna didn't know the extent of what she was agreeing to, I think it's safe to say she would be willing to hurt Alison. After all, she thought that her boyfriend killer her at her request for over a year.

If Dr. Rollins did ask Jenna for help "becoming Wilden," it might explain that weird phone call — and why Jenna is back in town. Here's hoping we get an explanation for Jenna's shadiness soon — we're officially running out of time.