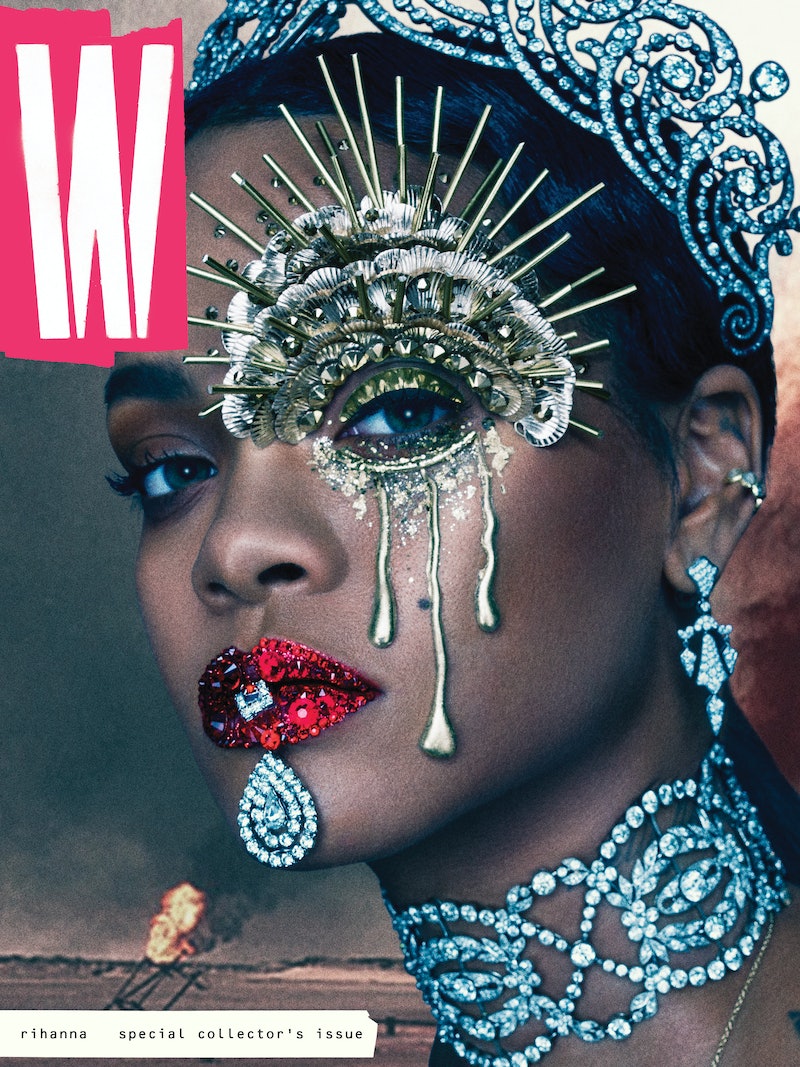 Rihanna is "the baddest b*tch of the post-apocalypse." She's the pop star that is sure to make it through a nuclear fallout or at least a record industry in major flux. Not Beyoncé; not Adele; not Taylor (Swift). Rihanna. That is, at least, according to Rihanna's W Magazine September cover interview, which featured this unapologetic statement about who would survive the apocalypse — and look good doing it. Rihanna dresses up as the most feminist hero probably ever put to film, Mad Max Fury Road's Imperator Furiosa, and the spread has Rihanna playing the role of "the last woman on earth and the ruling warrior queen in a dark, dystopian future." in custom made Prada and Margiela just for her. While there's no doubt Rihanna could pull Furiosa's look off, it's easy to see other similarities between the two women.

In the 2015 film, Furiosa, played by Charlize Theron, is living in a post-apocalyptic hell where water is rationed and women are relegated to being baby-makers. Furiosa is not one of those women though. She's unable to procreate and is instead a road warrior, who uses her position to smuggle the young wives of the tyrannical leader Immortan Joe out of the Citadel. Rihanna isn't smuggling women out of any Citadels, but she is allowing them to let go of their pasts, showing them they can forgive themselves for any mistakes they've made, or the mistakes that others have made against them. Rihanna shows women that they can move forward.

Rihanna's life, much like Furiosa's, had been defined by other people — specifically men. Both Furiosa and Rihanna were unfairly seen as broken, but it's in this assessment of who others think they are that each of these women found their power. Being assaulted by Chris Brown on that February night in 2009 turned Rihanna into a victim. In a 2015 interview with Vanity Fair, Rihanna opened up about the incident, saying she was unfairly asked to be "a poster child for victims of domestic abuse" and had to relive the horrific event over and over again in the media, which made her feel like she was being continuously punished for the events of that night. She was not in control of her story, but, on her 2016 album, Anti, Rihanna got her chance to take the narrative back by opening up about love in an honest way.

Like Furiosa who managed to outsmart Immortan Joe and his War Boys, with this album Rihanna managed to outwit the male-led recording industry, which wanted her to be some cookie cutter pop star and not the creative powerhouse she really is. Rihanna never mentioned Brown by name on the album, but this didn't mean many listeners weren't trying to figure out which Anti songs were about Brown. However, this album was a kiss-off to any man who ever underestimated her. Rihanna wastes no time letting this be known, kicking the album off with "Consideration," a song that has her proclaiming, "I got to do things my own way, darling."

These songs, which were written by Rihanna (a first for her) aren't for Brown or for any other man. No, these songs are for her, and any other woman who has been through something that was deemed their defining moment without their permission. Rihanna, like Furiosa, gives women an example of strength that can be feminine. These two women gave other females a new hero to look up to: women that aren't afraid to do what's right in their own way. Women who don't play by the rules, but instead write their own.

With a shaved head and a robotic arm, Furiosa is the one driving the Fury Road plot — Max is just her sidekick. And it's clear, on Anti, that Drake is Rihanna's sidekick. Just listen how Drake pines away for RiRi in his lyrics, while she seems to keep going. Drake eyes may be on her, but Rihanna's eyes are always on the prize, too busy to just spend her time on love. She made this clear in Vanity Fair last year when she said, “I’m fine being with myself. I don’t want to really let anybody in. I’ve got too much on my plate, and I’m not even worried about it.”

Rihanna will not be defined by anyone else and neither will Furiosa. Fury Road director George Miller said that the character he created was one of a kind, thanks to the woman who played her. “You can dress up as Furiosa, but to be Furiosa, you’ve got to be Charlize [Theron]."

The same could definitely be said of Rihanna. She doesn't look like the other pop stars; she sets the trends. And as much as her fans try to cop her style by buying her Pumas, Dior sunglasses, or other looks she's put her stamp on, there is still only one Rihanna. She's unafraid to do what she wants and, because of that, has become a trendsetter on her own terms, a savior of pop. A woman you'd want by your side during the apocalypse.