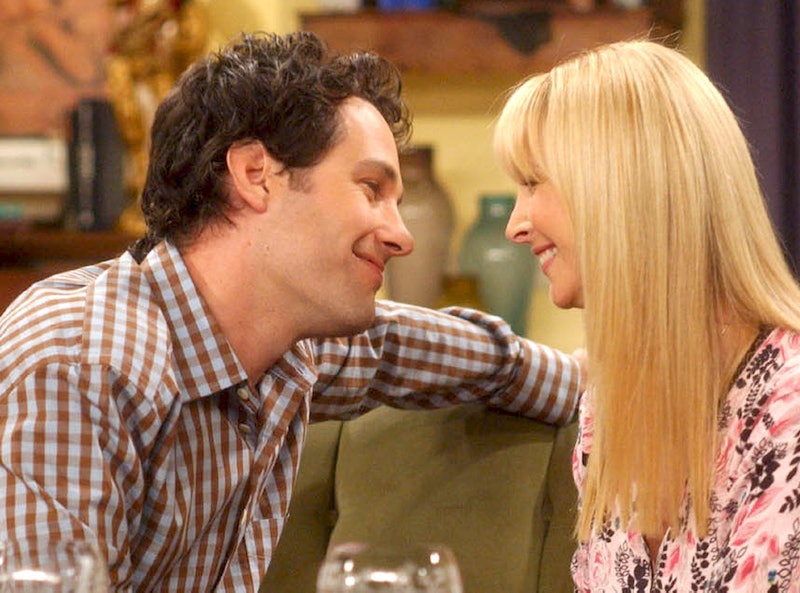 Just when you think you know everything there is to know about Friends, another new piece of information appears to change the way you look at the Central Perk crew. In a recent interview with The Huffington Post, Hank Azaria — who played Phoebe's scientist love interest David — revealed David and Phoebe were supposed to be endgame. That's right: Phoebe almost chose David over Mike (Paul Rudd). While I am sure this information both delights and infuriates David and Phoebe shippers, the thought of Phoebe not having a happy ending with Mike makes my heart break a little.

You have to admit, Mike and Phoebe were all kinds of adorable, especially considering how the universe aligned just right so Joey could find a "Mike" in Central Perk in time for Phoebe's date. These two were clearly destined. While Azaria is not 100 percent sure why the writers reportedly ultimately decided not to have David return from his research gig in Minsk and have Phoebe fall for him all over again as planned, he does have a theory: "I think, honestly, what happened was Paul Rudd is so awesome that they sort of found a groove with him and [my character] became more of just the grist for that mill," Azaria told Huffington Post. "As opposed to the other way around."

Rudd's trademark charm strikes again! Azaria also confessed the David part of him was bummed Phoebe and David didn't end up together, but he ultimately believed Mike was a worthy partner for Phoebe. In truth, it is a bit sad that Phoebe and David didn't work things out — before Mike appeared on the scene, David was arguably Phoebe's truest love — the wonderfully timid scientist complemented Phoebe's eccentricities beautifully. It would have been hard to be mad at the show if they had decided to give David and Phoebe a second chance instead of bringing him back just long enough to bring Mike and Phoebe closer.

In the end though, the writers made an excellent decision when they changed their plans. As much fun as Phoebe and David were, Mike and Phoebe were — to borrow a phrase from Chandler — perfection. From the moment Mike played his imaginary air piano for Phoebe it was clear they were meant to be.

Maybe there is a parallel universe out there where Phoebe travels the world with her scientist husband playing "Smelly Cat" at coffee shops across the globe. I'm sure that is a lovely universe. I am quite happy to live in the one where Mike and Phoebe lived happily ever after in mutual weirdness though.