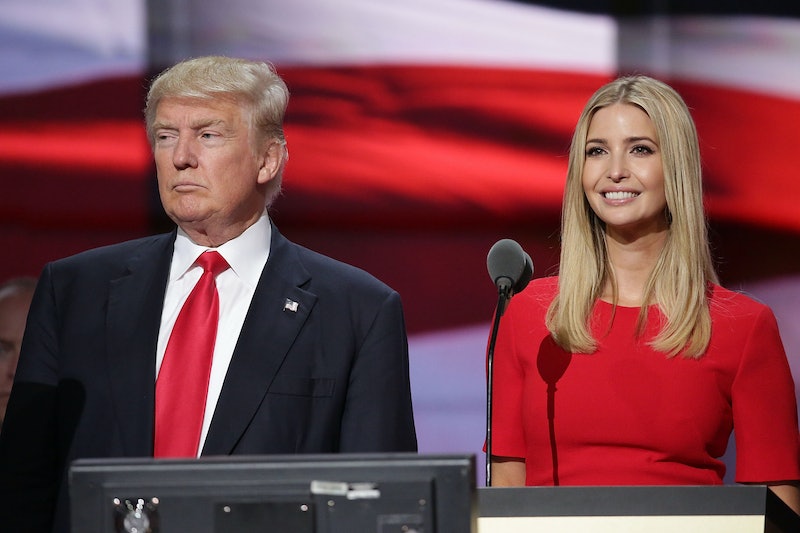 Like a lot of people, I wasn't just disappointed by the comments Donald Trump made about workplace sexual harassment this past week — I was furious. I wasn't just furious because Trump's comments in USA Today about how, if his daughter Ivanka were sexually harassed at work, “I would like to think she would find another career or find another company," didn't acknowledge that there are actually regulations against sexual harassment in the United States. I was also furious because his comments — like those of his son Eric Trump, who claimed that Ivanka is a "strong, powerful woman" who "wouldn't allow herself to be subjected to" harassment — ignored the fact that for the vast majority of women, deciding what to do about workplaces harassment isn't an issue of "strength" or "power." It's an issue of knowing your rights — and it's also an issue of money.

The concept that dealing with sexual harassment is, like Donald said, "up to the individual," is a toxic idea. And I should know: A number of years ago, when I had no savings, few job options, and almost no understanding of my legal rights, I experienced sexual harassment at a former workplace. It made me feel unsafe and anxious — but more than anything, it made me worry about whether I was going to take a financial blow for reporting it.

Bustle spoke with Eleanor Smeal, president and co-founder of the Feminist Majority Foundation, publisher of Ms. magazine, and former president of the National Organization for Women, who told us that not only do Trump's comments ignore the fact that "we do have some protections under the law at the state and federal levels" from sexual harassment; they also ignore the fact that for many women, leaving a job where they are being harassed is impossible. "You can't just up and change your career," Smeal says. "In a lot of places, a woman can't quit. Not only can't she afford it, but there's not that many employers in a lot of towns," so if you walk out on the one job in your area that fits your skills, "you could be unemployed for a long time... it's unrealistic advice."

"You don't have to put up with it and you shouldn't."

When I experienced sexual harassment, I knew that it was frowned upon culturally, and that most companies had policies against it (including the one where I worked). But I didn't understand that sexual harassment was something that was considered "a form of sex discrimination" by the U.S. Equal Employment Opportunity Commission, one that "violates Title VII of the Civil Rights Act of 1964." I also didn't know that "harassment is illegal when it is so frequent or severe that it creates a hostile or offensive work environment or when it results in an adverse employment decision (such as the victim being fired or demoted)." I was mostly just scared that no one would believe me, or that I would end up out of a job if I tried to prove it. I believed, like Donald Trump, that I was on my own.

Smeal also points out that the isolation created by advice like Trump's gives an advantage to those who use sexual harassment as a strategy to keep women out of traditionally male jobs. In some cases, Smeal says, "I believe that harassment is used to keep out the competition" in these traditionally male-dominated fields. In these situations, the harasser is counting on the harassment victim feeling like she is all on her own, and has no recourse but to "find another career." Treating sexual harassment as a person problem — rather than an endemic cultural issue that we should all be invested in solving — plays into this.

Because I didn't know my legal rights, I took the path that I thought would put my financial future in the least jeopardy — I reported the incident to my then-workplace's HR department, where I had staff members ask me if I thought my harasser "should" be fired, and tell me that someday I would "look back on this whole thing and laugh." I kept showing up for a job that still kept me in fairly close contact with my harasser, as I looked for jobs in one of the worst economic climates of my lifetime. My harasser took a sensitivity workshop, and was told not to talk to me; I was asked not to mention the situation to my co-workers.

I think of myself as a strong, powerful person — and I can tell you, strength and power have nothing to do with the way I reacted to that situation. Because I was barely able to pay my bills at the time, I was too afraid to really defend myself, or my right to stay at my job — what if I ended up stuck with no job at all?

As the American Association of University Women's Vice President of Government Relations, Lisa Maatz, told Bustle, I was from alone in my response: "While 25 percent of working women say they have been sexually harassed, at least 85 percent of harassment cases don’t result in a claim being filed, and 70 percent don’t even result in internal action. Why? Because women often fear retaliation in the workplace if they come forward." In fact, even Ivanka Trump herself hasn't been fully immune to the experiences that her father and brother can't imagine her enduring — in her 2009 book, The Trump Card, she recounts being whistled at by workers at one of her father's construction projects. She goes on to note that they apologized after they realized who her father was — an option obviously not available to most of us — though she also "had recurring nightmares about being catcalled on a job site in the weeks before she started" her next job, according to the New York Times.

In fact, not being able to pull any kind of financial "trump card" (pun always intended) is why so many of us who are harassed shy away from reporting it, or don't pursue further actions against our harassers. We're afraid of receiving retaliations that have financial consequences for us — which, as Maatz noted, can take the form of anything "from outright firing or unfavorable assignments to lost raises and promotions. Women's livelihoods are at stake, which is part of what makes sexual harassment so insidious. Expecting the woman to simply leave the job when such harassment occurs is another form of victim blaming, and if she does leave that insult's compounded by lost wages and job insecurity."

I did eventually end up following Trump's advice — I changed jobs, and have worked to put the experience in the rearview mirror. But I do wonder what could have happened if I had understood that I had other options. Smeal says she'd advise a young woman going through the same thing to "organize, and ... fight."

"I think every person has to determine their strategy, but also I would join progressive groups — and get a good lawyer from those groups," she said. "I believe you do better if you fight with a group."

The solution isn't further isolation, or thinking that sexual harassment is somehow your own fault, a sign of some kind of character weakness — it's understanding that sexual harassment is a discrimination issue, one that no one should be expected to deal with on their own. Because, as Smeal says, "you don't have to put up with it and you shouldn't."

More like this
10 Times Boris Johnson Got It Wrong On Trans Rights
By El Hunt and Sam Ramsden
How To Protect Your Digital Privacy If You Need An Abortion Post Roe v. Wade
By Kaitlyn Wylde
How To Support Gun Control Reform Right Now
By Morgan Brinlee and Carolyn Steber
The Church Of Scotland Votes To Allow Same-Sex Marriages
By Sam Ramsden
Get Even More From Bustle — Sign Up For The Newsletter