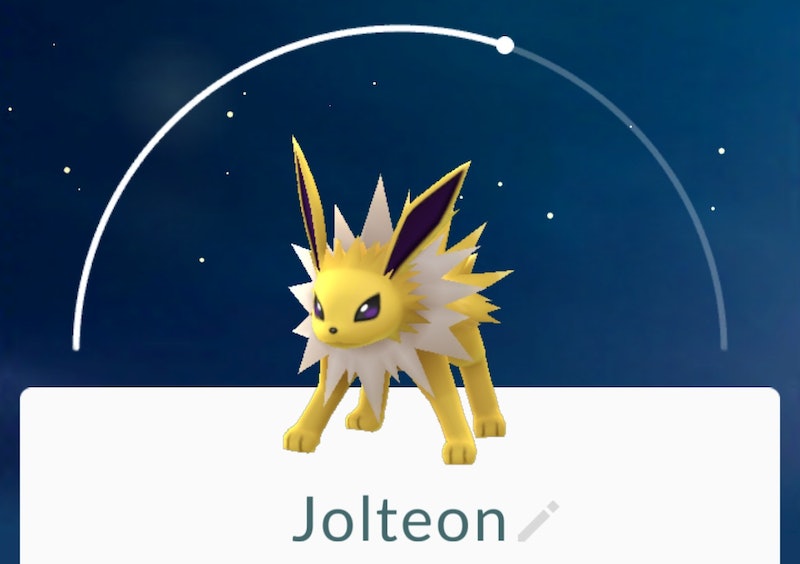 The Pokemon of the moment is without a doubt the mighty Eevee, a tiny, fox-like creature known for its powerful evolutions. So, hey, if you’ve been wondering how to evolve an Eevee into a Jolteon in “Pokemon Go," guess what? I’m about to tell you exactly how to do it. Thanks to that nifty little Easter egg that some crafty folk on the internet uncovered shortly after the augmented reality game’s initial release — and which was later confirmed by Niantic CEO John Hanke during the “Pokemon Go” panel at San Diego Comic-Con — adding a Jolteon to your collection is actually quite simple.

One thing to note: If you’re going to evolve your Eevee into a Jolteon, you’re probably not going to do it for the purposes of winning battles. Vaporeon is generally acknowledged as the best pick to defend gyms, thanks to its hefty stamina stats and powerful “water gun” attack; Flareon is next in line, with weaker stamina, but slightly stronger attack and defense scores; but Jolteon? Poor ol’ Jolteon lags pretty far behind in all categories. As such, it’s likely that you’ll only want to evolve an Eevee into one after you’ve gotten the other two, and solely for the purposes of completing your collection. (I mean, catching ‘em all is kind of the point, right?)

But hey, there’s nothing wrong with that. Even if your Jolteon doesn’t see much action at the gym, I’m sure it’ll still make a delightful little imaginary pet. Here’s how to get one once you’ve caught yourself an Eevee.

1. Open Up Your Eevee’s Profile Screen

From the map screen, tap the Pokeball; then tap “Pokemon”; then select your Eevee. (You don’t need me to tell you this anymore, do you?)

Since the default name for all Pokemon is just the species name, you’ll be tapping the word “Eevee.” It should be sitting just underneath the little animated avatar of the Eevee at the top of the screen.

Without the quotation marks, of course. Then tap “OK” to go back to the Eevee’s profile screen; when you get there, it’ll look like the picture seen here.

Once you’ve amassed enough Eevee candies, evolve Sparky as usual. The result will be — ta-da! — a Jolteon. Congratulations, proud Pokeparent!

More like this
Ashamed Of Your Screen Time Stats? Here's How To Change That
By Alexis Morillo
24 Funny Valentine’s Day Captions To Use No Matter Your Relationship Status
By Jessica Booth
11 Super Bowl Instagram Captions To Use On Game Day — Even If You Don’t Like Sports
By Alexis Morillo
Everything You Need To Know About The Samsung Galaxy S23 Ultra’s New Camera
By Alexis Morillo
Get Even More From Bustle — Sign Up For The Newsletter
From hair trends to relationship advice, our daily newsletter has everything you need to sound like a person who’s on TikTok, even if you aren’t.