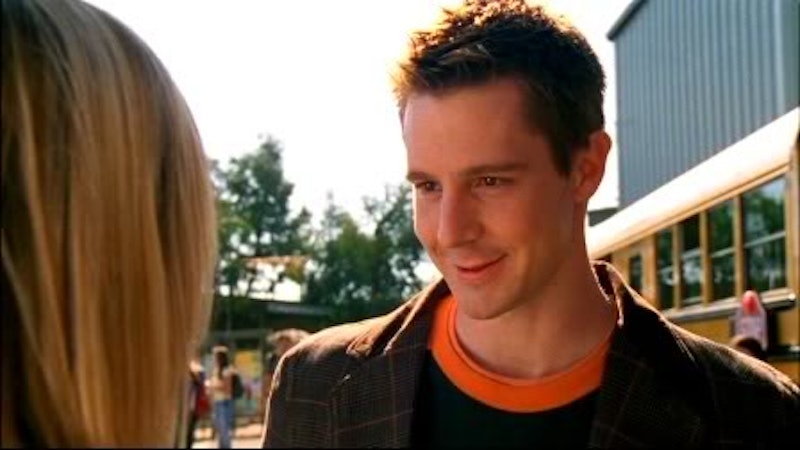 Logan Echolls: Veronica Mars heartthrob, psychotic jackass... master class comedian? While there’s no dearth of snark in Veronica Mars , you really have to give it up to the super sleuths on-again, off-again boyfriend when it comes to quotes that make you laugh. Granted, Veronica and Logan have a passionate but disturbingly dangerous romance that doesn’t translate so seamlessly in real life. But hell, I do love a man that can make me giggle.

But, while there’s so much joy in delivering the perfect one-liners, it’s great getting some context on where exactly Logan is spinning his wit. Thusly, I’ve collected a slew of hilarious exchanges between Logan and the inhabitants of Neptune. Naturally, Veronica is the only one who's ever properly armed when it comes to a battle of wits, but Logan is luckily just as hilarious when he’s trying to riff on someone’s stupidity. And I’m guessing that’s something that he’s more accustomed to, being best friends with Dick Casablancas and all.

But I digress. Since it’ll be a long time coming before we get another Veronica Mars sequel, enjoy these amazing Logan Echolls quotes that show the bad boy’s silly side. Because, hell, his romance with Veronica isn’t the only epic thing about him... that sense of humor is next-level.

1. When It Looked Like He And Veronica Were In For An Unpleasant Conversation

Logan: Oh, this is gonna be good. Veronica: What?Logan: Ah, you have that "I'd rather be making out with a broken bottle" look. Which if history serves, means you're about to say something awkward.

Well, at least they're making light of the uncomfortable exchange.

2. When He Tried To Shut Gia Goodman Up... With Little Success

Gia: The demolition ceremony's gonna be fun. Are you nervous? What if you push the plunger and nothing happens?Logan Echolls: You mean, like, if there were total silence? Let's try to imagine it.

Sadly it took more than snark and shade to slam shut that motormouth for good (um, R.I.P.)

3. When He Showcased His Familiarity With A Dictionary

Principal Clemmons: Mr. Echolls, can I have a word?Logan: Anthropomorphic. All yours, big boy.

Looks like someone's going to slay on their SATs.

4. When Weevil Proposed They Join Forces And Logan Was A Dash Skeptic

Weevil: We have something in common now. We both need to find out who killed Felix.Logan: So what, we team up? Get matching capes, I ride shotgun in a sidecar?

For the record, I would watch this spin-off.

5. And When We Had To Wonder If Logan Wass More Of A Baby Houseman Or A Johnny Castle

Veronica: Dance with me.Logan: Oh, god. You know, when I dreamed of this moment, "I've Had the Time of My Life" was always playing. Oh, what can you do?

Now if only he took this moment to do a running jump into Veronica's arms.

6. When Any Amount Of Time With Parker Was Enough

Parker: Logan, can we, like, borrow you?Logan: Will I be returned in my current pristine condition?

I don't 'ship it either.

7. And When His Blonde Fangirls Converged Without His Knowledge

Logan: How did you know about my trip?Veronica: Parker mentioned it.Logan: Did my fan club meet today? I thought you guys only met on Wednesdays.

Don't be ridiculous, Logan, it's the second Tuesday of every month.

8. When He Tried To Coin A Cute Pet Name For Our Girl

For the record, "Bobcat" also didn't make the cut.

9. When This Sexiness Occurred

Veronica: I just want to get to a place with you where we can be really... intimate.Logan: That's what the female praying mantis says before she bites the male's head off.

I'm very glad none of their bathroom make-out sessions ended like this.

10. When He Celebrated Being A Free Man

Veronica: Let me guess, you're out on good behavior?Logan: You all know my girl, Veronica. I have your picture hung in my cell. Gets me through the long, lonely nights. I lend it to my buddy, Horshack, sometimes. Hope you don't mind.

I don't even have anything to add to this.

11. And, Finally, When He Addressed What We've All Been Suffering From

Veronica: I'm a little punchy. I haven't been sleeping.Logan: Thoughts of me? Hey, I get it. Sometimes I'm up all night, just thinkin' about myself.

Sigh. Who doesn't? Logan may be rude, violent, and a loose canon who routinely explodes all over Neptune... but he sure has a swoon-worthy and laugh-inducing way with words.