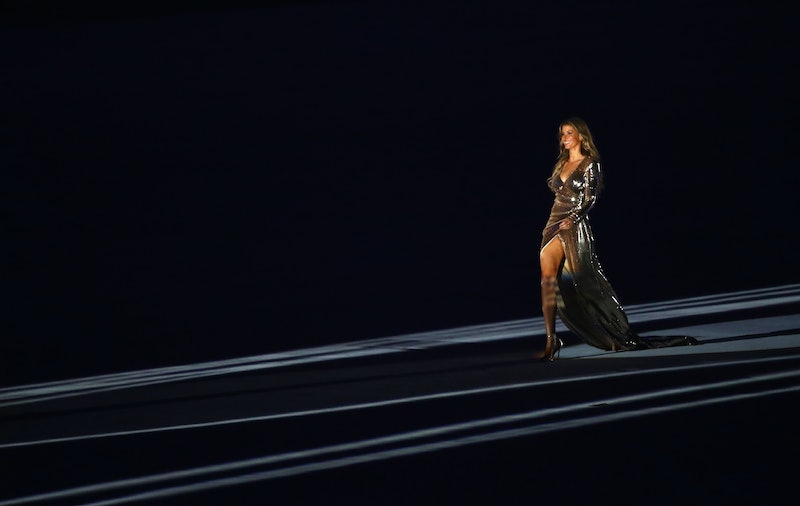 Let's take a moment to step back in time to about a month ago, when Taylor Swift was still America's golden girl. Among her many beautiful quirks that we all loved to playfully tease her about was the fact that she had a habit of dancing like a dork at award shows. Well, as Swift's star has begun to fall, may I now suggest a new one to take her place: Gisele Bundchen's dancing at the Rio Olympics would make the 1989 singer proud. In fact, I imagine that, if Swift were there rather than hanging out with Tom Hiddleston and Karlie Kloss and removing herself from narratives, then she and Bundchen would be flailing and squealing and having such a good time that we'd all wish they we were with them.

NBC was the network to be watching if you wanted to get an eye full of this gloriousness, because they were as in love with Bundchen in the audience of the Olympics as we are. In fact, maybe even more so, because you can find an abundance of pictures and gifs of the dance routine online thanks to them. If you've somehow missed it, well, glance at literally any Twitter. I promise you, it's there.

You have no idea how to truly enjoy an opening ceremony until you see Bundchen (and the man next to her) enjoying an opening ceremony. Which, you know, makes perfect sense. Her skit may have been cut, but that doesn't mean that she didn't come out here to have a good time. And the world is that much brighter because of it.

She might not exactly be Swift, but, hey, she's close enough, and without all that messy controversy surrounding the pop star herself right now. It's a win/win situation for all involved.