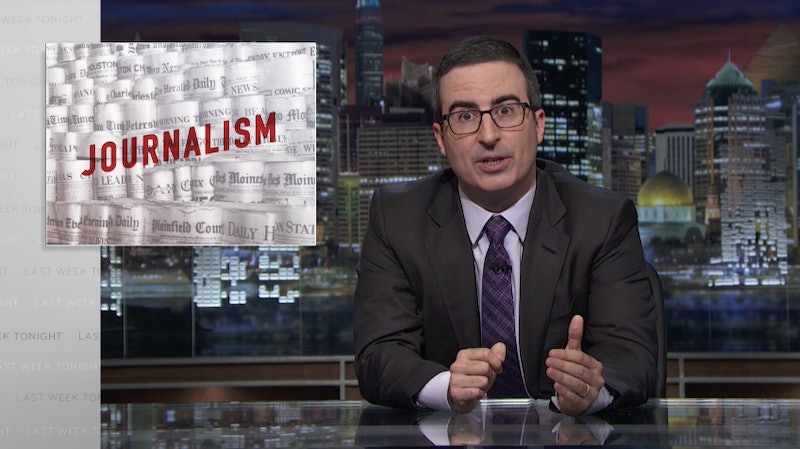 HBO's Last Week Tonight never fails to explore timely, important topics. John Oliver's journalism segment will make you want to read newspapers again, which is something you probably wouldn't expect to hear in 2016.

By now, it's no secret that digital media has largely replaced daily print newspapers. The journalism landscape has shifted dramatically, and many news outlets now start as (or are changing to be) digital-first. This has inevitably changed content coming from publications, as many have to focus on what readers want (which is sometimes puppies and cute animals, as Oliver pointed out) in order to secure advertising, which generates revenue.

Between 2004 and 2014, newspapers lost $30 billion in print ad revenue, which led to the crisis that we all know, in which papers began laying off employees and shifting their focus to digital media. But during that same time period, newspapers gained $2 billion in online ad revenue. This might seem like a positive thing, but online ad revenues are much smaller than print, and when compared to the drastic decline in print ad sales, "It's like finding a lucky penny on the sidewalk the same day that your bank account is drained by a 16-year-old Belgian hacker," as Oliver put it.

The majority of Oliver's segment focuses on this differences between print and online ad revenue, and how this has affected publications. But more than that, Oliver spent most of his time taking down digital media and calling out how confusing their "digital first" plans can be, especially coming from outlets which started in print. "The truth is, publishers are desperate. No one seems to have a perfect plan to keep newspapers afloat," Oliver argued.

Whether a billionaire buys a print newspaper and spearheads its digital strategy (as Amazon's Jeff Bezos did with The Washington Post) or traditional print journalists try to figure out how to make their publications exist and thrive online, the process has not been easy. Moreover, this focus on moving almost solely to digital media is perhaps not the best idea, Oliver argued, saying that "the media is a food chain that would fall apart without local newspapers."

Oliver made valid arguments in his video, which you can watch above, but that doesn't mean that there's no hope for digital media. With the changing landscape of journalism, it doesn't seem like we will ever return to focusing largely on print newspapers again. However, Oliver's argument might make you rethink clicking on articles all day instead of picking up a print newspaper every now and then.