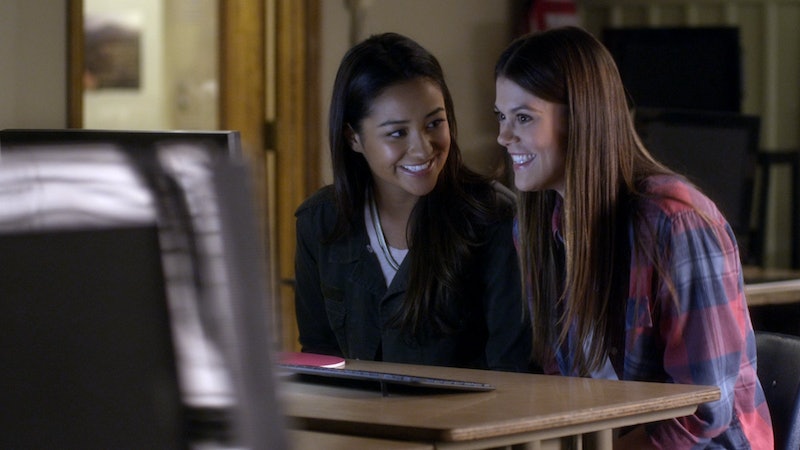 If there's one Liar whose love life is about to get a whole lot more complicated, it's Emily. After spending half a season without any real love interest, Emily ushered in Season 7 with a brand-new potential girlfriend. Emily has been getting cozy with Brew barista Sabrina, and though that hasn't stopped her from having meaningful chats with Alison, it definitely seems like Emily has met someone she could get serious with. Unfortunately for fans who are already shipping Emily and Sabrina, that romance may come to a screeching halt: according to new Pretty Little Liars spoilers, Emily's relationship with her ex might mess things up. According to the synopsis for PLL episode "The Wrath of Kahn," Paige's return to Rosewood could mess things up with Sabrina. Will Emily choose Paige over her new love?

We already know that Paige will return to Rosewood for a job interview in the Aug. 16 episode "Exes And OMGs," but it won't be her only appearance. According to the synopsis for the Aug. 23 episode "The Wrath Of Kahn," Emily's relationship could hit a snag because of her past with Paige. Here's what the synopsis from Freeform says in regards to the pair formerly known as Paily:

Emily unexpectedly turns to Paige for comfort in her time of need, which causes tension in her other relationships.

Though there are a few people who might not be thrilled about Paige's return (Alison certainly comes to mind, as Paige sold her out to the cops back in Season 5) the person who will likely be the most mad is Emily's current lady, Sabrina. Sure, Sabrina and Emily aren't totally official yet, but they're clearly smitten with one another — so much so that they spent an entire night staying up late and talking.

I don't know what Sabrina's opinion on being friends with an ex is, but I do know that no one would be thrilled about their current girlfriend turning to their ex-girlfriend for comfort when they're readily available to talk. Sure, Emily and Paige have a past they can't ignore, but these two spending too much time together might mess up Emily and Sabrina's future.