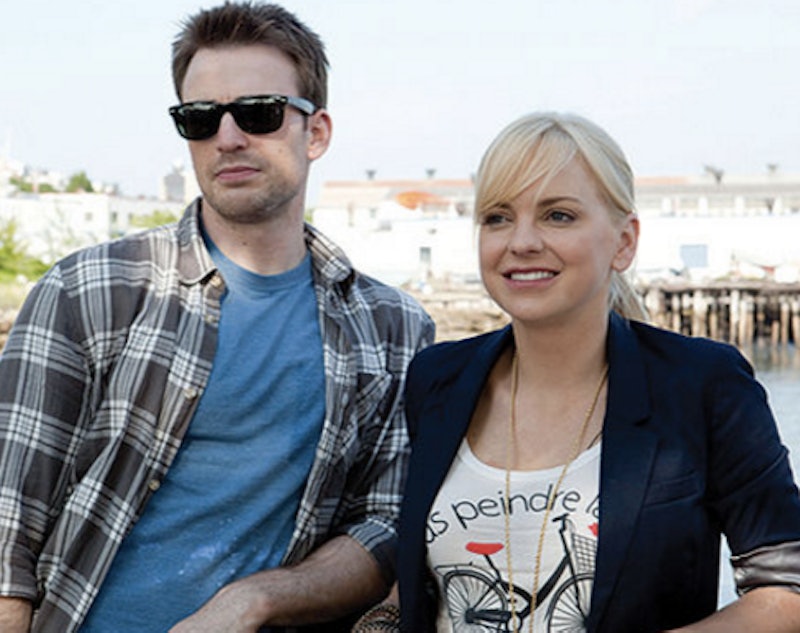 Summer might be a great time at the movies for people that love blockbusters and superhero films, but, for romantic comedy fans like me, it can feel a little sparse. Which is why it's important to have an extensive collections of rom-coms at home just in case you're feeling a little overloaded with 3D comic-book adaptations or science fiction sequels (not that there's anything wrong with either). If you're in need of the perfect summer movie pick-me-up, then look no further — you absolutely have to re-watch What's Your Number? starring Anna Faris and Chris Evans immediately. Captain America himself is in this movie, so how can you not watch it?

Released in 2011, What's Your Number? is often forgotten or missed off of top rom-com lists, but there are several reasons you should move it to the top of your queue right now. Not only is Chris Evans in it looking totally dreamy and wearing very little in the way of clothing, but Anna Faris's real life husband, Chris Pratt, also appears and is as hilarious as ever. Faris never fails to be adorable, sexy, and laugh out loud funny, and What's Your Number? provides her with the leading role she so deserves. But that's far from the only reason that What's Your Number? the perfect summer rom-com.

Firstly, the talent in this movie is undeniable. As the plot dictates, Faris's character Ally Darling decides to track down the 20 men she's slept with, in the hopes that one of them will be The One. That means that there are at least 20 eligible, funny, famous men in this movie, including Andy Samberg and Anthony Mackie. To top it off, Evans plays Colin, Ally's next door neighbor, who helps her find all of her exes. The two forge a close friendship in the process, and Colin sits around Ally's flat playing guitar in his underwear. This movie really has something for everyone.

Aside from all of the handsomeness, What's Your Number? has a feminist message. While I don't approve of the shame Ally feels, and the judgement she gets from her friends when they find out she's slept with 20 people, it's important that a rom-com exists featuring a lead character who's in control of her sexuality. Like any normal woman, Ally has dated, had fun, made mistakes, and never stopped looking for love. And, as the movie progresses, it becomes clear that Ally will stand up for herself, especially when any member of the opposite sex tries to shame her for her sexuality or choices. That's a strong message that was underappreciated in its time.

Above all, What's You Number? is a fierce and funny movie that isn't afraid to be crass. Faris is an amazing comedian, particularly when it comes to physical comedy, and it's great to see Evans in a comedic and romantic role. While it's not his only rom-com performance (see also The Nanny Diaries and Before We Go ), he seems to have a lot of fun in the role, especially embracing his character's need to show off his extremely toned body. No one's complaining about that.

I recommend giving What's Your Number? another look. It may be equal parts crude and schmaltzy, but there's a lot to love about it, and it's the perfect antidote to the dark and serious blockbusters that have filled up movie theaters this summer.