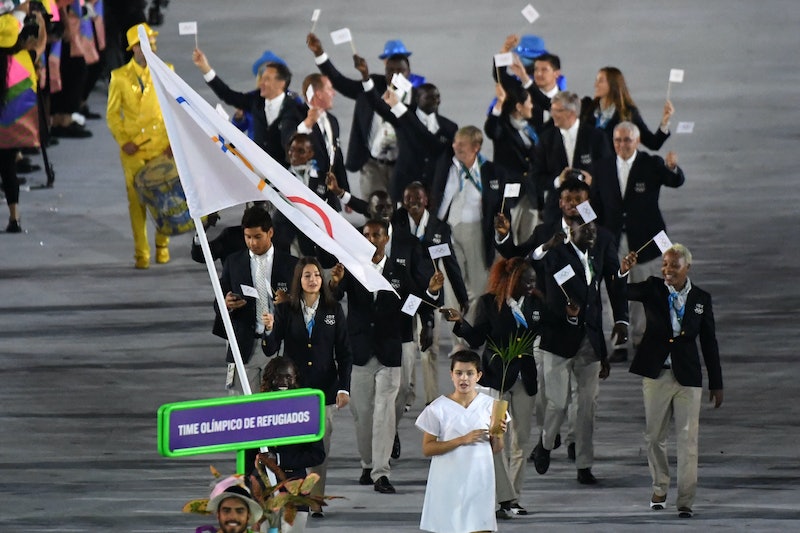 With the 2016 Olympics underway, history is being made in Rio — and nope, not just in terms of new records being set. Instead, for the first time ever, there is a team of refugees participating in the Olympics. Team Refugee's motto is "bravery beyond borders" and there couldn't be a more fitting description for the group. Celebrities are joining forces on Facebook and other social media platforms to throw their support behind #TeamRefugees — even President Barack Obama applauded their success.

Last week, International Olympic Committee President Thomas Bach explained the purpose behind the team. He said at a team announcement in June,

"These refugee athletes will show the world that despite the unimaginable tragedies that they have faced, anyone can contribute to society through their talent, skills and strength of the human spirit."

Comprised of 10 athletes, the group hails from countries including Syria, the Democratic Republic of the Congo, Ethiopia, and South Sudan. In competing, they are showing the world that home is where you make it. They also shed light on the ongoing refugee crisis.

Here's a round-up of celebs who are showing their support for #TeamRefugees — which may, in turn, inspire you to use the hashtag and cheer them on too.

The actor and director emphasized how the team is "spreading messages of love and hope" for refugees across the world. I'd add that not just refugees, but all people can be inspired by their stories.

Activist and Nobel Peace Prize winner Malala Yousafzai shared a message that really resonates. In a message posted on Facebook to Team Refugee, she wrote, "You are the world's team. We stand with you."

Although he didn't add much personal commentary, the singer shared what's at the heart of the refugees' Olympic competition. As he puts it, they can help build a "better future for all 65 million refugees and migrants globally."

The actor wrote on Facebook that he's amazed by the Refugee Olympic Team and encourages his fans to join in supporting the group.

Hopefully more people speak up and rally behind the team. They may not have a specific home country, but that doesn't mean they can't have a strong fanbase from all over the world.

Michaels shared the video above on Facebook. The fitness guru wrote, "I’m amazed by the Refugee Olympic Team making history at Rio 2016. Go ‪#‎TeamRefugees‬! Please JOIN ME by standing ‪#‎WithRefugees‬ and signing/sharing this UNHCR, the UN Refugee Agency petition today."

The Prison Break actor shared a video about Team Refugee, as well as typing up their mission. In doing so, he's spreading the word to his 1.2 million Facebook fans.

The "Raise Your Glass" singer shared a graphic to show she's supporting the team in all of their Olympic endeavors. A simple image, but strong message.

The Academy Award-winning actor explained why he believes the refugees deserve all of our support. He wrote, "What a wonderful example of bravery, resilience and sheer hope & determination in the face of adversity."

Richard-Ross is a four-time U.S. gold medalist in track and field. She may be competing for a different team, but she wrote a powerful note of support on Instagram. She said that when she saw Team Refugee enter the stadium she was "reminded of what these Games are really all about."

The actor and activist pointed out that it's "against all odds" that these athletes are competing. And really, what better reason to support them?

Perhaps the most random on the list, but undeniably important. By having Grover break down the story of Team Refugees, he helps explain the significance to a younger and impressionable audience.

Hopefully this is just the start of celebs lending their voices to support this team, especially since it's such an inspiring group.