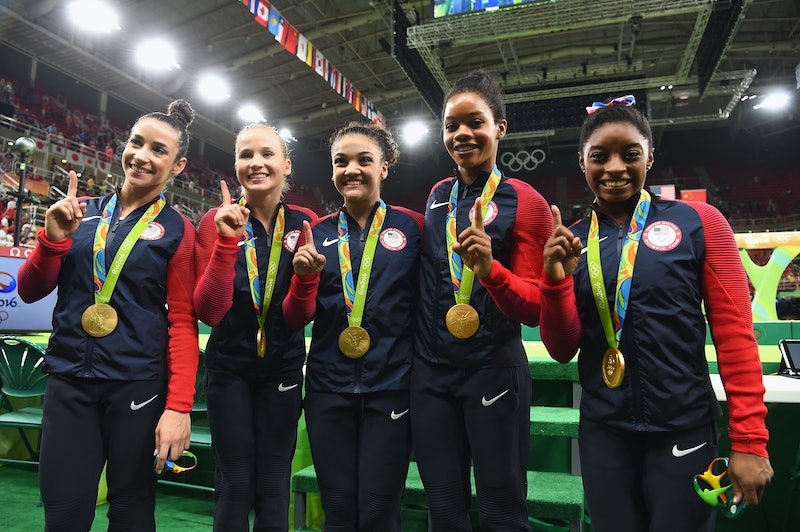 The USA women's gymnastics team is on a roll. The "Final Five" team snagged the gold medal for the team competition on Tuesday, and the superb group made history by beating second-place Russia by eight points — a breathtaking margin in a sport where most competitions are decided by less than a point. What's even more remarkable is that the gymnasts — Aly Raisman, Gabrielle Douglas, Simone Biles, Madison Kocian, and Laurie Hernandez — won every event during the team finals.

The Final Five are undoubtedly the best gymnasts in the world — and they're the most diverse team America's ever seen. Biles and Douglas are African American, and at the 2012 London Olympics Douglas became the first African American gymnast to win the individual all-around gold. Laurie Hernandez is the second Latina, and the first American-born, to compete on the USA gymnastics team since 1984.

"I don't see it as pressure at all," Hernandez told USA Gymnastics. "I see it as such an honor to just, you know, in some sort of way, represent Puerto Rico and Hispanics and all the girls out there. You know what, I don't think that being Hispanic, being black, being white, anything, I don't think that limits you to anything. So, I think that everyone should just go for what they want."

According to TeamUSA.org, they're also a part of America's most diverse Olympics delegation ever. There are 554 athletes representing America in Rio, and 292 of them are women — which is only the second time in history that Team USA has had more female than male athletes (the first time was in London, at the 2012 Olympics). It's a moment of pride for America as it should be.

I've never been a competitive athlete, and watching the Olympics never particularly appealed to me. While I always kept up with medal counts — and chanted "USA" as needed — the Games didn't seem tailored to me. Based on the Olympics even 20 years ago, Americans seemed white, male, and completely uninterested in diversifying. I didn't become invested in the Olympics until 2012, when Douglas burst on the scene and forever altered the course of gymnastics.

Douglas is Black girl magic personified — and I felt it through the television screen in 2012. My palms sweated and my heart raced as I watch her tumble through the air as effortlessly as many of us breathe. "The Flying Squirrel" dominated the competition, leaving with two gold medals and a cemented greatness that far surpasses her petite frame. That's the primary reason I've closely followed the Rio Olympics.

The overall delegation — and the gymnastics team in particular — also prove an important point: Women, especially women of color, have always had the ability to compete on the global level. Privilege and access, not lack of talent, has made it more difficult for Black and Latina women to make their splash in predominantly-white sports like gymnastics, and swimming — the one sport I vigorously participated in.

I learned to swim at age 5. My parents, who never learned to navigate water, gave my brother and I every tool we needed to do so, enrolling us in summer programs that valued and taught swimming classes. We spent every weekend at our area pool, where I practiced until I could shed the flotation vest at the end of the pool where my small feet couldn't touch the elusive bottom.

The memory of my tiny body floating across the pool on my back still elicits chuckles from my mother.

I felt free in water, which is why I joined the competitive swim team at my local Boys & Girls Club. Each week, I donned a swimsuit and learned the ins and outs of breaststrokes, backstrokes, and diving. I never placed in meets, but I knew it felt weird to be the only Black girl on the swimming team. Somehow, the Black girls I knew didn't swim as much as I did because many lived in neighborhoods where swimming pools weren't readily accessible.

This isn't accidental, as history professor Jeff Wiltse explained in his landmark book, Contested Waters: A Social History of Swimming Pools in America. The segregation of pools throughout the 1920s and 1930s ensured that African-Americans didn't have access to pools in the ways that white Americans did.

"There has always been fear, in terms of using swimming pools, about being exposed to the dirt and the disease of other swimmers," Wiltse told NPR in 2015. "And back during the 1920s and 1930s, and... continuing on even further up from there, there were racist assumptions that Black Americans were dirtier than whites, that they were more likely to be infected by communicable diseases."

So, it's no surprise that swimming has been a white sport since it became an Olympic event in 1896. In fact, the 2016 Rio Olympics is the first time two Black women have simultaneously been on the USA swimming team.

It's a similar situation in other sports. Gymnastics is more inclusive than its ever been, but the sport hasn't always been so welcoming. The USA women's gymnastics team didn't even include Black women until 1992, when Dominique Dawes and Betty Okino shattered records. During the 1996 Atlanta Olympics, Dawes became the first Black woman to win an individual Olympic medal for gymnastics when she won bronze for her floor routine. Douglas continued this legacy in 2012, when she became the first Black gymnast to win the individual all-around gold medal.

This isn't coincidental: A 2007 USA Gymnastics study found that the amateur level of the sport is dominated by white children. The researchers discovered that 74 percent of all gymnasts competing on the amateur level are white. Of the 18,000 gymnasts surveyed, only about six percent were African-American and about three percent were Latino. A large part of this disparity is the expensive price tag associated with gymnastics. The parents of Olympians have to foot the bill for classes, coaching, equipment, and traveling to meets — until a corporate sponsor, like Nike, picks up the slack. Forbes found that it costs $15,000 per year for a gymnast to compete on an elite level. This could build up to $120,000 in the course of a career.

This can take a devastating toll on Olympic families. For example, Douglas' mom had to file Chapter 13 bankruptcy before the 2012 games, according to USA Today. She had over $80,000 in debt, some of which came from financing her daughter's gymnastics career. This is a common experience and creates both a class and racial divide within sports, like gymnastics.

When Black and Latino athletes are given few opportunities to climb into the upper echelon of a sport, it signals exclusivity. Historically white sports don't integrate without attempting to attack and degrade those entering with natural talent and skill, like Biles.

Simone Biles is the best gymnast in the world. The 19-year-old has won the most gold medals in world titles history. She's even minted "The Biles," a signature move that other competitors have been unable to replicate. Yet her growing dominance in the sport, seen through the fact that she's currently leading every event she's competed in at the Rio Olympics, has often been met with hostility. In 2013, Italian Gymnastics Federation spokesman David Ciaralli claimed that Biles and other Black athletes dominate sports because they're more "powerful" than the "more artistic" and "elegant" white athletes.

Though Ciarilli apologized, this rhetoric is familiar. It has been used to degrade the accomplishments of other Black athletes, like Serena Williams and Tiger Woods.

"The use of 'powerful' in gymnastics is similar to how certain code words are used for African-American athletes in other sports," Dvora Meyers explained in a post on Deadspin. "White players, since they're not considered innately physically gifted, are talked about in terms of their mental capabilities and hard work—they have 'grit,' they 'hustle,' they're 'scrappy'."

Questioning Biles' natural ability and work ethic is a way to undermine what she's accomplished — and proves how far sports culture has to go to be inclusive. However, watching Black women magically move through the air has been an experience I'll forever cherish, because it shows that we're capable. We've always been able to achieve this level of greatness.

There is no greater feeling than seeing other Black women succeed. I am nobody's Olympian; I can barely bounce a basketball without feeling uncoordinated and clumsy. Yet, this moment — where there are Black women on Olympic tennis, swimming, gymnastics, and fencing teams — fills me with great pride, because it shows that we're capable of overcoming any obstacle placed before us. Whether it's racism, sexism, lack of access, or even the high price-tag to be in an elite sport, we push through and then we dominate.

It's now time for the world to see that greatness in primetime.