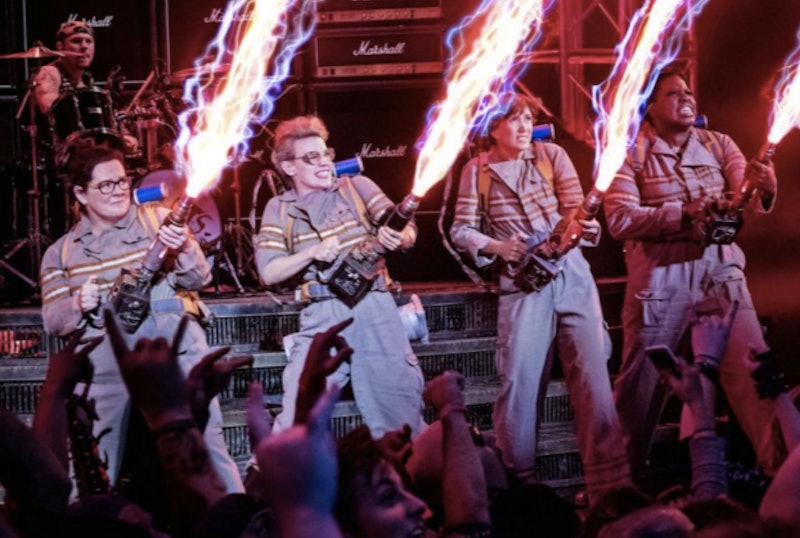 Ghostbusters is the perfect summer movie as far as I'm concerned. Not only does it have a killer cast, featuring several of the funniest people in comedy, but it pays homage to the original movies while also cementing its own style. The movie's leads — Leslie Jones, Kate McKinnon, Kristen Wiig, and Melissa McCarthy — helped to create such perfect characters for the reboot, and contributed to a movie that is the epitome of feminism in so many way. Ghostbusters is most exciting because its four leads consist of incredibly strong women, some of whom are scientists, all of whom aren't afraid of anything. They're great role models for audiences everywhere, which is why a Ghostbusters sequel has to happen.

If you weren't aware, The Hollywood Reporter published a piece Wednesday claiming that a Ghostbusters sequel allegedly might not be as likely as it once looked because of box office earnings.

One word: Noooooo. While these are only rumors at the moment, I seriously hope there's no truth to the claims that there won't be a Ghostbusters sequel, because stopping the franchise now would be a huge mistake.

Despite the majorly sexist online hate campaign riled against them, the stars of the Ghostbusters reboot have remained proud of their work on the movie, and rightly so. Haters aside, Ghostbusters has been updated for millennials, adjusting the plot to fit into modern life — from ghost-sighting uploaded to YouTube to negative comments on the Internet, the latest movie in the franchise understands that technology rules all of our lives — and that we're lost without it.

Most importantly, by instating female leads in the pivotal roles as Ghostbusters, the movie does something unexpected for a big budget Hollywood film. Choosing to make all four of the leads female is a huge deal, and helps address the Hollywood gender imbalance, particularly when it comes to summer blockbusters which generally always star men in the main roles. We need a Ghostbusters sequel for this very reason — the reboot has given four amazing women the platform they deserve, and that's inspiring on so many levels. Seeing female scientists fight ghosts is pretty inspirational stuff, and is capable of having a huge impact on audiences everywhere, especially younger viewers. Knowing that anything is possible, and that women can have any job they choose, is such a brilliant message, it'd be sad for the franchise to end when there's so much left it could explore.

We're still waiting to find out whether a sequel to Ghostbusters will happen, but I'm seriously crossing my fingers for the franchise. There are definitely more stories to tell when it comes to this reboot.