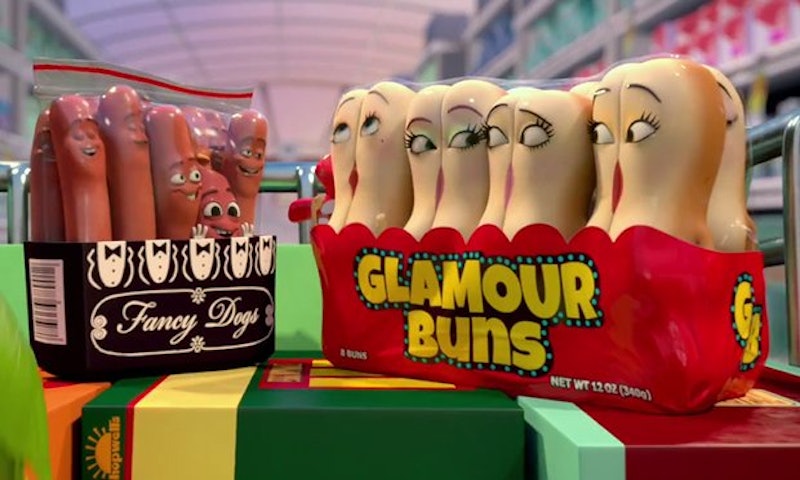 Seth Rogen is no stranger to critically-acclaimed comedies. The comedian has both co-written and starred in such films as Superbad, Pineapple Express, and This Is the End, but his latest effort may be his best accomplishment yet. The raunchy animated film Sausage Party is so far drawing rave reviews, boasting an impressive 86 percent rating on Rotten Tomatoes as of this writing. The movie, billed as an existential comedy, depicts Shopwell's supermarket food discovering the awful truth behind their existence: They're meant to be eaten by humans. But is Shopwell's from Sausage Party real?

The existence of the food's life in the movie may be pointless, but when it comes to the existence of Shopwell's, well, that's a little more complicated. Although I couldn't find any evidence of an actual supermarket named "Shopwell's," there was once a fairly prominent chain of grocery stores called "Shopwell." Shopwell supermarkets operated in the New York City area, with stores located within the five boroughs as well as Long Island, Westchester County, and Connecticut. At its peak, Shopwell consisted of 103 stores in 1962 (some of which went by the name "Daitch"), but by the 1990s, after several store closures, Shopwell stores appear to have gone extinct. However, their legacy still lives on.

Before things turned south for the company, Shopwell made the decision in the late 1970s to focus on converting some of their locations to high-end grocery stores. The name for these new gourmet supermarkets was The Food Emporium, which anyone from New York City will recognize as one of the ritziest grocery store chains around. The brand operates seven locations in the city today, and they specialize in high end (and expensive) food products.

Although the Shopwell's in Sausage Party is fictional, there was indeed once a supermarket chain called Shopwell. Whether Rogen and company were aware of this when they came up with their store is anyone's guess, but I can confidently say that Shopwell's is considerably funnier than Shopwell ever was.