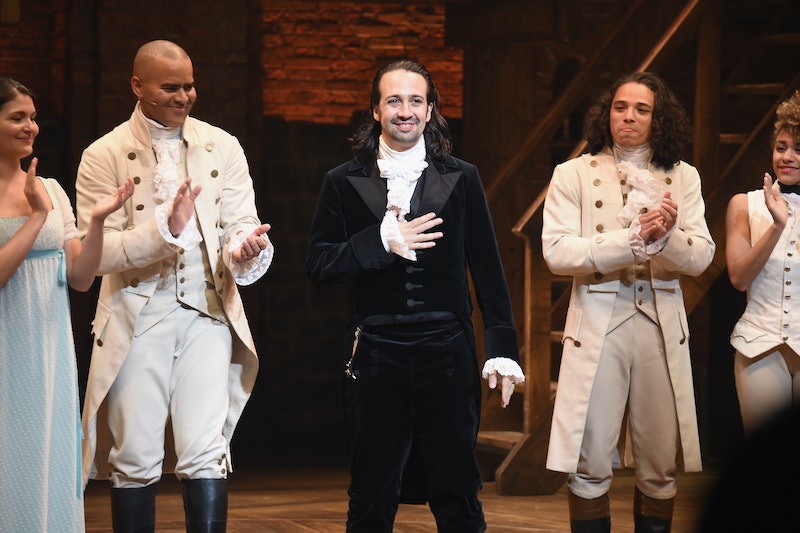 I think it is time to officially declare Lin-Manuel Miranda a national treasure. First the man turned the life of Alexander Hamilton into a masterfully inclusive musical look at history through the eyes of a Founding Father, whose identity as an immigrant was integral to his story. Now Miranda is reinventing Hamilton again, this time for Drunk History, and he has found a new way to make history accessible to everyone. In the Drunk History episode airing November 29, an inebriated Miranda will narrate the story of Alexander Hamilton who will be played onscreen by Alia Shawkat. Hamilton's future dueling partner Aaron Burr will be played by Aubrey Plaza. That's right, Hamilton just got gender-swapped, and oh does it ever feel so good.

History is full of old white dudes — at least history according to most textbooks is, while the contributions of minorities and women are often overlooked. Just because those famous figures were old white men does not mean modern examinations of their stories cannot be adapted in new and fascinating ways. Having Shawkat and Plaza step into the boots of Hamilton and Burr is a stroke of genius. It will instantly add another layer to Hamilton's tale while also continuing to inform viewers about actual history.

For way too long, history has been the "boring" subject. The story of humanity is messy, complicated, and full of fascinating men and women who shaped life as you know it. The only way that's not cool is when history is whitewashed and boiled down to boring facts and figures. Hamilton the musical is an excellent example of how delving deep into the past, being inventive, and focusing on the universality of stories can make the past connect with the present in a meaningful way.

Like Hamilton, Drunk History has found a unique way of teaching while also having a lot of fun. They are a true match made in history lover's heaven. The Hamilton episode gets an automatic thousand cool points for casting the amazing Shawkat and Plaza in the lead roles. It gets even more points for getting Miranda super drunk and then asking him to tell the story of Hamilton.

The episode is sure to have its share of unexpected twists and turns as Miranda descends deeper and deeper into his drunken historical ramblings. Of course, if anyone can keep pace with Miranda it is Shawkat, who told Entertainment Weekly she felt playing Hamilton "was meant to be." In an industry where women's roles are still sadly limited, it is refreshing to see Miranda and Comedy Central smashing the playbook and handing over the role of the most famous Founding Father to an amazing actress like her.

Shawkat and Plaza both relished the opportunity to bring Hamilton and Burr to life for the small screen. Having superb costumes helped both women experience the roles fully. "We were acting different, walking different, interacting with the crew differently," Shawkat told EW. There was something trippy about being dressed like a man all day. It looked kinda cool, kinda hot."

That is how history should feel for everyone: as if you are truly walking in that person's shoes. Miranda, even when he is crazy drunk, is committed to making everyone feel like they are part of history by flipping the script in new and unexpected ways. Tune into Drunk History this fall to see Miranda take Hamilton to even greater heights of progress — and make you laugh your butt off in the process.