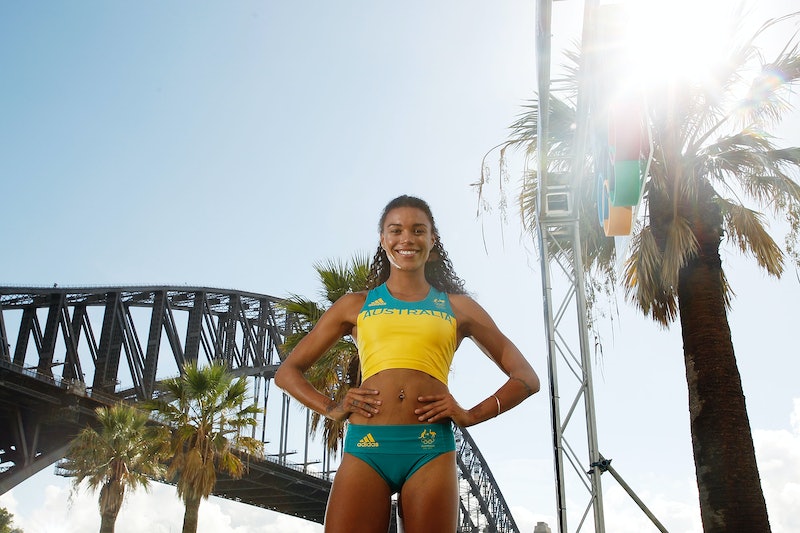 As a former vegan and vegetarian myself, my ears always perk up when I hear of a professional athlete who's also an herbivore. My sport (Olympic weightlifting) was the reason I started eating meat again. As passionate as I was about it, I was constantly wondering what vegan athletes eat, somewhat challenged to find the solution myself. Admittedly, it's not easy for everyone. Like any diet, there's a right way and wrong way of doing it. But sure enough, there are actually quite a few athletes — including a few who've made it to the Olympics — who've not only made a vegan diet work, but even consider it crucial to their success in their sports.

These athletes' lifestyles are nothing short of awe-inspiring. Some of them will say that adhering to a vegan lifestyle is pretty simple for them. It's just another decision you make. But I can vouch for the fact that being vegan isn't necessarily all that easy in a world that largely caters to meat eaters.

Regardless, these remarkable athletes are living proof that you can have an animal-free diet and be not just healthy, but an elite athlete. Here are just a few world-renowned athletes that are also herbivores:

In the summer of 2011, tennis superstar Venus Williams was diagnosed with Sjögrens Syndrome, an autoimmune condition. To better fight this and improve her overall health, Williams began adhering to a vegan and raw food diet.

"I always make a smoothie, so I can get it down," Williams told ABC News. She also talked to Refinery 29 about her pre-game eating habits, sharing, "Before a match, I try to do a combination of carbs and protein so I have sustaining energy. It depends on how I feel — [sometimes] I eat beans and rice. ... This past weekend at Wimbledon, I just wanted to have potatoes. It was weird. I had potatoes [with] salt and pepper before a match, and maybe a banana."

While Venus (and Serena too, actually!) still stands behind a vegan lifestyle, these days, she describes herself as a "cheagan" — a cheating vegan — occasionally enjoying non-vegan food.

Kendrick Farris is the United States' only man competing at the 2016 Games in Olympic weightlifting. If you're not familiar with him, this is actually his third Olympics, and he holds the American record for his weight class. In other words, he's good. He's also vegan — which, I can't stress enough, is more than odd for a weightlifter.

But Farris stresses that you really don't need to be obsessed with meat and protein in order to be strong and healthy. "I like to make a trail mix with almonds, cashews, and pistachios. I drink a lot of water with some lime mixed in. I eat a wide variety of fruit—grapefruit is one of my favorites, and I love blackberries and blueberries," Farris told Men's Fitness when asked about his diet, adding that black beans are his go-to food. "I love avocados," he added. "Those are my favorite. My wife makes avocado 'quesadillas,' which I’m a fan of. And guacamole—I love guacamole." Farris additionally explained that he doesn't even eat on a schedule — he just eats when he's hungry.

Hey, if this guy can be an elite weightlifter with no meat or dairy products, anyone can.

The sprinter from Melbourne is tough to beat. With an unbeaten score in the 400-meter race for the 2016 season, Morgan Mitchell won all 12 races, took the national title, and headed to Rio. She's also 100 percent meat-free. "I have been vegan for a year and a half," she told PETA. "That's really helped with everything: energy, health, the environment." Mitchell still gets plenty to eat to fuel her demanding career.

"I'll wake up, I'll have two pieces of banana with maple syrup, peanut butter on rye bread, and then a smoothie, which will have every vegetable and fruit that you can imagine," she shared. "I'll have a tofu burger and some rice for lunch. And I’ll make something up for dinner: a vegan pizza with vegan cheese or noodles. When you learn to love it, it comes easy." Snacks include chia pods and dates.

Carl Lewis may have retired from the world of competitive track and field, but this 10-time Olympic medalist and 10-time World Championship medalist will never be forgotten. He credits his best performances in 1991 to having changed to a vegan diet; and he remains passionately outspoken about it. He wrote the introduction to Very Vegetarian, a book by Jannequin Bennet, saying, "I’ve found that a person does not need protein from meat to be a successful athlete." So what does Lewis eat?

"I basically shop at the health food store," Lewis shared in an interview posted by YouTube channel Food for Athletes. He addressed the concern that vegetarians and vegans don't get enough protein, explaining, "I eat tons of lentils. Love beans ... I did the things I need to do to replace the things you would get with the tremendous amounts of meat most people eat."

5. And A Shout-Out To Ronda Rousey

Most of us know her as the UFC champ whose bad side you don't want to get on, but there's even more to to Ronda Rousey — largely considered the best female MMA fighter in the world — than that. During her climb to the top, Rousey once followed a strict vegan diet. It happened after she finished the 2008 Olympics, telling USA Today, "As of right now, I am a vegan. I put that off until after this tournament. Being an athlete, you try to get protein."

It wasn't the most successful vegan diet, however. (But hey, A+ for effort.) Rousey was working two (and sometimes three) bartending jobs at the time, therefore severely limiting her opportunities to maintain a healthy vegan diet. Rousey jokingly told MMA Playground that she didn't "have many options in the vegan genre besides Jameson Whiskey and sweet potato fries." Yikes! We give you credit for trying, Rousey.