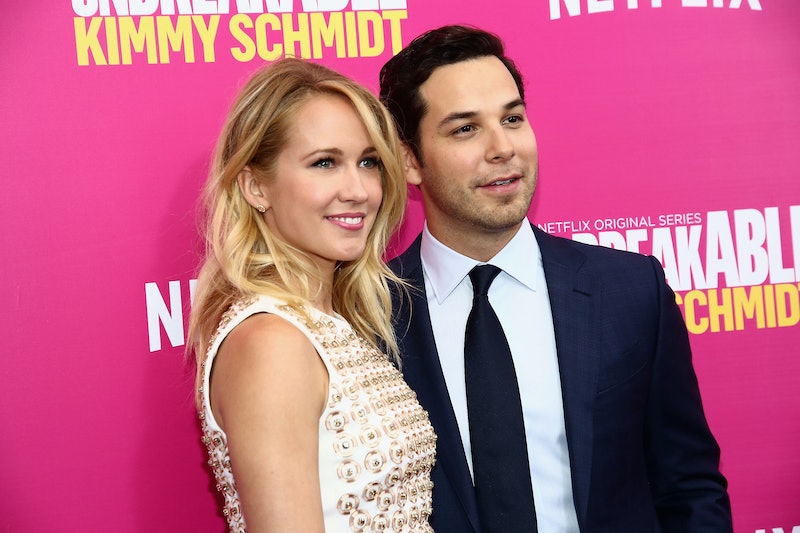 Although diehard fans of Pitch Perfect totally ship Beca and Jesse in the movie, the actors who play them IRL aren't actually a couple. Instead, Skylar Astin (aka Jesse) is engaged to Anna Camp (who played Aubrey). And honestly, their relationship is aca-mazing. Proving that point, Astin and Camp celebrated their bachelor and bachelorette parties over the weekend and it's everything fans could have dreamed of. It also doubled as a mini reunion for the movie's cast, since Brittany Snow was one of the guests.

According to E! News, the bash was country themed. The whole crew — bridesmaids and groomsmen — went line-dancing together. That actually makes me think that'd be an excellent idea for another addition to the Pitch Perfect franchise. The cast could sing a bunch of old country jams and go visit the south. Someone should start writing that script ASAP, please.

These lovebirds got engaged back in January. Not only did Camp start sporting some new bling on her finger, but Astin got his own engagement ring and wrote on Twitter, "It always felt odd to me that men didn't get engagement rings. Thankfully my fiancée thought so too." Since they both did the whole ring thing together, it makes sense that they'd celebrate their bachelor and bachelorette parties equally too.

Here's a recap of those pre-wedding festivities. Just a warning that you may experience some major FOMO.

OK, this is way too adorable. I can't even handle it.

This group of guys looks so serious, you'd think they were about to participate in a Pitch Perfect riff-off.

That crown is perfect for a bride-to-be.

Looks like Brittany Snow is very serious about that bachelorette party. She wrote this note for her movie bestie.

Their characters may be frenemies in the movie, but looks like they couldn't be closer in real life.

The bride-to-be got her groove on, obviously. The cowboy hat is a nice touch.

Here's hoping more of the Pitch Perfect cast joins in for the actual ceremony. And at the reception, they hopefully do some karaoke. You know that'd be a must-see event.