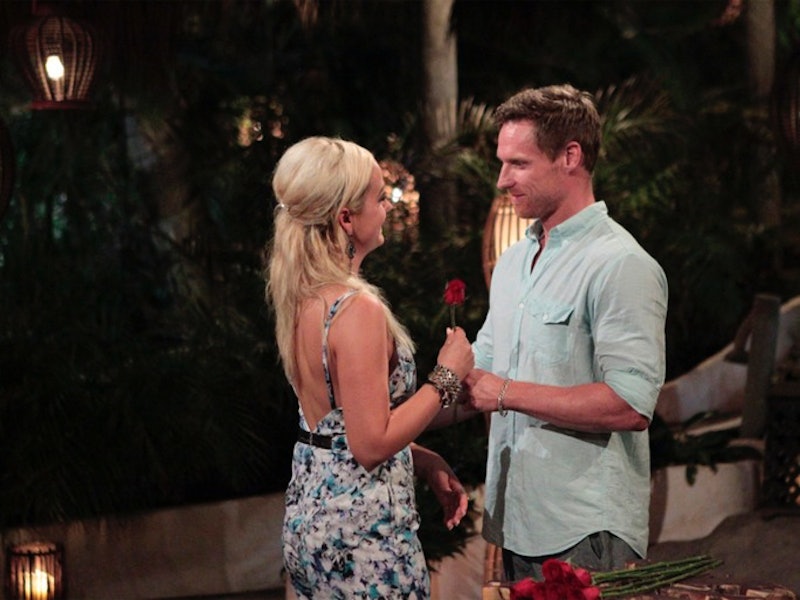 During Bachelor in Paradise Season 2, Jade Tanner and Tanner Tolbert were the faces of true love, while Kirk DeWindt and Carly Waddell became the faces of a dramatic breakup that shocked fans and co-stars. Kirk and Carly had been close since the beginning of that season, so the split seemed to take everyone by surprise — except him. In an interview with Bustle, Kirk DeWindt tells his side of the Bachelor in Paradise breakup with Carly, and he has only sweet things to say about his TV ex. "Carly has a really good heart, and I really just hope she's happy," he says. "That's the honest truth. It's really hard, because we just weren't a good fit. We really weren't — in my eyes, anyway."

After spending the majority of Season 2 together, Kirk confessed to having doubts about the relationship and broke up with Carly in the season finale, which would later inspire her to do a tell-all interview with former Bachelorette Ali Fedotowsky and write a song called "Blindsided: A Song For Kirk."

As for Kirk's side of the break up, he had filmed Bachelor in Paradise for 20 days — which is essentially three weeks — and he had a feeling that this wasn't a relationship that would survive in the real world. "The show puts a lot of pressure in a short amount of time to make a decision about a relationship and I had to listen to my gut on that," the Minneapolis-based personal trainer recalls. "You know, the easy thing to do would've been to end up with her and then break up off camera, but that would've been cowardly of me to do. I had already known toward the end of Paradise that she wasn't right for me. The right thing to do was to not let it go any further."

And, while Carly and fans may have felt blindsided, Kirk says he took precautions with Carly to not get her hopes up. "The one thing I think I was very careful about with her — and she'd probably disagree — I was very careful not to project to the future," he recalls. "I was very careful to make sure I didn't promise her anything I couldn't follow up on."

He only has positive things to say about the relationship and his time with Carly, even though Kirk says they're no longer in contact. "We had a good time together," he says. "We had a really good thing. I just don't think it was the right relationship for me. I really didn't mislead her. I think she was just caught off guard, thinking things were seemingly good. With the pressure of time and what the show creates, it forces you to make a really hard decision."

Fans didn't take kindly to Kirk sparking one of the most dramatic breakups on a Bachelor show, but he is actually understanding of the reaction. "I think the one thing that was unfortunate was that America saw the story from her eyes and not through my eyes," he says. "So of course you'll side and feel for her, which you should, because it was tough. I hurt her and I didn't mean to."

Since then, Carly has returned to Mexico to try for true love again on Season 3 of Bachelor in Paradise, but Kirk says he isn't watching and he's been busy with his personal training business. "I haven't watched single a minute of anything Bachelor-related since my little demise," he says with a laugh. "I'm so out of the loop, you have no idea."

And, maybe that's for the best. It's probably not fun to watch your ex date another man, no matter who ended things.