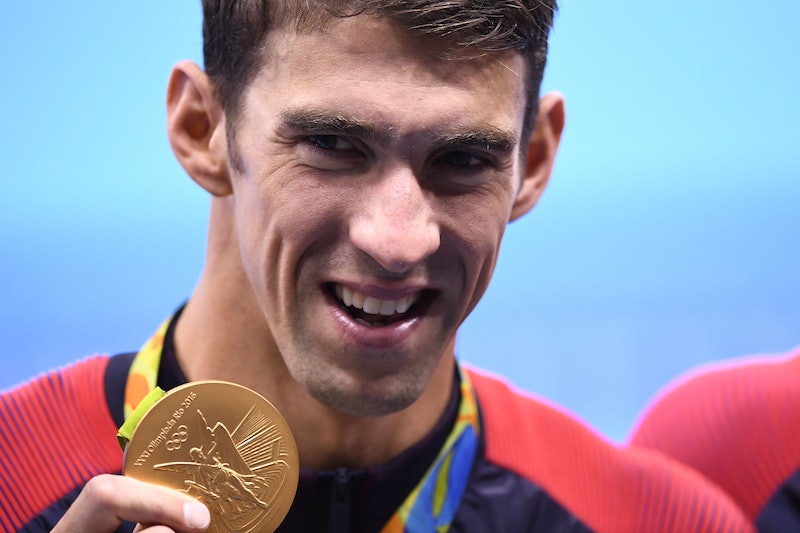 Before you all start panicking about Michael Phelps announcing his retirement and claiming that he won't return for the 2020 Tokyo Olympics, let's all take a breath and try to calm down. Of course it's scary to contemplate going on without this record-shattering swimmer, especially while the Rio Games are still going on. But I don't think there's any reason to start panicking just yet. Sure, Phelps sat down with Matt Lauer and said in no uncertain terms that this is the last we'll see of him in an Olympic context, that he's retiring after these Games, six medals the richer, but surely there isn't cause to give up hope yet, right? No matter how final this statement seems.

"Done, done, done," he said in the interview. "This time I mean it. I wanted to come back and finish my career how I wanted. And this was the cherry on top of the cake that I wanted." All I wanted was a nice, relaxing last few days before the Closing Ceremony on Aug. 21, and Phelps had to blow in here with his announcements and put me on edge when I should be enjoying the last moments of all the sports my body could never physically even begin to attempt. Well that's just fine, Michael Phelps — you make all the grand claims you want about not coming back. However, there are 14 reasons I'm convinced he will anyway.

1. He's Done This Before

Lest we forget, Phelps claimed he was done after the London Games in 2012 as well. Then, he made a surprise comeback for Rio. Fool me once, shame on you. Fool me twice, shame on me.

And I'm not the only one skeptical. Even Phelps' own fellow Team USA member Ryan Lochte is convinced that this is a ruse, telling Today , "I guarantee he will be there. I think so — I really think so. Michael, I'll see you in Tokyo." Pretty strong words from one of the people who knows you best in the world.

3. And Neither Is Lilly King

And Lochte isn't even the only swimmer on Team USA who's got her eye on Phelps. When Lilly King was asked if she believed that Phelps would be able to stay away, the finger-wagging 19-year old told Lauer, "I don't know, we hope not." Give the people what they want, Michael Phelps. Especially when they're your own teammates.

4. He Won't Be Able To Resist Being On The Team With Katie Ledecky Again

With the way Katie Ledecky ate up records this year, at just 19 years old, there's no way she isn't gonna be back and hungrier than ever in 2020. If you get the chance to have her as your teammate and be a part of history like that, I feel like you should take it as many times as it's offered.

5. He'll Want To Protect His Title Of Most-Decorated Olympian Of All Time

For sure, 28 medals is impressive, but you gotta watch the throne, you know? Why not tack on a few more just so you don't have to stress about holding onto the record?

6. He Hasn't Slowed Down Yet

It would be one thing if he was picking up bronzes — so embarrassing, to only be the third best in the world — or failing to medal entirely, but Phelps got five new gold medals this year. He's still hot. It's great to go out on a high note, but what if that high note is still ahead of you?

7. He'll Want To Impress His Son

Little Boomer Phelps was born in May 2016, so he isn't old enough to form a memory of his dad as an Olympic swimmer. But a 4-year old? That's a different story. Imagine Boomer growing up with those images of Phelps splashing away at the 2020 Games in his head? Don't underestimate the power of a child's pride.

8. Four Years Is A Long Time To Think

I'm sure you feel strongly now, Phelps, and no one is trying to question that. But after sitting around on your bum for a while, trying to be a normal person, I think you'll feel the call of the chlorine again.

Anything that Phelps would do with his career would likely be swimming-based, so is he really ready now to set the entire rest of his life toward talking about the sport instead of competing in it?

10. Tokyo Is Supposed To Be Nice That Time Of Year

It's actually supposed to be unbearably hot and humid, if we're being totally transparent with each other, but traveling is so fun.

Granted, that gives him over a decade on the average Olympian, but swimming is a low-impact sport, so athletes have some more wiggle room and can stick with it for longer. Hint hint.

12. Someone Needs To Start The New Trend

Phelps introduced us to cupping in Rio, giving thousands of journalist an angle for their articles. Without him, how are we supposed to know what the up-and-coming treatment is in Tokyo 2020?

There is so much dad joke potential in those Games, are you kidding me? Phelps already has one kid, and will probably have at least one more by then, so I would've thought he'd be jumping at the chance to say lines like, "My eyesight's a little hazy, but my swimming's 2020." Cue sunglasses falling down onto his face from the sky.

All I'm saying is think about it, Phelps. These are all really good reasons, and I didn't even use the one where I need to live vicariously through him from my sofa. Please let me have this, and we'll see you in 2020.