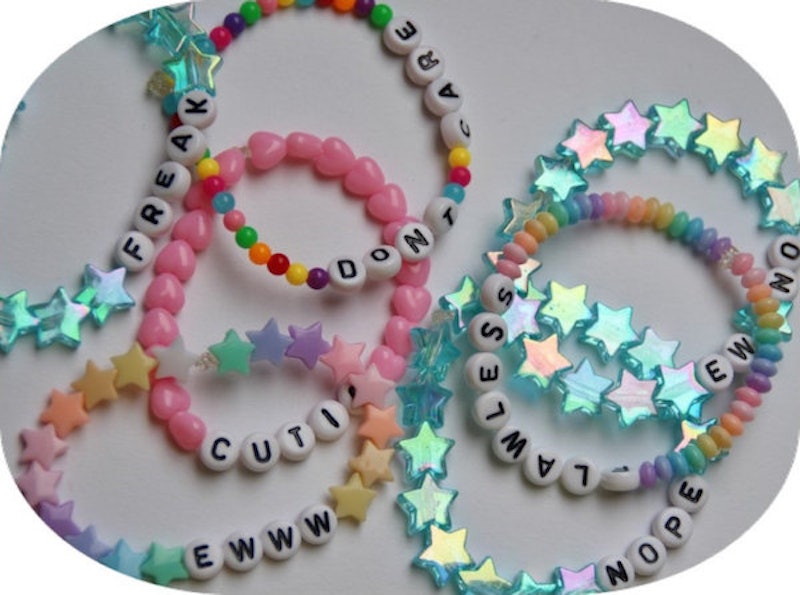 As much as we young Millennials loved our popcorn shirts and jelly sandals in the '90s and early '00s, we knew that accessories were what really made an outfit. Our arm candy was something serious, given the dozens of rad bracelets every young Millennial owned throughout their childhoods. Some of us amped our style with roll-on body glitter or tattoo chokers, but it was our bracelets that transcended cliques and aesthetics alike.

During the days when Claire's, Limited Too, and Hot Topic were the mothership, having the hottest bracelets fastened around our wrists was a must. I don't know about you, but my peers and I rocked at least a dozen colors and styles on the daily. Weighing down my arm by wearing a stack of them at once was the only way my young self could do the bracelet trend right.

I personally don't understand some of the accessories we were obsessed with when the new millennium rolled around. The LiveStrong fad, in particular, still baffles me (mostly because we were totally missing the point). That didn't stop me from joining my peers in rocking the latest bracelet trends to the fullest, though.

Since so many of us GenY-ers are always getting weirdly nostalgic about every little thing, it's only right that we remember the bracelets that defined our youth. These 13 bracelets were definitely complementing my arms at any given moment in the later '90s and early 2000s.

These rubbery, rainbow bands were nothing special, but we went crazy over them as middle schoolers anyway. Jelly bracelets were usually piled on our arms by the dozen. In my school, you were truly a cool kid if you had the clear, colorful ones that sparkled with bursts of glitter. Emo kids usually stuck to the black and red packs, of course. And if you looped two bracelets together into one design, you were really hot stuff.

Rumor still has it that every color corresponded to a sexual act you had previously performed, or would be willing to perform should the band be ripped off. I can guarantee you that this was not the case in my school, but I can't speak for all Millennials.

Friendship bracelets were often the highlight of slumber parties. For the longest time, I could only make them in the basic forward-arrow pattern. That is, until I got one of those Klutz books that showed readers how to make every friendship bracelet style imaginable.

Whether you made your bracelet with your gal pals or you purchased one from Claire's, almost every kid was wearing them. I even used to shower in mine. Throughout my early high school years, my best friend and I still rocked matching friendship bracelets. They were the only thing that could make you and your BFF truly official.

Of all the fun and wacky bracelets we wore back in the day, hemp jewelry was the one to give you super bohemian vibes. You could wear a hemp bracelet that only consisted of twisted rope or one that had beads and stones woven into its design. I wasn't a big fan of these bracelets, but when I did wear one I felt like a total hippie.

To say that my peers and I were obsessed with Silly Bandz in high school would be an understatement. We may have been older teens by the time they got popular in schools, but we loved them just as much as younger children seemed to.

The key was to collect Bandz that no one else had. We often traded one another for rare gems that we desperately wanted but couldn't find so easily. That's how serious the trend got. Animal packs were the most popular, by far, but Silly Bandz came in every possible shape and figure.

Power beads supposedly contained magical healing powers within them. I'm not sure how much I believed this urban legend, but I had a turquoise power bead bracelet that I adored in elementary school. The sound of two of these clacking together on my wrist was like music to my young ears.

Daisy chains were super '90s. We were obsessed with anything floral throughout the entire decade, so it was only right that we rock daisies in our jewelry, too. I yearned to make them myself, but I totally just bought them at Claire's like everyone else did.

What else were you going to pair with a puka necklace? A Puka shell bracelet was the only thing that could complement the necklaces that grew so popular in the '90s. Our inner surfer dudes came out whenever we wore them.

It was nearly impossible to get through a school day without having one confiscated. After all, we were always slapping them on anyone and anything in our sight. Honestly, they were more of a toy than they were a fashion accessory. Too bad slap bracelets have such a dark history that caused them to be banned in many schools nationwide.

If you weren't making friendship bracelets at your slumber party, then it was likely that you were making letter bead bracelets instead. We often spelled our names at the center, but phrases like "cutie," "best friends," and "I love you" were also highly favored. Star and heart-shaped beads usually complemented our letters, but you could use any kind of beads you wanted to make your piece unique.

Looking back on them now, I'm not feeling rope bracelets at all. I don't know what their appeal was, but I definitely wore them nonetheless. Maybe it was the neon color that attracted so many of us to these, because we all know how much '90s kids loved bright colors and patterns.

The LiveStrong bracelet craze was arguably the strangest of all. The bracelets supported a good cause, but it wasn't long before we were wearing them for reasons other than to support cancer research. They quickly became a fashion statement as other rubber bands were produced in all kinds of colors with unique sayings on them. As with Silly Bandz, we usually traded these bracelets and had a dozen of them on at a time.

Because DUH! What would the '90s be without tattoo choker jewelry? If you went all-out with a tattoo set that included a bracelet, you were clearly committed to the trend.

We can thank Avril Lavigne for making studded bracelets a thing in the early 2000s. One couldn't properly do the grunge aesthetic without them. Black was the way to go, of course, but you could also find them in other hues if you searched hard enough. To really set your look on fire, you likely added a matching studded belt to your ensemble and, of course, dad's striped tie.

Many of the bracelet trends we loved as kids were short-lived. But seeing some of the styles we once adored around the wrists of today's youngsters is enough to make any Millennial get a little teary-eyed.

More like this
The 'Kenan & Kel' Reunion On 'SNL' Took A Dramatic Turn, Thanks To Keke Palmer
By Brad Witter
The First Trailer For 'That '90s Show' Includes So Many Nods To The Original Series
By Jack Irvin, Alyssa Lapid and Grace Wehniainen
Rita Ora’s Sheer Dress & Mermaid-Inspired Prosthetics Stun At British Fashion Awards
By Sophie McEvoy
The 12 Trendiest Nail Polish Colors To Wear In 2023
By Olivia Rose Ferreiro
Get Even More From Bustle — Sign Up For The Newsletter