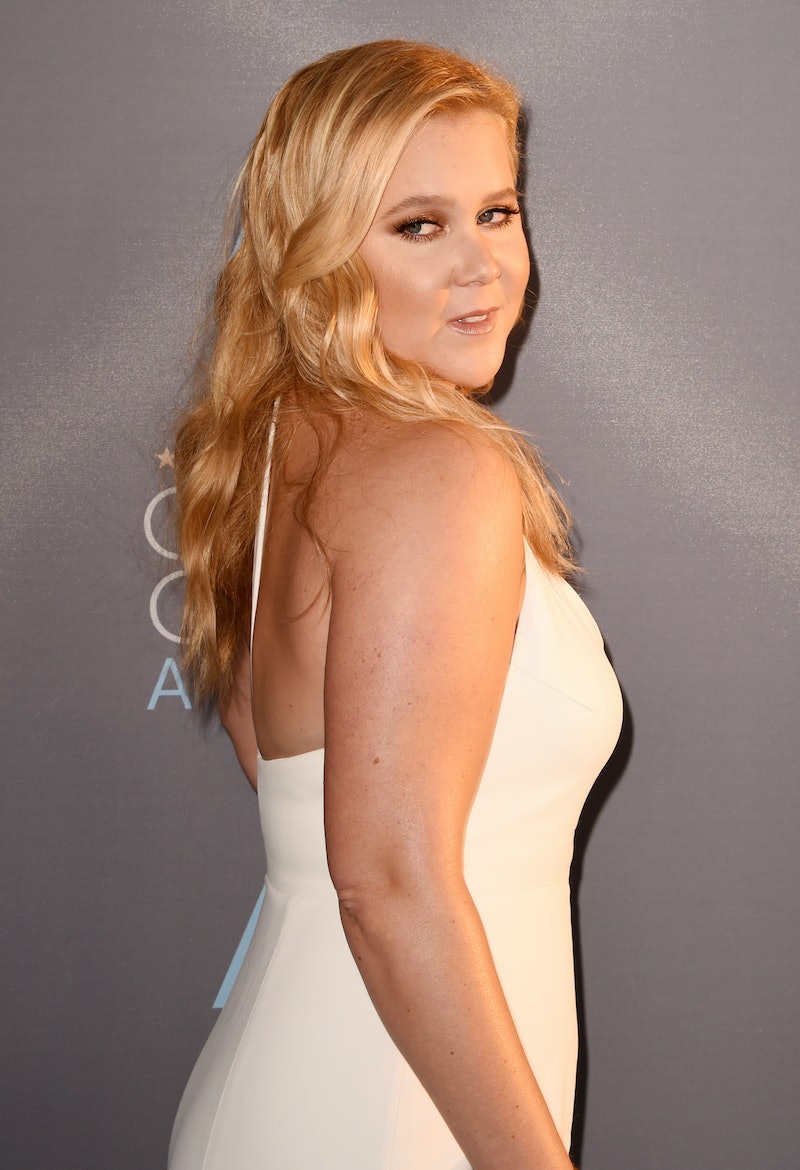 If one of today's legendary actresses is bound to get a movie made on her life, it has to be Meryl Streep. Between her heart-breaking life story and the fact that she currently holds the record for the most Academy Award nominations (with 19 nominations, and three of them being wins), you just know that a Meryl Streep biopic is on it's way sooner or later. If that biopic ends up coming sooner rather than later, there's already an actress Streep has lined up for the part. In an interview with The Huffington Post, Meryl Streep revealed she wants Amy Schumer to play her in her biopic. There was no hesitation in Streep's voice when she quickly answered the casting question with, "Amy Schumer, of course." And, of course, Schumer responded to the news in the same general way you would expect from her fans: "holy sh*t." Let's be real, guys. Schumer is perfect for the role.

I know what you might be thinking: "But Amy Schumer is a comedic actress." Well, believe it or not, comedy would definitely be a key part of taking on Streep's overall, fun-loving personality. Plus, Schumer is so much more than what the public may see on the surface. Between the projects she's done so far, her personal road to fame, and the things she stands for today, she's actually a whole lot more cut out to play Meryl than you might originally think.

Between their cascading blonde hair, their matching eye color, and similar facial structure, Streep and Schumer could certainly pass as relatives.

OK, who isn't? But, seriously, Schumer has been known to seriously fan girl over the star. In fact, at the Britannia Awards in November 2015, Schumer creeped on Meryl Streep and Harrison Ford upon accepting her award and realizing how close she was to the A-List stars. Seriously, she is all of us in that picture.

When you think of Meryl Streep, you often think of her dramatic roles in movies like Kramer vs. Kramer, The Hours, and Doubt. However, her more comedic side hasn't gone unnoticed. Between her roles in films like Julie & Julia, The Devil Wears Prada, and It's Complicated, it's clear to see that Schumer fits right into the mix of Streep's comedic tone. A sense of humor is vital to playing the Oscar-winning actress.

When you think of these two, you may not think of singing. However, with Streep appearing in numerous musicals over the years (Into The Woods, Mamma Mia, etc.), Schumer having some kind of vocal chops is a plus. The funny girl has been singing all her life; she shared a video of herself singing Madonna's "Like A Prayer" as a kid, and she continues to sing on her show, Inside Amy Schumer.

5. Yes, She Can Handle Dramatic Roles Too

Her comedic chops and singing ability don't mean that she's lacking in the drama department of acting either. Fans got a taste of her more dramatic side in her film, Trainwreck, and she appears in the 2016 army drama, Thank You For Your Service, alongside Whiplash actor, Miles Teller.

6. They're Both Major Feminists

Schumer has spoken out on body-shaming and Streep has taken action in Hollywood with speeches at Elle's Women In Hollywood Awards and beyond. Both of these women are all about standing up for what they believe in and using their power to make a difference.

7. Because Meryl Streep Says So

If Streep wants Schumer to play her, then she shall have Schumer play her. I mean, who are we to disagree with the actual living, breathing person's biopic request?

Sadly, no official project is in the works as of yet. With the idea now out in the universe and Schumer totally on board, I'm expecting this project to materialize at some point.