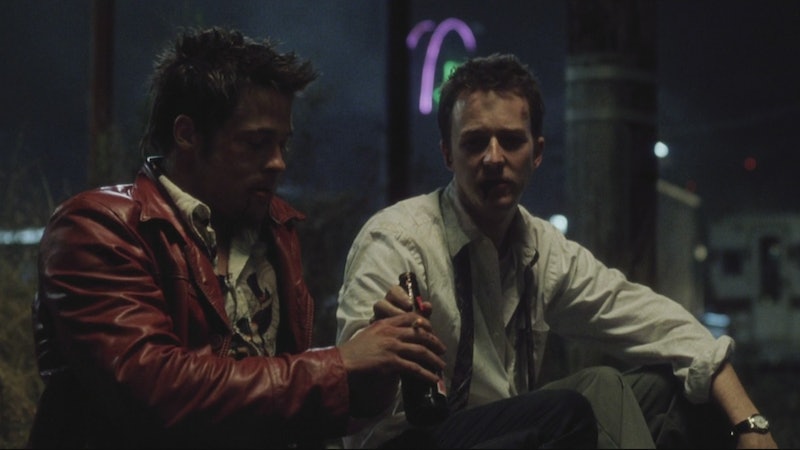 In a video interview with Scribd, Chuck Palahniuk talks Fight Club , 20 years later. The anarchist, anti-consumerist novel struck a chord with fans, and spawned David Fincher's 1999 film adaptation, a comic book series sequel, and an upcoming stage musical. Wednesday marks the 20th anniversary of Palahniuk's postmodern anthem, and the author reveals his inspirations for both Fight Club and Fight Club 2 in the video below.

Spoiler alert: this article will spoil the surprising twist ending of Fight Club. If you have not read the book or watched the movie, take this alert into consideration before continuing to read. You have been warned.

After an explosion at his apartment destroys his worldly possessions and leaves him homeless, the Narrator bunks with his enigmatic new friend. Together, he and Tyler found Fight Club: a weekly, underground meeting where men can beat the living crap out of one another to sort out their feelings. Fight Club soon morphs into an anarchist movement called Project Mayhem, which escalates from carrying out relatively minor pranks to setting explosives around the support beams of the Parker-Morris Building.

The Narrator soon realizes that he and Tyler are, in fact, the same person — two personalities inhabiting the same body — and that Tyler is spending more and more time in control, carrying out nefarious plots, while the Narrator is blacked out. He decides to kill himself, and therefore Tyler, but things don't go according to plan. After surviving his suicide attempt, the Narrator checks himself into a mental health care facility, intending to leave only when he is certain that Tyler is gone.

When Fight Club 2 picks up, the Narrator — who now goes by Sebastian — and his love interest, Marla Singer, are married and have a son. Tyler is now the narrating party. He's lain dormant in Sebastian's mind for the last 10 years, and his plan to return involves Sebastian's son...

In his interview with Scribd, Palahniuk says he combined three short stories — about a man who infiltrates support groups, a man who participates in "consensual fighting groups," and a man who urinates in hotel food — to create Fight Club. He based the novel's structure off of The Great Gatsby and other Great American Novels, in which two of the main characters die so that the third may live on as a witness and testifier. Palahniuk wanted to try out the concept using only two characters, one of which would have two personalities that he would need to reconcile in order to make himself whole again.

Fight Club 2 has Gatsby connections as well. From Palahniuk's interview:

And then I wondered, what would The Great Gatsby be like 10 years later? Because at the end of Gatsby, Nick Carraway was turning 30 years old, and he had to go back to the Midwest; that wasn't the end of his life. What does he do 10 years after that, when he's 40 years old? What will his life be like?

In Fight Club 2 I wanted to revisit the characters 10 years later. To see them making exactly the same mistakes, and assuming the same kind of social roles, becoming the same failures, that they condemned their parents for being.