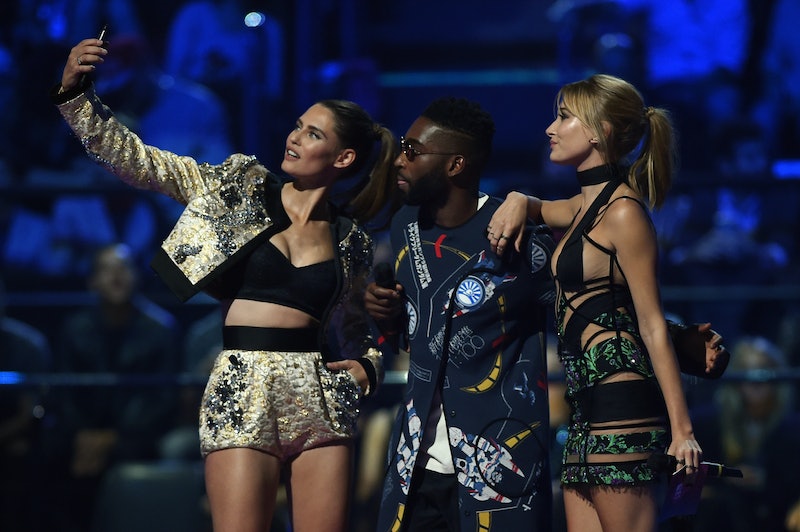 Every year we tune into the MTV Video Music Awards to potentially witness an utterly baffling performance or monumental celebrity shade... and you know, maybe see some videos gain artistic recognition. Yes, it's fair to say the awards at the VMAs usually have to take a back seat to all the tongue-waggling twerking Teddy Bears, not to mention whatever drama Taylor Swift and Kanye Swift are going to get into this year. But, there are in fact golden Moon Men given out year after year, and for those of you who still have emotional stock in who will win accolades for their videos are probably wondering how many awards will be given out at the 2016 VMAs.

In total, there will be 17 awards given out at this years Video Music Awards. The true bread and butter of the awards are the Best Video categories, of which there are eight. Video of the Year is of course the crowning achievement of the night, and I'm particularly eager to find out of Beyonce or Adele will end up Queen of the evening. Even if it's neither, though, that's OK: both divas have nominations in other Best Video categories, such as Best Female Video and Best Pop Video. The Best Video categories are pretty straightforward, each mainstream genre gets a nod, each gender gets a nod, but everyone wants that Video of the Year.

That leaves two more untouched categories — the outliers in the bunch. The first is Best New Artist, an award given out to the break-out star of the year. Up for this Moon Man are the likes of Desiigner, DNCE, Lukas Graham, Zara Larsson and Bryson Tiller. Not sure who has the lead when it comes to this, though; my preference with post-punk probably let these new kids fall beneath the cracks.

The final category, though, is the Michael Jackson Video Vanguard Award. And spoiler alert: Rihanna will be this year's Video Vanguard recipient. In case it's unclear the Video Vanguard Award — also known as the Lifetime Achievement Award — celebrates a particular artist's body of work and contribution to pop culture. You just need to do a quick side glance to last year's "Bitch Better Have My Money" to understand why this year's recipient is so utterly worthy.

The MTV Video Music Awards will start live at 9 p.m. EST, but until then, you can check out the full list of categories (sans Video Vanguard) below... and place your bets accordingly.

Video of the Year:

Calvin Harris ft. Rihanna – “This Is What You Came For”

Calvin Harris ft. Rihanna – “This Is What You Came For”

All Time Low – “Missing You”

Coldplay – “Adventure Of A Lifetime”

Panic! At The Disco – “Victorious”

Calvin Harris & Disciples – “How Deep Is Your Love”

Mike Posner – “I Took A Pill In Ibiza”

The Chainsmokers ft. Daya – “Don’t Let Me Down”

Florence + The Machine – The Odyssey

Missy Elliott ft. Pharrell – “WTF (Where They From)”

Tame Impala – “The Less I Know The Better”