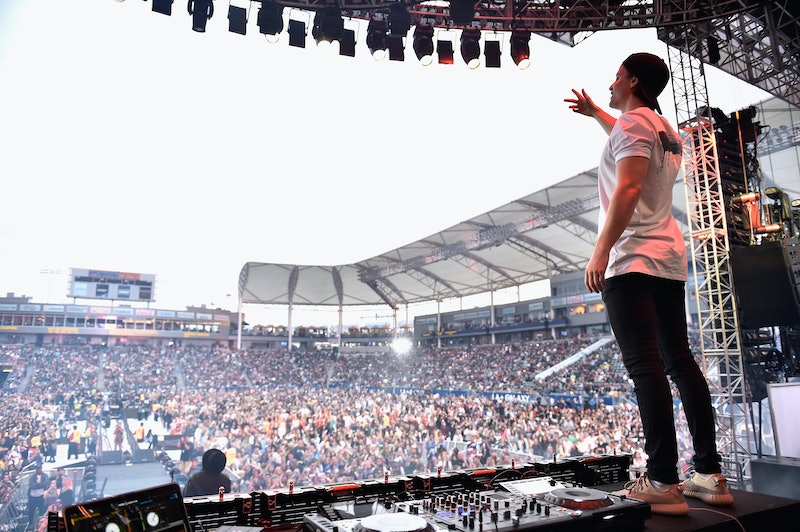 While there is typically less anticipation for the Olympics Closing Ceremony than the Opening Ceremony, Rio will still need to send the 2016 games off in style. And the city will do just that with the performances at the Rio Olympics closing ceremony on Sunday, Aug. 21 at 7 p.m. The Closing Ceremony brings a sense of finality to the Olympics every two years and the 2016 ceremony will be no different with closing remarks from the International Olympic Committee, the transition of the Olympics from Rio to Tokyo, the Olympic flame going out, and — arguably the most entertaining element — artistic and cultural performances. Besides performances reflective of Brazil, Kygo is performing at the closing ceremony, so Rio is wrapping up the 2016 Olympic games with an international flair.

The last summer Olympics Closing Ceremony tremendously benefitted from the fact that it was held in London, U.K., a city and country known internationally for its rock and pop music. The closing ceremony featured a group of British musical artists including One Direction, Annie Lennox, George Michael, the Spice Girls, Take That, and The Who. While I do not mean to take away from their stellar performances (the Spice Girls!), as an American, those artists have been extremely pervasive in American culture, so it wasn't necessarily as interesting to see them in concert during the Olympics. Kygo, an EDM DJ from Norway, is far from unknown since his career blew up after he remixed Ed Sheeran's "I See Fire" and he made the genre of tropical house music popular in 2015, but he'll add a more modern and unique element when he performs "Carry Me" at the Maracanã Stadium in Rio de Janeiro, Brazil on Sunday.

The singing voice on "Carry Me" belongs to Julia Michaels, an American songwriter who has an impressive list of artists she has written for, and she'll also be performing as the vocalist at the closing ceremony. Now is about that time to start wondering why the performers at the Closing Ceremony where Brazil will hand over hosting duties to Japan come from Brazil and America. That would be because Kygo has collaborated with the newly formed Olympic Channel, a worldwide digital platform that will launch in conjunction with the Closing Ceremony at Rio.

While I'm slightly disappointed that the closing ceremony headliner isn't from Brazil, you should still expect to see some cultural performances during the host nation's final moments in the spotlight. Plus, Brazilian soccer legend Pelé is hoping to make an appearance at the closing ceremony if his health allows. But if that's still not enough for you, you can always revisit the best moments from the opening ceremony.

Japan will also get time to focus on its culture as Rio will pass the games over to Tokyo, just like London passed them to Rio four years ago. Tokyo will have a chance to give viewers a taste of what to expect in 2020, which should be a highlight since I remember finding the juxtaposition of British and Brazilian culture in 2012 particularly dynamic.

As the games wind down, the closing ceremony is there to provide a bookend until the next Olympics. And Kygo's appearance will sort of be like an update from the last closing ceremony in Sochi in 2014, which had a focus on '90s techno music. Kygo may not be Brazilian, but his performance will represent the international side of the Olympics — and despite the competitive nature of the games, bonding between nations is really what the Olympics are all about.