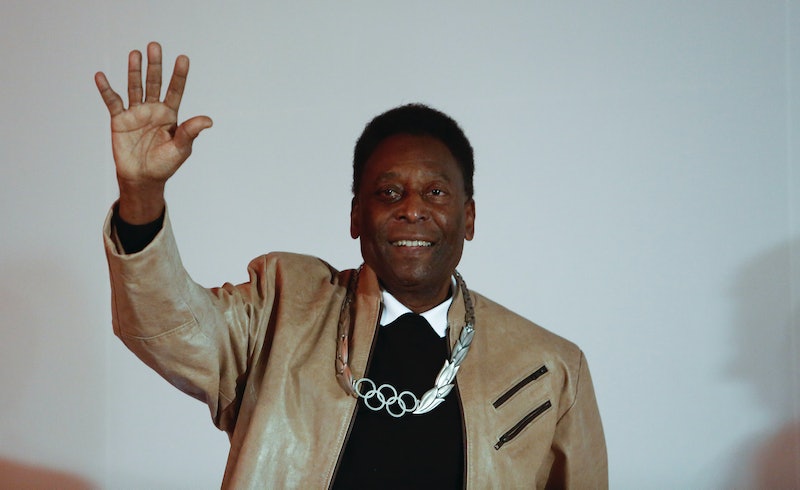 Over the years, certain athletes have become known as legends in their sports. Just take a look at Michael Phelps and his swimming record. And when it comes to soccer, Pelé is remembered as one of the greatest in the world. While the Brazil native was supposed to light the torch at the 2016 Olympics opening ceremony, he had to back out for health reasons. Fans of the games are probably wondering: Will Pelé be at the Olympics closing ceremony on Sunday, Aug. 21? It sure sounds like he's trying his best to be there.

When the retired champ announced his inability to attend Rio's opening ceremony, the 75-year-old wrote on Twitter,

I am continuing my physiotherapy and focused on joining you for the closing festivities on August 21. I love you! #olympics

It makes sense that he would keep up his treatment, in the hopes that he'll be in better shape by the time the closing ceremony rolls around. He hasn't posted yet whether he will actually attend, so he's likely still waiting to see how he feels once it gets closer. But he has been an active viewer of the Olympics thus far, posting commentary and celebrating victories on Twitter throughout. That shows a continued investment in the games.

Although his specific health conditions are unknown, Pelé has a history of battling illnesses, including kidney stones and urinary tract infections. The athlete also had hip surgery and now walks with a cane. On Aug. 5, Pelé released an official statement to the Associated Press, which read:

Only God is more important than my health. In my life I've had fractures, surgeries, pain, hospital stays, victories and defeats. And I've always respected those who admire me.

Hopefully he'll be in good enough shape to join in the final event, especially since the Olympics are taking place in his homeland. What better reason to celebrate? While I'm rooting for Pelé to be there, fans will just have to wait until Sunday to find out.